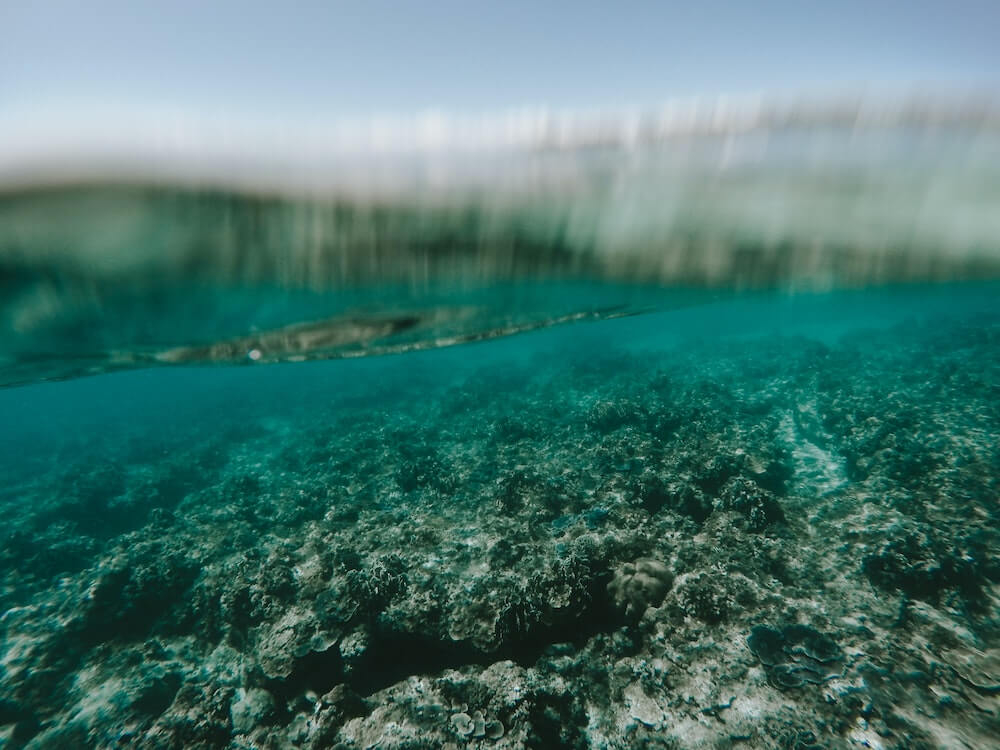 Eight men stood in a loose group on the edge of the Nubava atoll swinging wide their arms and slapping their leathery brown torsos in the cool air as they waited for the first glimmer of the sun. Thirty feet out, a horseshoe of small boats bobbed up and down, weighted fishing nets strung down between them to create a barrier against the open sea. Several hours prior, eight spiny lobsters had been tipped into this curtained expanse of water. The contest would start soon.

A crowd was gathering on the beach, chattering with excitement and anticipation at this ritual that would determine who would lead the Ree’ha’ta people. Many had not been to this coral islet before; it was an evil, haunted place where the reef gods were volatile and had long chased away any sea life that could nourish the tribe. Only the elders and the shaman were permitted to test the waters here, where the Pacific blue beckoned disarmingly, its pristine surface betraying the sharp coral reef and living dangers below. As the morning sun teased the horizon, the holy man led a quiet ancestral chant to a steady drumbeat.

The rules of the contest had passed unchanged down the generations. Every ten years, the Ree’ha’ta people gathered just before dawn on this farthest part of the Kuihoa archipelago, six hundred miles south of Fiji. The eight elders would compete to be first to find one of the crustaceans; the winner would be crowned chief. They were permitted to wear only sandals and a traditional tapa cloth covering and to bear a wooden spear with a single, pointed head. They would be blindfolded and must keep their arms above the waterline at all times, searching only with their feet, in keeping with the tribe’s belief that the feet linked the soul’s eyes to the earth.

“It is time,” said Liana. Tikei waited while his young daughter-in-law opened a large tub of foul-smelling grease that she had spent weeks perfecting. He slathered large gobs generously from his armpits down to his feet before turning so she could cover his back, her swollen belly causing her to grunt with the effort.

At sixty-one, he was one of the youngest in this contest of elders and had been preparing for this event for months, just like his father, grandfather, and ancestors before him. He was descended from a strong line of Ree’ha’ta chiefs who had won the right to lead the tribe many times through the generations. “Your path to success will always be in your preparation,” his father would tell him repeatedly.

Tikei adjusted his tapa made of bark cloth that Liana had waxed and soaked repeatedly to make it sufficiently waterproof. It was uncomfortably tight over his manhood but he needed to be safe. He noted with satisfaction the loose and untreated tapa of several other elders, likely to disintegrate and leave the most delicate parts of the body exposed.

Tikei looked over at the tribe’s chief. “He will be eighty soon and he looks tired,” he said quietly to Liana. She followed his gaze and nodded. “God willing, I will be successful today,” he continued. “I am ready to lead our people on a new path. We must modernize and change to keep pride in our ways and the line of our ancestors strong.” He sighed. “Look,” he said, nodding towards a young boy among the spectators whose features resembled their own but whose skin betrayed a mix of blood. “The combining of tribes will soon dilute the strength of our customs, and the footprints of the Ree’ha’ta people will be lost to history. Our children are being lured by modern technology to slough off their ancestry and only dream beyond our shores. We must forge a future that does not make our children choose between the roots of their past and the branches of their future.”

“Our chief is a good man but set in his ways. Your leadership would refresh our hope,” Liana replied. She checked the greasing on his body, which was well scarred from free diving, prising the mollusks and sea urchins off the rocks. The current would toss him carelessly against the serrated reef, only to pick him up again, caress his battered body, and roll him apologetically towards the shore. He hid the scars under tattoos, masterfully crafted to turn ugly puckering into a mosaic of artwork. It was easier for Alumita, his bedridden wife, to see him that way, assuaging her guilt at not being able to help provide for their family. Life was all the harder since their son had not returned from the sea four months ago. It was Tikei’s duty to provide also for Liana and her child. Becoming chief of the Ree’ha’ta would make all the difference—Tikei and his family would be provided for and plied with unlimited quantities of spiny lobster. Where once this protein-rich food had been fished from these waters by hand with enough meat to fill the bellies of the whole tribe, nowadays the most plentiful waters were trawled by commercial fishing boats, turning the crustacean into the fare of only the affluent.

Suddenly he cast off his sandals. Two of the other elders looked unsure, then followed suit. Good, Tikei thought. The shaman performed a spiritual ceremony, summoning up the four winds of heaven to bless the spirits of the spiny lobsters and the prowess of the hunters. Tikei stood in prayer, quietly calling on his ancestors to make his feet see and feel what his covered eyes would not.

“Here, suck this,” said Liana, popping into his mouth a small piece of cloth soaked in clove juice to deaden his sense of taste and fill his nostrils with its smell. She warmed a ball of wax in her hand.

“May the gods and our ancestors smile on your fortune today,” she said solemnly. She turned his head and molded wax to fill each ear.

Each man was assigned a shamanic guide to ensure the ancient rituals were followed, and they now blindfolded the eight elders. Tikei’s senses narrowed, forcing him to channel his energy into the only sense that would help him win—touch. He was led by his guide through the shallow water to the edge of the coral. This contest had risks and every elder knew it. The waters teemed with sea life that could kill, the currents were unpredictable, and the coral could easily cut a man’s feet to ribbons.

He faintly heard the shaman’s final call to the gods and felt the sun on his face as his guide released him, signaling the start. He waded carefully towards the deeper, more complex part of the reef, where the large corals made perfect bolt-holes. With his spear held aloft and legs akimbo, he started to sidle sideways, crablike, his feet gently probing the nooks and crannies.

A scream carried across the water. Muffled by the wax in his ears, he nevertheless could make it out. One of the elders had stepped on a sea urchin, whose solid spines pierced a thin leather sole as easily as a soft foot. He wouldn’t be able to remove the spine without reaching down into the water, which would mean disqualification, and he couldn’t leave a spine in the sole of his foot — it would at best be uncomfortable, at worst fatal. Tikei had learned that lesson when, aged five, his father had made him step on a sea urchin. “You will feel great pain, but the lesson will keep you safe when I am no longer here to guide you,” his father had said. The boy had screamed as the spine pierced his foot, crying as his father deftly removed it, then cleaned and bound the wound with a cloth soaked in coconut oil. For months before today’s contest, Tikei had run along the unpaved streets night after night unseen until his soles were hard and leathery, enabling him to compete without any barrier between him and his prey.

Another scream. Coral, perhaps. The cut would be deep, swift, painful, and bloody, and the elder would be eliminated to avoid fresh blood attracting predators. Tikei noted the increase in his chances and tried to focus on what his feet were telling him. He shifted cautiously left and right, turning over his ankles slightly so that the soft skin would pick up the nuances of the reef. “You must learn to listen with your feet as well as you listen with your ears,” his father had told him as a boy, teaching him to maneuver in coral-filled waters on moonless nights as well as by day.

With six men stressing the waters, Tikei was unsurprised when he heard another cry of agony and felt the wake from an elder’s panic-filled thrashing of water. Sea snake, he guessed. These reef devils would be angry at the disruption of their territory and the bite of a banded sea snake was venomous. He flinched as he felt one winding around his own body, searching. It was repelled by the thick grease which contained Liana’s concoction of paraffin, cayenne, and Fiji Bongo chilies. The snake circled, looking for a way past the tapa into the softest part of Tikei’s body but the binding was tight.

Five elders left, he reckoned, and eight spiny lobsters. The odds had improved but the waters were alive with danger. He was twenty-five feet out now, wading through a smack of Portuguese men-of-war, whose tentacles hung like innocent nursery mobiles above the reef bed but could make a grown man scream.

The hair on the back of his neck prickled. He stood stock-still. He moved his big toe, causing the slightest of movements and felt the echolocation. Another miniscule twitch confirmed it. In one fluid motion he drove his spear head down into the reef for balance and dug down with his left foot to dislodge the animal from its hiding hole. He felt his skin tearing against the rock and knew he had to be quick before he bled profusely. He felt the spiny lobster move, and with exquisite judgement he stamped down, landing his left foot along the crustacean’s body and pinning down its walking legs. He winced as the coral sliced into his foot, leaned hard on his spear, and stepped down with his right foot to the animal. He gripped the spear in both hands, ran the tip up the hard carapace, and drove it into the animal’s neuron concentration for an immediate kill. Stepping back, with a huge upward thrust he raised his speared prey high out of the water with a triumphant cry and heard the roar from the crowd on the beach.

He tore off his blindfold, dug out the wax from his ears, spat out the cloth, and turned towards the cheering, chanting, singing, drumbeating crowd. He saw Liana on her knees, crying with joy and praying her thanks. He waded back to shore, leaving a reddening trail in the water behind him. The contest over and the leader decided, the other elders followed him, while lobster pots were thrown from the boats for the remaining seven prey; nothing would be wasted. Liana would tend to Takei’s wounds and they would all feast well tonight at the ceremony to crown Takei Mataitoga the new chief of the Ree’ha’ta people.

Raised in England, I have been in the US since 1999. I lived and worked in London, Paris, and New York during my 30-year career in the financial services sector as a trader, product manager, and research analyst. I moved to Southern California in 2013 when my husband became ill and took care of him till his death last year. During this time I co-authored four children’s activity books, two of which won Family Choice Awards. I am still finding my writing voice.