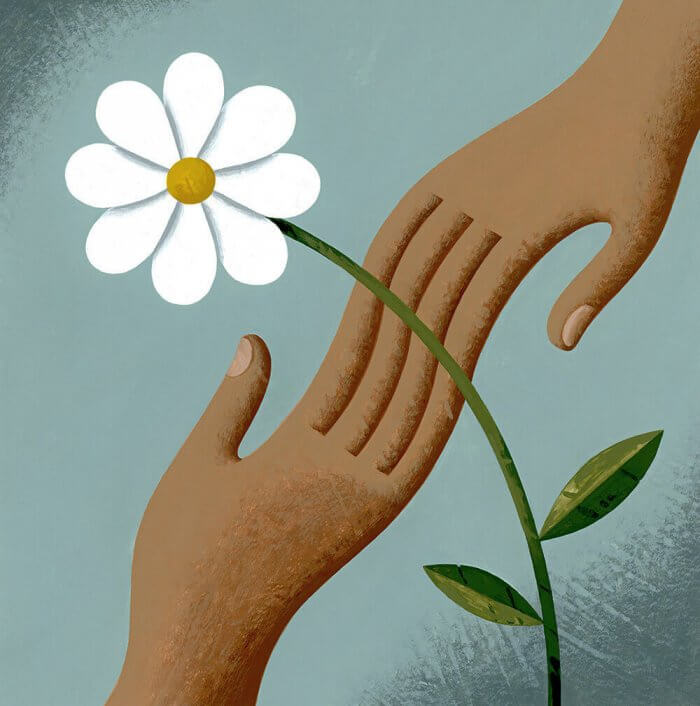 The ventilator whirred mechanically, patients’ chests rising as the oxygen pumped through their lungs. Donna stood by the man she had seen intubated hours beforehand. His breath at times steadying momentarily was a forced gasping rattle. She wondered who he was.

A middle-aged man with greying hairs amongst patchy brown. Quite possibly handsome, aside from the current predicament. His youthful face now drained from the sensation of drowning. He was in the throes of acute respiratory distress syndrome, as a result of the virus. Watching him, Donna’s own breath belaboured beneath her mask.

In a while, she would leave. Haunted by the wondering of how he is doing. Whether he would make it through the night. The process afterward if he did not, she now well knew. A nurse would hold a phone over his dying body and loved ones would watch and wait over the phone until his final lasting breath. His body would be removed then down to the morgue, soon after a private closed casketed funeral. No wake for the mourning. Chapels did not have holy water anymore; they anointed with bottles of hand sanitizer.

She left the room. Standing in the hallway, watching through the window. His pale pallor. His chest. The sound. She could hear the oscillated sounds of the other ventilators all around her. The gasps of each exhale. This had once been the ICU. Then the COVID19 ICU. Now the whole hospital was deemed a Nightingale. They had gone from being outnumbered to now empty beds. Lying in wait for the next case to come.

‘Done for the day, Don?’ Adhibu asked, walking past with a file in hand.

With a jolt she shook out of her haze. With a yawn, she nodded. ‘I’ll be on call tonight.’

In the changing room, she removed her visor to see the red welts it left on the crown of her head. The warmth of the hospital-built sweat inside the latex gloves, heat dripping from the layers under her plastic apron. Peeling her uniform off, she pulled on a loose shirt and baggy trousers.

Outside the hospital, she felt the air on her skin and the impending dark night enveloping in. Her eyes adjusting to the dimness finally out from beneath harsh sterile lighting. She stopped in the shop across the road. A line formed outside. It was longer from social distancing and the separation of the crowd. A teenage boy stood guarding the door. She pulled a black mask on. Held up her ID and was let ahead. A man eyerolled over his mask, but she had seen worse. People shouting at NHS workers for skipping the queue. Telling them they were taking the piss. A particularly pointed comment about fat nurses.

Donna grabbed a sandwich, some crisps, a drink and some chocolate. It was too late to order room service and she couldn’t cook in the room. She paid at the self-checkout and left with a plastic bag. On her way back to La Brise Hotel, she did not check her watch. It was a Thursday evening at 8’o clock. The terraced council houses, the balconied flats and the bungalows all had rainbows in their windows. Everyone out in their gardens, checking their watches and then the cheering and the clapping began.

She blushed nervously as she passed, watching them in a curious manner. The people quarantining indoors, self-isolated from the world. They had all lived different experiences of this event. Cancelled weddings, long school holidays, no way to stay with loved ones. The people working from home, furloughed waiting to go back, and the people who lost their career in an instant. The people who’d had the virus and those who passed from it. The homes full of elderly suffering with it, nurses unable to leave. The people who lost their homes with their employment. Those to whom staying in was more of a prison, longing for escape. It was the cheers of people who, despite everything, had this ongoing determination to celebrate something. All the lonely people desperate for human connection. The clapping died down, but that was no matter. They would all see one another next week. Eventually, all the neighbours returned inside, keeping way for their own safety. She had to admire that.

She could not think of much else, just the patient etherised upon the bed. She felt her jaw lock, only realising she had been clenching her teeth by the pain lingering when she stopped. The beginning of 2020 seemed like a century ago. Donna rushed through the lobby avoiding eye contact with the receptionists. She worried about the tallying up of her eventual fee once she ended her stay at the hotel which was not in her pay much less in her budget. Shrugging off the financial strife yet more sacrifice. A way to protect her parents by staying away. They, like most people, didn’t understand anyway. She knew from a small bathroom mirror; she had gained wrinkles of experience since.

In the shower, a question resurged and regurgitated in Donna’s thoughts. The occasional remark which lingered. ‘You chose that career.’ ‘It’s your job.’ ‘Isn’t this what you signed up for?’ She blinked. Imagining a cold beach holiday years ago. Standing with her back to the waves. The sand pulling from her feet, tide rolling in, wave engulfing her. She let herself sink. Then coughed, pushing up, breaking the surface. Her eyes red-rimmed, she coughed up salt water.

She ate alone, scrolling through her phone. Endless art projects, baking efforts and lockdown gardens of people taking this time for the luxury of hobbies. Read an article about the education system not knowing what to do. She wondered what she would be doing if she were to remain in. Had the course of her life run in another direction. When Donna was fifteen, she had to pick the subjects she would study. From there, determining her A levels, her degree and life prospects. She had hovered over ICT and geography or biology and physics. Weeks in, she missed the programs she would never learn and the ecologies she would never study. Soon she was applying to university. By then it was too late to turn back. She could not decide after the midwinter break of her first year at nursing school she would prefer to learn about the diaspora of peoples or the accessibility of the internet to connect everyone. Instead, her world shrunk to the size of a hospital.

Donna switched off the lights and lay in a bed which was not her own. Gazed up to the stucco white ceiling until her eyes shut. Pulling the quilt over herself. Elapsing into sleep, she dreamt she had finally arrived to the dry land of a distant shore. The phone rang. She woke to start again.