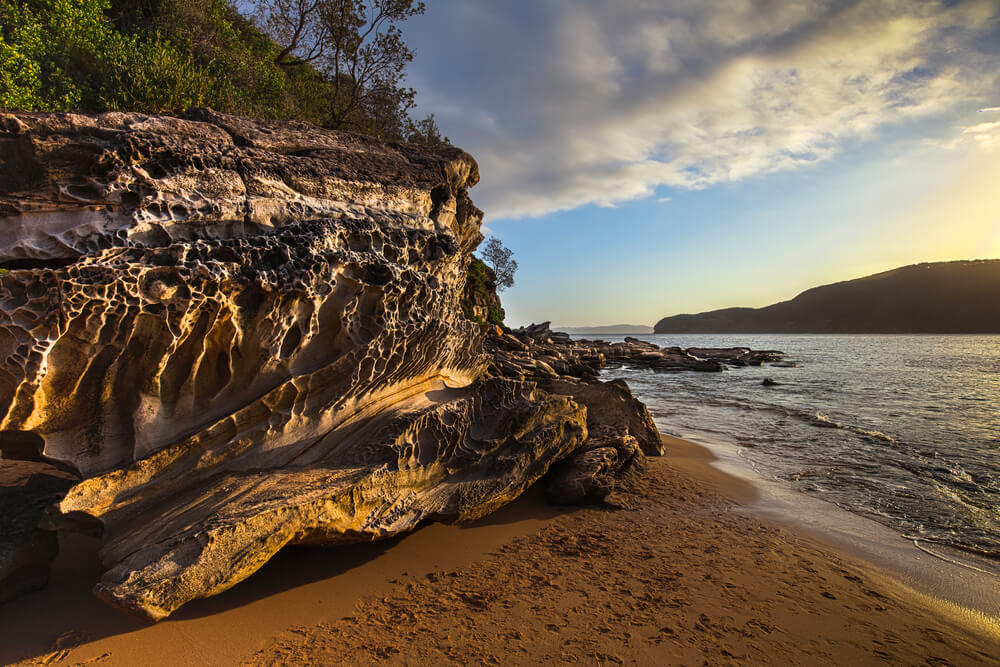 The headland rises before the horizon like a giant lion’s paw, sun bleached and golden. Morning mist lifts above it in a soft mantilla of grey gossamer. You can just hear the breakers over the heavy equipment, the banging of gears and the blades of the bulldozers scarring the earth. Wattle birds panic, flit frantically from banksia tree to banksia tree, their nests crushed and destroyed beneath yellow metal machinery. Wallabies, kangaroos, brushtail possums left months ago. Giant black tyres and metal tank tracks crush, deform and scar the headland.

To Breeze’s ears the throbbing engines are out of place. It’s rape. It’s pillage. It’s all things greed and sacrilege and it’s heavy on her heart. From early morning there has been a convoy of heavy trucks to cart the earth away from the headland. They line up in rows and wait their turn. They’ve journeyed twenty minutes from the depot in town. She can feel the heat from their engines and undercarriages.

The night before, fixings for the tripod were constructed from long willowy trunks of coastal casuarinas and hidden in the bush. It takes three activists less than thirty seconds to erect it in the path of the bulldozer, less than four seconds for Jamie to climb to the top and chain himself to it. A cheer rises from the crowd of protestors.

In the distance the mobile cherry picker approaches. It clanks and shutters, wobbles and jerks, a long-necked metal dinosaur with a limp. The cherry picker exhales an industrial sigh as the driver eases the breaks and parks alongside the tripod. Armed with heavy bolt cutters, two policemen climb into the picker’s bucket. The bucket, slow and awkward, rises into the sky. A policeman leans out of the basket to grab Jamie. The second policeman holds his belt. The young cop is far too slow and awkward, Jamie far too fast and agile. Suddenly, the cop leans back into the bucket while the second cop leans forward with bolt cutters and cuts through the chain. They reach for Jamie. He backs away. The bucket pushes against the top of the tripod lifting one leg. It leans over and begins to topple. On the ground the police close in, surrounding the tripod. It’s now or never. Jamie leaps from the tripod, rolls on his shoulder and is up on his feet running. Elegant. Graceful. He sprints away. Thin, wiry and fast, tattered shorts and ragged poncho-like smoke blown in a gust of wind, he faints and dodges through the police cordon. It’s no contest. He flies over the rutted ground like a hare fleeing hounds. A second cheer from the watchers on the sideline.

Breeze dives under the truck, rolls onto her back and shoves a length of heavy metal pipe over the driveshaft. Holding a padlock and the chain ends, she shoves her hands into each end of the pipe. The rutted dirt digs into her back. Feeling with fingertips, she struggles to hook the shackle through ends of chain and shove it into the lock. Her fingers are long, delicate, the pipe narrow. She scrapes the skin from her knuckles, feels the blood. She’s practised this time and again but can’t get the shackle to slip into the opening of the lock. Grit from the truck falls in her face. She squints, averts her eyes. Diesel, grease, smoke, dry dirt and fumes sting her eyes, throat and nose.

The spectacle is over. Work can commence again. Sarge leans against the patrol wagon, shakes his head, smiles ruefully. The little bastard was fast. The site manager approaches.

One of them has chained herself to the driveshaft of a haul truck. We can’t fucking move it. It’s blocking the road.

Shit, says Sarge. He chews his lip to keep from laughing. The engineer, slow to see the irony or humour in things, would not be slow to take offence.

The Sergeant shakes his head and walks to the truck where the girl has entrenched herself. He’s learned a number of things since this assignment started, one of them is that there is an acute lack of people skills with every engineer he’s met on site. What’s to be done?

He squats, looks beneath the truck. The girl is on her back with her face turned away from him, her hands shoved in the end of a pipe that is over the top of the driveshaft. She’s tall and thin in the dust, wears ragged shorts and a faded flannel shirt. Her long legs are tanned from the sun. Her dreadlocked hair is tied in a rough ponytail.

Miss, he says, can we talk?

The girl turns her head towards him. Grey eyes glow out from the shaded dark like a wounded animal’s. He’s startled by their fierceness. Tears have left tracks through the dust on her cheeks. She’s smeared black war paint around her eyes. She’s striking in a wild and feral sort of way.

We can talk, she says.

Her voice is measured, tight. She’s hiding the pain. Sarge knows these things. He’s a better cop for it.

We need you to come out from there. It’s dangerous.

I know that, she says, but this is important. You know it’s important.

He’s taken her mind off the pain, reinforced her purpose. Her voice has found strength. Resolve. She’s been under the truck for less than thirty minutes. The pain is crushing her. It’s on her face, in her eyes, in her voice. She can’t last long.

You think this right? Does not taking sides mean you’re not allowed to think?

I’ve heard that a few times since I’ve been here, he says.

Doesn’t make it any less true.

There’s no win there. He changes the subject. Have you got a name?

My people call me Sarge.

My people call me Breeze.

This is getting us nowhere, Breeze. You have to come out.

I’m chained and padlocked inside the pipe. It’s too late, even if I wanted to. Even if the pain and dust and heat were getting to me I can’t.

The girl laughs. Please, Sarge, not now and not here, things are tough enough.

He rises to his feet, his knees pop, quick strain and pain. Not as easy as it used to be. Another five years and he can retire. He’s looking forward to it. She’s got guts, he thinks, as he walks back to the patrol van. Bruce is waiting for him, his hands on his hips, the tired world-weary smirk on his face.

Well? What do we do? asks Bruce.

We have to get someone to cut through the pipe. Can’t use a torch, too dangerous, a leak in the fuel line and the whole thing will go up.

Okay. You want to take a torch to the pipe, Bruce, you go ahead but I’m advising you against it, and believe me if it goes south, you’re going to be in deep shit and more than one person will be burned alive.

Hey, I was joking, says Bruce.

Not funny, says Sarge. You know, Bruce, I’m beginning to agree with the protestors. You’re a dick.

That’s not called for, says Bruce.

Hey, I was joking, says Sarge.

That makes it even, says Sarge.

She can deal with pain. She’s a woman. Women handle pain better than men. It’s science. She thinks it’s about childbirth and menstruation. She can’t remember exactly. Her back is numb. She can no longer feel her arms. The pain has travelled down to her shoulders and neck. She can’t stop the tears. She doesn’t want to cry. She doesn’t want people to know she’s suffering. The man with the hacksaw is having trouble. The pipe is too close to the bed of the truck and there is little room to work. He has taken the blade from the hacksaw. He is just using the blade now. It’s a narrow fit and slow going. Every stroke of the saw blade travels down to her shoulders with stabbing pain. She’s held things up. It has to be hours now. She knows the numbness in her back and arms will dissipate and pain will return with even more intensity. She yields to it, closes her eyes, breathes deep and slow, encourages her mind to travel to her happy place, swimming through the surf, watching terns skim the surface of the sea, listening to wind over the water. It’s hard with the smell of diesel, the heat and the noise. She works at it. She listens to the steady stroke of the saw against the pipe. She breathes with its rhythm. It somehow works.

The sun is straight up in the sky. A gentle wind off the sea makes the heat tolerable. Tempers flare. The truck driver had threatened to kick the shit out of the girl. Sarge had him escorted from the site. It’s getting warmer now and the girl must be cooking under the truck. He leans against the patrol wagon, sips tea from his thermos and eats his sandwich. He nods towards the young constable.

See if you can find a bottle of water and give the girl a drink. We don’t want her dying of heatstroke under our watch, he says.

The young constable nods, ferrets a bottle of water from the van and jogs towards the truck. Sarge watches him go. He’s a long, tall lanky lad, all knees and elbows. Jogging does him no favours.

The constable returns. His face is flushed. He’s upset.

Not your problem, Constable. She knew what she was getting into. The constable nods his head. He’s not convinced.

It’s been a long day. Sarge walks to the headland. The sun is low in the west, only an hour or so from dropping behind the coastal range. It’s beginning to cool. He looks out over the sea. It’s a beautiful place. Always the same. Greedy developers, pressures to expand. He can almost sympathise with the protestors, but he doesn’t. He’s a professional. The radio at his belt buzzes, he answers. The message is clear. The court case in Sydney has gone in favour of the protest. Work is ordered to stop. The news spreads quickly. Machinery retreats and disappears. The mayor and his developer mates will be apoplectic. The blocked truck stands stranded and lonely.

Sarge walks back to the patrol wagon. The young constable approaches.

How’s the girl going? They cut through the pipe yet? He asks the young cop.

No, Sarge. She couldn’t get the shackle into the lock. She’s been faking it all along. When she found the work was finished, she just pulled her hands out. She can’t even stand up without help. Her mates dragged her out from beneath the truck. She couldn’t do it on her own. They had to lift her to her feet. He blinks back tears. Sarge pretends not to notice.

In the distance he watches the girl, limp and exhausted, wobble and stagger like a drunk on a binge. Two Rastafarian-haired protestors support her. It’s quiet now with the machinery shut down, only the steady sound of the surf pounding the beach nearby and the distant cry of a gull skimming the surface of the sea. The crowd breaks from the sidelines, gather around her, lift her to their shoulders. A rousing cheer shatters the stillness.

Christ all fucking mighty, says the sergeant. They deserved to win this day.

Alpheus Williams, curmudgeon, pagan, pantheist, loves his wife, nature, good whisky and dogs, lives and writes in a small coastal village in Australia with his wonderful wife and their border collie. His works have appeared in The Molotov Cocktail Winners Anthology, Barren Magazine, Storgy, The Write Launch, The Fabulist Magazine, Shotgun Honey, Bristol Noir, Bath Flash Fiction, et al. He has been long listed on Bath Flash Fiction and Wigleaf . Two stories have been nominated for the Pushcart Prize 2021.