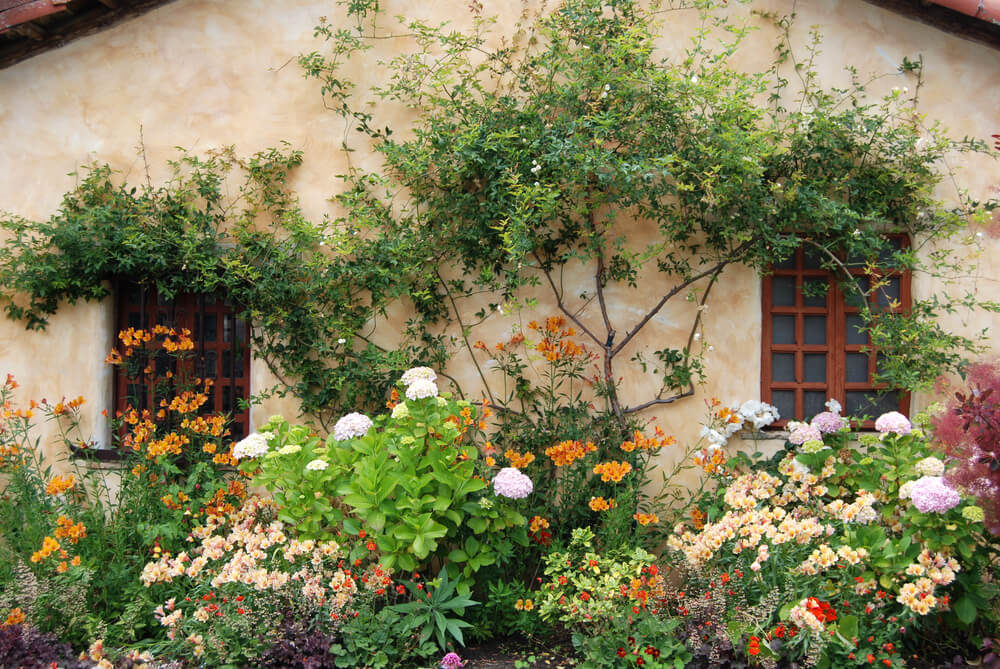 Once upon a time there was a great forest that stretched for miles and miles along a tranquil river. The river was wide and long, and the azure water glimmered like crystals. If the river was followed deep enough into the wood, there could be found a small cottage tucked beneath the bosom of a mountain. The cottage was covered in countless flowers, and berries, and all sorts of vined things that grew out and up from a large garden. Inside the cottage there lived a little girl and her mother. This little girl was the sweetest, most docile child one could encounter. She had large eyes the color of umber and dark curly hair that shone reddish-brown in the springtime sun. The little girl loved to have her hair wild and unruly like a lion as she played amongst the flowers and other living things, but most mornings her mother would sit her down, comb out the tangles in her long tresses, and twist her mane into two large buns, resembling that of two combs of honey, which is how the little girl came to be called Honeybun.

Though Honeybun was a splendid child, she was lonely—which is understandable when one lives deep in an endless wood far from any towns. One morning, after her mother had combed her hair, and twisted it into two large buns atop her head, instead of playing in the garden with the countless flowers, berries, and other vined things she set out along the river in order to find a friend. She walked for what seemed like hours, listening to the gurgling of the river.

“River,” she asked, “are you the friend I am looking for?”

The river splashed and answered, “Dearest Honeybun, what is any friend when you have the greatest treasure?” Honeybun was confused by the river’s answer. She was certain she had no friends, for she lived deep in an endless wood, far from any towns. “Hmph, much like a river to babble in riddles. They never give straight answers. I will just keep walking until I find a friend,” she thought to herself. And keep walking she did. She walked for a whole day until she came across a large raven perched on a low branch. Her legs were tired by this time and she seated herself down on a large, flat stone beneath the branch.

“Raven,” she asked, “are you the friend I am looking for?”

“I beg your pardon?” The raven asked, startled. He stared intensely at the little girl.

“Are you the friend I am looking for?” The raven thought for a moment. He then looked at the little girl and answered, “I can be your friend, but what is any friend when you have the greatest one of all?” He flew down and sat beside her on the branch. Then he offered to keep her company on her journey. It did strike Honeybun as peculiar that both the river and the raven spoke of a great friend that she already had, for she was sure she hadn’t a single friend, as she lived deep in an endless wood far away from any towns. Still, she was glad for the company of the raven, and together they continued following the river.

They traveled together for another day until they came across a wolf. Honeybun asked the wolf if perhaps she was the greatest friend she was searching for. The wolf replied, “Where is your pack, little girl? Surely you’d find a friend among them.” The girl thought about this and answered that she had no pack. The raven shrugged and suggested they carry on until they reached the town. The little girl had never been to a town before. She was astonished that they had traveled for so long that they would be reaching the edge of the wood she once had thought was endless.

After a few days more Honeybun and the Raven reached the town.

“Surely here I will find the greatest friend,” Honeybun said to the Raven.

“Perhaps,” the Raven answered reluctantly, “this is where our time together ends. Good luck to you, little girl. May you find what you are looking for.” With that the raven flew back into the forest and the girl darted into the town. She was certain that in the town is where she would find her greatest friend. For how could she not in a town filled with so many new people?

The excitement she felt while entering the town quickly dissipated. In this town she met a group of children that gawked, pointed, and laughed at her honeycomb hair. They teased her so viciously that she began to cry, and the group of children left her alone in her sadness. The little girl found a pile of hay. There she plopped down and continued crying. No one came to comfort her no matter how long or how bitterly she sobbed. Honeybun found herself lonelier than she had ever been. As the sun began to set, the girl’s sobbing transformed into sniffling. “I will be lonely forever,” she said, “even here in this town full of people, there is no friend for me.”

“What do you mean, girl?” asked an old crone who had seen the girl crying there as she was passing by. “Surely you know the greatest friend a little girl could ask for is the one she already has.” When Honeybun turned around to reply, the crone was gone, and the girl was alone again. This caused her to cry once more and she did so until she was in a deep slumber upon the hay.

As Honeybun slept, she was visited in her dreams by a beautiful enchantress. The raven who had traveled with the little girl was perched on the arm of the enchantress. Honeybun saw the raven and the enchantress speaking, but could not make out their words, until the enchantress came close to the girl and asked, “Why does such a sweet girl cry for strangers?”

“I cry for I am lonely, ma’am. All I want in this world is the greatest friend. The river spoke of one I have, as did the raven, and the wolf, but they are wrong. I haven’t one at all.” Then Honeybun told the enchantress in detail about her travels, and about what the river, the raven, the wolf, and even the mysterious old crone had said. The enchantress’ silver eyes glowed; she smiled at the little girl and asked if she might help.

“You have traveled far and wide to find this greatest friend. Perhaps a bit of my magic might help you find what you are looking for.”

And then Honeybun awoke.

Honeybun rubbed her eyes and looked down in her lap. There she found a small glass bottle filled with a strange elixir. Tied around the neck of the bottle was a note written in glittering golden ink. It read:

“Repeat these words:
‘Joy of the heart, sweet as a tart, a friend for my own from the start.’
After drinking of the bottle you will find yourself in the arms of the greatest friend.”

Honeybun sang the charm and before she had even finished her last gulp she found herself being embraced in the loving arms of none other than her mother, who had missed her terribly in all the days of her absence. The mother kissed the girl on her forehead and cried, “Oh, my darling, Honeybun. I have been so unbearably lonely without the laughter and smile of my greatest treasure! I thought I might never see you again. Where have you been for so long?!” This made Honeybun light up; she forgot all about how she had once been lonely and hugged her mother tighter than she ever had before.

"Honeybun and the Greatest Friend" is my ode to the fairy tale. Growing up as a small black girl with a German grandmother, I was read endless fairy tales. These stories have inspired my studies academically and personally as they are the most socializing narratives. My grandmother shared these stories with me as rite of my 'ancestral' heritage. However, as I got older, I found that my experience as a mixed person, who was not visibly mixed, was and is far different than that of my grandmother. I found myself wishing that in those stories, there was a place for little brown girls, who looked like me and lived in fairy tales too. And so, The Adventures of Honeybun was born as a gift to my mother, to my grandmother, to myself, and to Black and Brown girls and women everywhere.