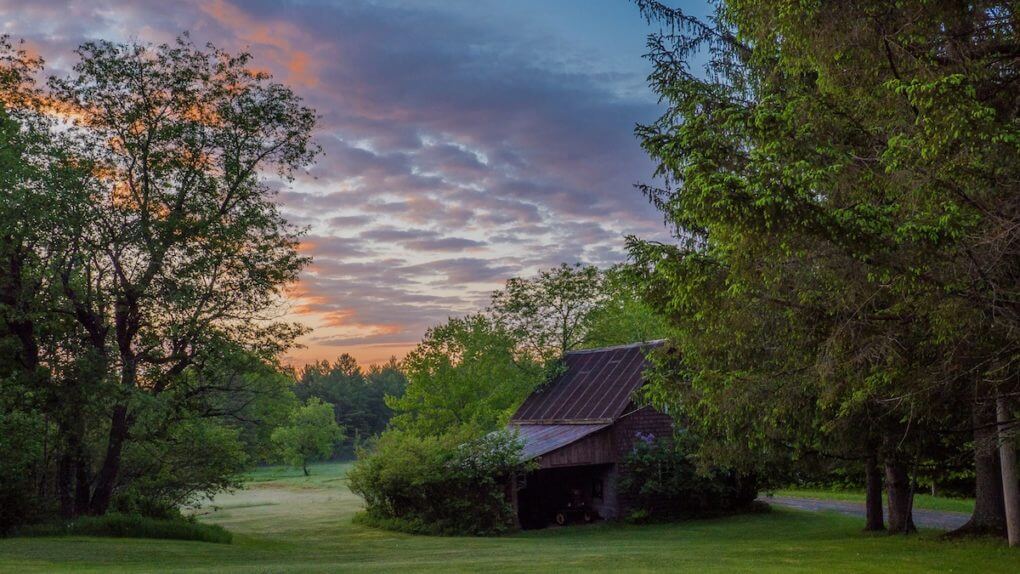 “I want to go to Miss Landry’s farm.”
Margaret looked at her brother quizzically. That was not the answer she expected when she asked Peter how he wished to celebrate his thirty-fifth birthday.
“Where?”
Peter sat at the kitchen table of Margaret’s home, finishing a cup of coffee. He stopped there when his uniform delivery service truck route brought him to her neighborhood. After clearing his throat, he repeated the wish in his soft, precise tone: “I want to go to Miss Landry’s farm.”
Margaret wiped off the red counter trimmed in chrome. It gave the kitchen the look of an old diner. Instead of an expensive kitchen remodel that she and Clyde couldn’t afford, she decorated the whole room with nostalgic Coca-Cola and Hershey signs, red chair cushions, and chrome napkin holders.
“What is that?” she asked.
“You know.” He paused. She continued cleaning. “Seventh grade field trip.” Peter economized on words.
Margaret set the rag down. “Hmm. Do you remember where it is?”
Peter shook his head. “A bus took my class there. It took hours.”
Margaret gazed at Peter’s serene face that masked the other world that lurked beneath his detached demeanor. A different place existed somewhere deep inside her little brother’s mind and soul. While he functioned in this world, present enough to make a living and get along with people, another one played through his essence. A better one? Perhaps. Margaret didn’t know because it was a secret world. When they were children, Peter often traveled to this place.
The sound of a key in the front door distracted her. When Clyde walked in, Margaret tensed up. “Clyde! I didn’t expect you home. Anything wrong?”
“Don’t be so jumpy, Marg. I simply forgot something.”
She dried her hands with a red and white striped dish cloth, even though her hands weren’t wet. “Peter stopped by for coffee.”
Clyde nodded toward his brother-in-law and gave him a terse smile. “I can see, Marg.”
“Do you want a cup?”
Clyde started walking towards the living room. “No time. I’ve got appointments.” Margaret watched him walk towards the bookcase. She slid away from view as he reached inside the enclosed bottom shelf and grabbed a flask of whiskey. Tears welled up in her eyes so she stepped out of the kitchen into the enclosed sunroom.
A row of mourning doves perched atop the neighbor’s wooden fence. Margaret absently watched them. Clyde startled her when he wrapped his arms around her from behind. She turned around and embraced him, and he kissed her.
When he pulled away, he told her, “I love you so much.”
“I love you too.”
“I’ve got some good leads on these new electronic games. The Danny-Dean. Named after the two college geniuses that invented them. They’re a cross between the Merlin and the Simon, and they’ll blow both of them away.”
“Sounds super,” Margaret said.
Clyde sighed. “Nobody says ‘super’ anymore, Marg. It’s 1978 for Chrissake.” He paced around the sunroom. “I’m getting in on the ground floor. Believe you me, if I play my cards right, I’ll be in charge of the whole midwest territory.”
The Danny-Deans were Clyde’s latest “get rich quick” project.
“Ten—count them—ten games in one, and kids can also buy an attachment to make them a walkie-talkie.” His small green eyes shined like tiny emeralds. “Nothing else on the market comes close.”
Margaret feigned a smile. “I hope they take off. I really do.”
Clyde stepped back. “You don’t think they will, do you?” he snapped.
“I didn’t say that, Clyde.”
His voice rose. “I can tell by your voice!”
“Nothing’s a guarantee, that’s all,” she said gently. She reached out and squeezed his hand. He drew her into another tight hug. When Peter walked into the sunroom, Clyde sighed and stepped back. “Well, I better get going. I’m running behind today.”
Peter walked outside in the backyard and picked up a small, skinny twig that lay in the mulch surrounding a birch tree. Margaret watched as he reentered the sunroom, stuck the twig between the partially-opened window and the screen. He dangled it in front of a mosquito hawk trapped inside.
“Come on, boy. There you go,” Peter cooed. When the rescued insect clung to the twig, Peter brought it outside and released it.

After Peter left, Margaret sat down at her typewriter in the corner of the living room that doubled as her office. Before starting on her transcription work, she telephoned St. Christopher Elementary School. She vaguely remembered a Miss Landry, the school librarian, way back when Margaret and her brother attended the school in the early 1950s. The “library” consisted of an old classroom in the back building that Miss Landry turned into a nice little reading nook for the students. Maybe someone at the school could help her find out about this fabled farm that apparently remained stuck in Peter’s mind.
Late that afternoon, Margaret drove her Chevette out to Cottage Gardens, where Peter rented a two-bedroom home. She admired the well-kept lawns reminiscent of English gardens; her brother performed the work for many of them. She walked up to the raised front porch and knocked on the door.
“Hello, Margaret. Come in, please.”
When she entered, she wondered why Peter lived such a solitary life. His home did not reflect that of a bachelor who stayed to himself. No clothes were strewn around the place, no dishes piled in the sink. He kept an inviting, comfortable place.
“I have two things to talk to you about if you have time.” She brimmed with excitement.
Peter turned off the local news. “I sure do. Would you like tea or something?”
“Sounds good!”
He led her to the tidy kitchen and set two cups and saucers on the butcher block table. As he filled the kettle with water, she noticed the obituary section of the newspaper folded right where Peter usually sat. Whose obituary was he concerning himself with? Nobody she knew had died. She tried to read the names upside down from her vantage point. She couldn’t come out and ask Peter. No. If she got too inquisitive or pushy, he retreated.
“Here you go.” Peter poured hot water over the tea bags. “And here’s the cream and sugar.”
Margaret added the condiments to her cup, and Mr. Cuddles, one of Peter’s rescue cats, jumped up on her lap. Margaret stroked the feline’s head as he purred. “First, I found Miss Landry’s farm.”
Peter raised his eyebrows.
Margaret bubbled as she spoke. “I went to the school to see if anyone there might remember or know something about it. Anyway, Miss Landry’s niece now works at the school—she works in the office—a sweet lady. And guess what?”
“What?”
“It’s now a hobby farm, and the Landry family still owns it.”
“Do they allow visitors?”
Margaret grinned. “They do! They have a blueberry and blackberry patch, and they let people come pick them, fill buckets, and buy them. There are picnic grounds and a walking path. It’s only about 90 miles from here.”
A contented smile formed on Peter’s face.
Margaret stirred her tea. “I’ll bet Dad wished he could have gone on that one. He grew up on a farm.”
Peter looked at her, started to speak, but then checked out into his own little world. A vague fragment of memory flashed in her mind as she recalled their dad getting angry over something to do with this farm. Maybe she just imagined it when she saw Peter retreat.
Margaret spoke up. “The niece….you know, Miss Landry’s niece that gave me the information?”
Peter nodded with his head; his eyes were far away.
“Like I said, she’s a sweet lady. I’d say she’s mid-thirties. Lovely smile.” Margaret shifted her position in the chair. She leaned forward and whispered, “And she’s single.” She blinked her eyes at him.
Peter shook his head. “I don’t know, Margaret.”
“How about just meeting her? I can arrange for you two to have coffee.” She paused. “What harm could it do?”
“I’m not that interested. Sorry.”
She sighed. Her brother feared the complexity of relationships. “I know Mom and Dad argued a lot. And Clyde isn’t exactly the Prince Charming I dreamed of as a girl. But he’s a good man at his core and he loves me, Peter. You don’t want to live out your life alone, do you?”
Peter shrugged. “Let’s just say I’m not a formula person.”
Margaret raised her eyebrows. “Formula person?”
“Graduate college, get a job, get married, buy a house, have kids. I don’t think that was ever meant for me. And I’m okay with it.”
Margaret sighed. “But you’re smart, you’re kind, you’re good-looking. I hate the thought of you being alone.”
He stroked the head of another rescued cat that rubbed against his legs. “I’m not alone. And I’m at peace.”
Margaret set Mr. Cuddles on the floor and stood. “I have to get home. I promised Clyde fried fish tonight, and I still have to go to the grocery.”
Peter stood to walk his sister to the door. “Fried fish disagrees with you.”
She paused and glanced at the newspaper on the way out. The name “Timothy O’Toole” struck her. She committed it to memory “Me? I’ll just heat up a can of soup. Would you like to come over for dinner?”
Peter shook his head. “No thank you.”
Margaret always dreaded leaving him alone despite the fact that he seemed to crave solitude. Before she finally got married to Clyde a couple of years ago, she dreaded evenings that turned into long nights alone; she joined book clubs, yoga classes, disco lessons, anything that got her out amongst people. “I’ll pick you up Sunday for a day at the farm then?”
Peter simply nodded.

Piper Templeton’s first book, Rain Clouds and Waterfalls was published on Kindle in May 2014. She followed it up with a women's fiction/mystery set in New Orleans, Beneath the Shady Tree. Piper volunteers for a reading program for second graders, hoping to instill a love of reading in them. Her second novel Beneath the Shady Tree is available on both Kindle and print.