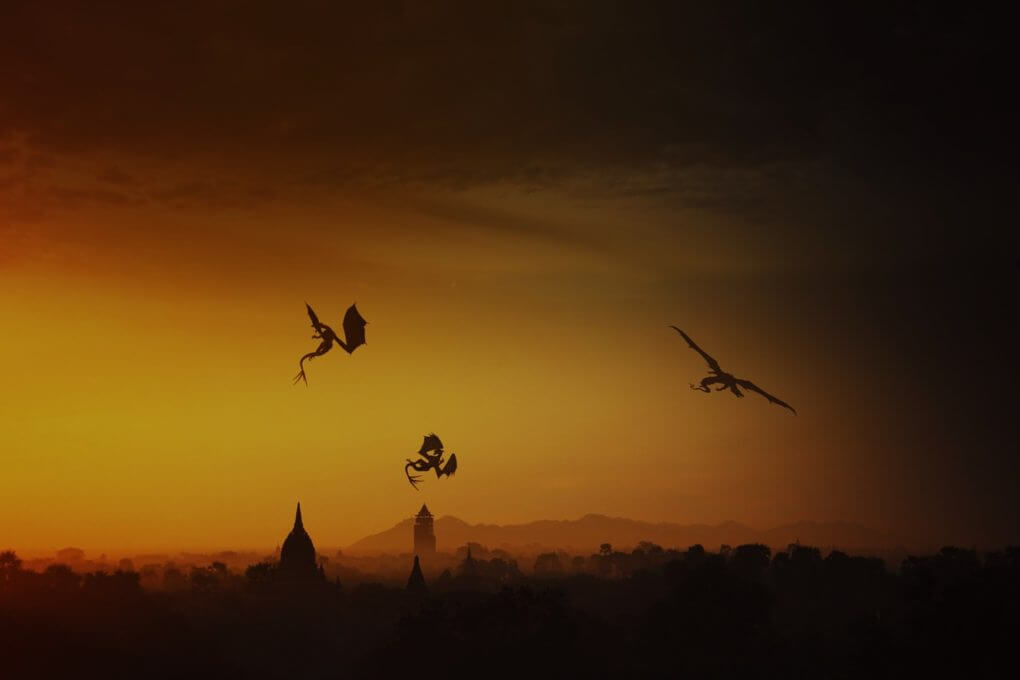 Thunder echoed in the distance as the rain pelted down, the cold, fat drops of water crashing against the traveler’s cloak. Tattered and frayed at the edges, one could tell from a distance the cloak and its owner had seen far better days. Shuffling forward in the darkness, the figure finally reached the doorway of a ramshackle inn at the end of the street. A battered and faded sign hung above the door, the faded gold letters spelling out ‘Dragon’s Tale Inn.’

Grasping the iron ring in the center of the door, the traveler struggled to pull the heavy door open, the thick iron hinges groaning in protest. Slipping through the narrow opening, he stumbled into the dimly lit room beyond as the thick oak door slid back into place. A warm glow came from the room beyond, as he shuffled forward in hopes of finding shelter from the storm. The traveler lowered the hood of his cloak as he entered the room, the smell of roasted meat and old beer hanging heavy in the air. The young man appeared to be in his early twenties, but there were dark circles under his eyes and his face was covered with the stubble of a beard beginning to grow. His long dark hair was matted from the rain that had soaked through his tattered cloak, and sadness was etched into his face. The once roaring fire in the large stone fire pit in the center of the room had now burned down to embers, but it still cast a flickering light throughout the large common room. Well past midnight, the patrons had all gone to their rooms and only a young servant girl remained.

“Oh!” she gasped as she turned and saw the young man standing in the doorway. Dressed in a simple woolen frock, her long brown hair was tied back into a long pony tail that cascaded down her back. She was so startled by his sudden appearance she almost dropped the large tray of dirty dishes she had just gathered from the last table.

“S-s-sorry,” he stuttered as he stood there shivering. “I didn’t… I didn’t mean to startle you.”

“Oh, it’s okay,” she said quietly as she set the tray down on the table and brushed the hair from her eyes. “I just didn’t see you come in, is all; we don’t get very many travelers now, since the war.”

The young man started to answer but faltered, stumbling forward and catching himself on the chair. Rushing forward, the young woman helped the stranger to a seat near the fire pit.

“You look exhausted,” she said as she tossed a log onto the coals and sent sparks flying up the metal chimney. “You warm yourself here by the fire, and I’ll see what’s left in the kitchen to eat. I’m afraid it may only be stale bread and some cheese; the rations they give us are barely enough to keep this place open.”

The young man looked up at her, his blue-grey eyes rimmed with darkness, and he almost managed a smile as she bustled off to the kitchen. A few moments later, she returned with a wooden board and set it on the stone of the fire pit next to the young man. There was half a loaf of dark, crusty bread, a block of crumbly yellow cheese, and a large mug of steaming mulled cider. As she placed the food next to him, he shook his head and smiled sadly.

“Nonsense,” she said as she handed him the mug of warm cider. “You’re exhausted and freezing; now drink this and eat while I put another log on the fire. Gold is the last thing I worry about these days,” she said as she gazed into the fire. “It’s only a matter of time before the darkness swallows us all, and I want to spread as much kindness as I can before the end.”

It had only been six months ago when the demons and their minions had burst forth from the mountains in the north. The dark horde had overwhelmed every army they encountered, and soldiers were now fighting delaying actions as long as they could to allow civilians to escape. But the enemy’s numbers were endless, and mankind was now encircled. The old alliances had faded away, as humans considered themselves to be better than the elves, dwarves, and other races. When the war came, the elves remained hidden and protected deep in their enchanted forests, and the dwarves rested easily in their mountain fortresses. Mankind’s only hope had been the dragons, who had left a standing pledge of loyalty over a thousand years before, promising to return when called. Generation after generation, the Dragonheart family served as summoners, the ones who could cast the spell to summon the dragons back across the dimensions. But when the war came, the last of their line had failed. Reading through the ancient tome that contained the details of the spell, the young man learned the summoning could only be completed with a sacrifice – the spirit of the spellcaster. Unwilling to face death, the last of the Dragonheart family had fled.

“Th-thank you,” the traveler said, breaking the girl’s train of thought.

She shook her head and wiped away a tear with her apron. “Please, don’t thank me. I meant what I said. I still believe in helping people, even if others don’t.” Picking up the iron poker, she stirred the logs in the fire, sending another shower of sparks up the chimney and flooding the room with warmth. “My name is Mairwen,” she said. “My parents built this inn, and now it’s all I have left to remember them. When the enemy first came, they demanded a sacrifice in order to leave our village alone. Since my parents had moved here from across the sea, the villagers all agreed they should be the ones to die. I was spared because I was born here.”

“I… I’m so sorry,” he said as he placed the mug back down on the wooden serving board. “That is horrible.”

Mairwen sat on the edge of the hearth and looked down at the young man. “I may not have much left, but what I have I share with you.”

“Your heart is filled with kindness,” the young man said. “I have met so many in my travels, all filled with anger and suspicion and hate. Sometimes I think they have become the demons themselves.”

The young man stood up, steadying himself on the edge of the fire pit. Mairwen reached out and helped him as he pulled his cloak back over his shoulders.

Ignoring her, he pulled on his gloves and muttered something under his breath as he plunged his hands into the fire and brought out a handful of coals.

Mairwen screamed as the young man turned and walked to the front door, kicking it open and striding out into the rain. Running out into the darkness behind him, Mairwen watched as he knelt on the cobblestones and placed the mound of hot coals on the stone. The embers hissed and sizzled angrily as the cold rain pelted down and the young man stood up and threw his head back, his arms stretch skyward.

His tattered cloak billowing about him, he shouted skyward in a language Mairwen did not recognize. “Draconum il’Shawath, poh nahvek ta koh!”

As she watched, the embers at his feet flared brightly and the ground began to shake. Flames burst forth from the stones and swirled in front of the stranger in a rainbow of colors as the cobblestones popped and cracked. Mairwen could feel waves of heat washing outward, when suddenly the air was filled with a thunderous shriek. As the ground split open, the swirling form of a dragon erupted and formed out of the flames. Soaring skyward, it flared brightly and exploded in a flash of light and sound that echoed across the night sky. Mairwen watched as bright flashes lit the sky in the distance, as if in answer to the pyrotechnics. As the flames flickered and died down, she saw the young man stagger and fall back, collapsing on the pavement.

Running to his side, she fell to her knees as she struggled to pull him towards her. His head resting in her lap, he looked up at her and smiled.

“What happened? Who are you?” she stammered not understanding what she had just witnessed.

“My… my name is Jael,” the young man said, struggling to speak. “Jael Dragonheart.”

Mairwen gasped at the words, realizing what had just happened. “My God! You’ve… you’ve called them haven’t you? But… but that means…”

“I will die,” he said simply, finishing the sentence for her. “The spellcaster must freely give his spirit, or the spell will not work. I have called them. They will come. It… it is my gift to you, in exchange for what you gave me.”

Mairwen shook her head in disbelief. “But, I didn’t give you anything but some scraps of food…”

“You gave me far more than that,” said Jael.

“But I don’t understand! What did I give you?” she asked as tears started streaming down her face.

“Hope,” he said simply, his voice little more than a hoarse whisper.

A brief shudder rippled through him and his eyes slowly closed, as the last wisps of his spirit soared upward, leaving his broken body crumpled in her arms. Flames flashed brightly across the sky as roars thundered and echoed in the distance. The dragons had returned.

An avid reader of science fiction and fantasy novels all his life, Michael Radcliffe published his first novel, The Guardian’s Apprentice in 2010. He has written four novels and seventeen short stories, most of which feature characters and creatures from the world created in his first book. During the day, Michael is the Chief Risk Officer for a regional community bank. Michael lives in rural Kentucky with his wife and their seven cats, and enjoys spinning stories out of the wisps of magic around him.