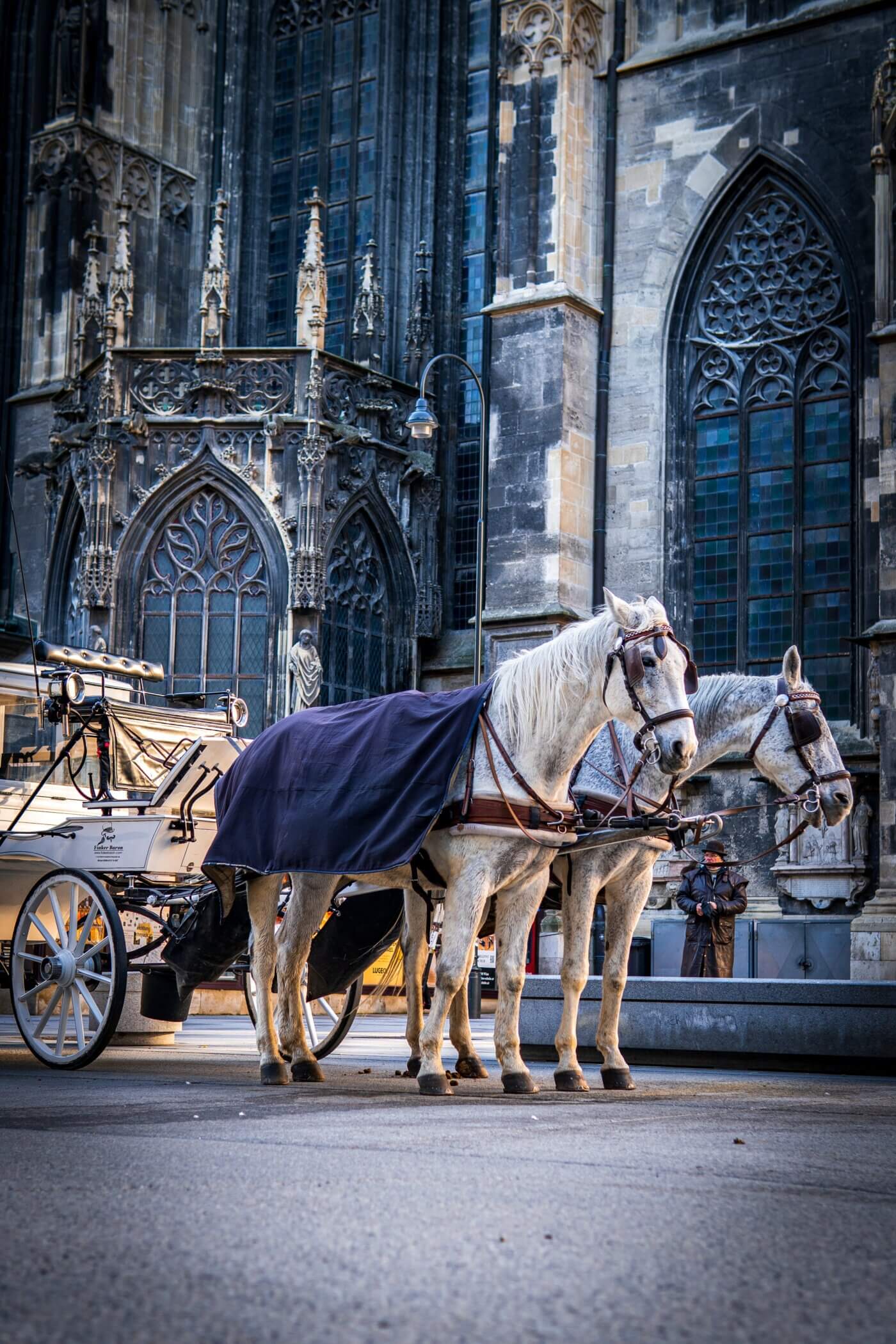 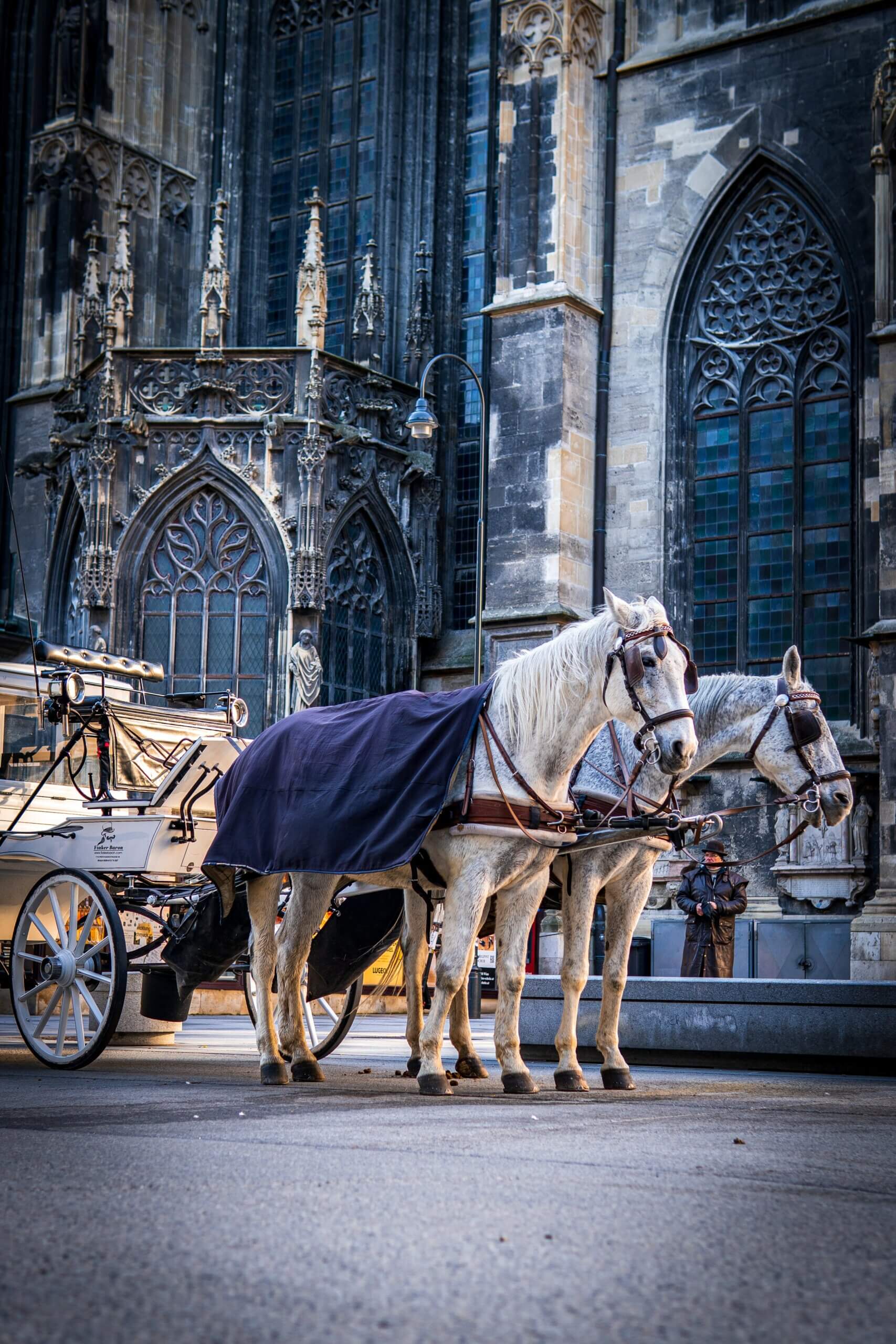 Photo by Anton on Unsplash

A black, speeding phaeton overtook them. Four black stallions raced down the Ringstrasse, their black plumes billowing like smoke. The driver held his hat as he passed the promenade where whispers filled the space in his aftermath.

“Why Mary, that is the Crown Prince himself.”

“He drives his own carriage?”

“Always,” said Frederic, peering down at the laced hand of Mary. She had only arrived in Vienna the day prior. “We would love for you to join us at the symphony tonight. Strauss will be debuting his new arrangement.”

“You think such of everyone.”

“You’ll be pleased to know the Crown Prince Rudolph will also be there. Alone,” he added.

Mary’s airy laugh perfumed the air, and she rested her dimpled cheeks on Frederic’s arm.

The promenade was equal part trees and grand buildings. The Emperor had reconstructed the entire boulevard recently. White, ornate marble surrounded them. The palace gates had immediately closed after the phaeton entered, but Frederic caught the Prince’s black coattails and cane on the steps entering the palace. That will be me someday, he thought. He knew the other families snickered whenever the parvenu arrived, but he would make sure they were remembered. The young men of Vienna were infatuated with the arrival of Mary. Her dark tresses were braided into the latest fashion, curling around her ears.

Mary smiled. “We will steal the show.”

That evening, the Great Hall came into view before their carriage stopped. Frederic recognized the red façade and elongated windows near the top. It was a neoclassical Greek temple. Vienna’s aristocracy thought themselves above them, and yet they couldn’t help borrow the architecture of his people. Frederic’s Greek roots were well known, as were his ambitions.

“Sir, would you like to wear the narrow lapels this evening?” Earlier while dressing, Frederic had looked past his reflection to see his young Serbian valet, Gustav, holding up two jackets.

“Yes, let’s give them something to look at.”

Frederic slid into the silk seamlessly and reviewed his dark features in the looking glass. His hand ran along the curved mustache, carefully groomed for the occasion.

In the Great Hall, two-story chandeliers hanging from the ceiling glittered. Their reflection on Mary’s diamond necklace dazzled. Frederic knew all eyes were on them. He led Mary and her brother Franz to their box, the most expensive money could purchase. He knew from the guards stationed outside that Rudolph had not yet arrived. He had paid the Prince’s escort a hefty price.

“The powder room attendant can help you with that,” he said, watching Mary adjust her muff and matching stole.

“It would be best to receive help,” Frederic repeated.

Mary gave him a curious look, one eyebrow raised. She excused herself, and Frederic soon heard a commotion at the end of the hall, culminating in Mary’s laughter. He smiled to himself, knowing the introduction had been made.

Franz turned back to him with a mischievous grin. “You arranged it, did you?”

“I put the opportunity before her. The rest was fate.”

Frederic agreed the rest of the program was a bore. Mary did not appear in their box for the entire evening. They didn’t have to look to hear her voice from the Prince’s box beside them.

It had been three months since the symphony. Frederic and Franz sat in the morning room looking out onto the main boulevard before their home. Money could buy the most coveted real estate, but not an introduction at Court. Frederic stirred his coffee with urgency. No matter how many years in Vienna, Frederic preferred the thick texture of Turkish coffee. His valet was at the door when Mary was announced. She entered carrying a small envelope. Her signature mink stole covered her pale shoulders even as the January air chilled her skin pink.

Frederic glanced at Franz who looked as surprised as he was to see Mary. “You must have had an enjoyable few months to ignore your favorite cousin.”

“I wanted to see you before I go.”

Frederic opened the sealed card. Inside, hastily written, was an invitation to hunt at Mayerling. “The Prince’s lodge?”

Mary smiled. “He has asked that I join him. You are both brothers to me, and Rudolph could not deny me the request.”

“This is moving quickly,” Franz said, taking her hand. “Is this prudent?”

“I’ve never been so sure of anything in my life.” Her eyes had a feverish sparkle.

Frederic smoothed down his cravat before speaking. “We would love to join you. You know if he were to make you his mistress, then we would be at your service.”

Mary’s smile grew wider. “Of course. Rudolph would welcome your counsel. He has already said as much.” With that, Mary kissed them both and exited the same way she appeared.

Frederic recalled the incident last spring while leaning back in the rococo chair. The old crone was right. He and Gustav had visited the witch of Mayerling before. Her small, dilapidated building stood at the edge of the river.

“Please let the witch know we’re here.” Gustav had walked ahead, announcing their presence. The door opened, and Frederic saw the crone sitting at the table, a stack of cards before her.

“You’ve finally come to see me.”

“Mama can be convincing.”

“Indeed,” she had said, shuffling the deck. “Choose a card and turn it over.”

He chose one seldom touched compared to the worn edges of some others. The crone looked at it and removed the deck.

“What is it?” he said, a feeling of unease in his gut. The old woman stared at the card.

“Go. There is nothing more to see.”

“Go!” Her gnarled finger pointed at the door. Her assistant, a young girl opened the door. Frederic had gathered his coat and left.

“What a crazy old crone!” he had shouted to Gustav behind him. The boy seemed to have been delayed, and when he finally appeared, his face was ashen. “Did she say something?”

“She called you death and I, the beginning. We are two sides of a card.”

Frederic had shaken his head, laughing to himself. “She might be getting along in years. If our fates are intertwined, I can assure you one thing.” He took the boy by the sleeve and squeezed his hand. “We are going to the top.”

The boy had nodded sheepishly. “Yes, your Grace.”

Back in the morning room, Frederic had shouted, “To Mayerling!”

Franz stared at the space Mary had occupied moments before. “Do you think it wise for us to allow her to continue this way?”

“No one questions the speed of the rising sun. My dear Franz, it is our turn to shine.” Frederic caught the arm of Gustav and spun him around as if in a waltz. “Our bags!”

In the velvet interior of their carriage, Franz dozed. Frederic had the cabin ordered from the same company as the Prince. Everyone knew Princess Stephanie was barren after the birth of one child, a girl. Mary would fill that void. Frederic envisioned palace dinners and a title that befitted him.

He looked across at Gustav, smiling. “You might find yourself the palace steward one day.”

The young boy’s eyebrows knit together for a moment. “Certainly.”

The hunting cottage was a palace within Vienna Woods. They stopped at the apex of the circular driveway and servants exited to receive them. Frederic frowned at the absence of the Prince. Mary floated towards them, hand extended.

“We are so fortunate to have your company.”

“Not fortunate enough to welcome us,” muttered Frederic.

“Don’t be cross. Rudolph is feeling unwell. He has headaches sometimes. More reason for you to be of help.”

Frederic was pleased by this, and Mary pushed it further. “Once the old king dies, Rudolph plans on naming new dukes. You are certainly high on the list.”

Inside, wood crackled in the large, stone fireplace. Mary pulled her shawl higher around her shoulders.

“Are you quite well?” asked Franz, observing his sister’s face appear sullen for a moment.

“Yes, quite, thank you. Especially now that you’re both here,” she said, mustering a smile. Frederic was lost in his vision of the future and did not take notice. He might need to act soon. At dinner, the Prince ate alone in his quarters. A footman appeared at the door before dessert, whispering in Mary’s ear. Her eyes fluttered after he was excused.

“The Emperor! He arrives tonight.”

Franz reached towards Mary’s hand. “Has he come to put an end to this affair?”

“It’s possible, but he won’t be able to convince Rudolph. I know with the certainty of life that he cannot tear himself from my presence.”

“I should like to meet the King,” mused Frederic.

Franz looked at him like seeing a stranger. “His Royal Highness would certainly require us to be presented at Court first.”

“Perhaps,” said Frederic. He looked to Mary who was visibly vexed by the news of the Emperor’s impending arrival.

“Please excuse me,” she said, pushing back her chair before the butler could intervene. “I will need to ready Rudolph to receive his father.”

“In what state must the Prince be in to dine in his room and not even know his father is en route at this very moment? The circumstance might be more dire than we could have hoped.”

Franz looked at Frederic with the same hardness. “Frederic, can’t you see my sister is clearly distressed by her situation? How can you think of furthering yourself at her expense? She is beyond her abilities.”

“On the contrary, I think she was groomed for this moment.”

The sound of horses roused them from their argument. Frederic went to the window and witnessed the Emperor helped out of the carriage. He left Franz alone in the dining hall while he walked discreetly down the servant stairs, masking his footsteps on the thick carpet.

“I don’t care if he’s feeling unwell. I will remove that courtesan from here myself if I have to. She must go today. I require tea. And send the Prince to my quarters. Now!” roared the Emperor.

Frederic returned to his own chambers and awoke Gustav from his adjoining room. “The Emperor has arrived! Brew a pot of tea and place this within,” Frederic said, removing a white paper packet from his breast pocket.

“Bring it to his Royal Highness and tell him the Prince will join him shortly. Hurry!”

As Gustav left, the witch’s warning came to him. “Run from death! You are the beginning.” He brewed the tea as instructed before stirring the powder into the pot.

“Gustav, what are you doing here?”

He spun around to see Mary standing behind him. “I was told to brew the Emperor some tea.”

“No need for that, he has his own servants,” she said with a sad smile. Her hands reached past him. “I’ll take this for you. Tell my cousin I will see him in the morning. There can only be good tidings in the morning.”

Gustav watched as Mary took the tray from the counter. Part of him thought to stop her, but another decided whatever plan his master had for the Emperor would be good enough for the Prince.

The sound of screaming awoke Frederic the next morning. He ran outside to see servants weeping in the hall. Entering Gustav’s room, he found it empty.

At the collapsing river cottage, there was a knock.

“Open it,” commanded the crone. The young girl cracked open the door and spoke a few muffled words to the visitor.

“He wants money for the train to Sarajevo.”

“Give him whatever he needs. His journey is only beginning.”

The girl reached into her skirt. She handed some coins to the young valet from the Baron’s household. “Good luck, Gustav.”

“Call me by my birth name, Gavrilo.”