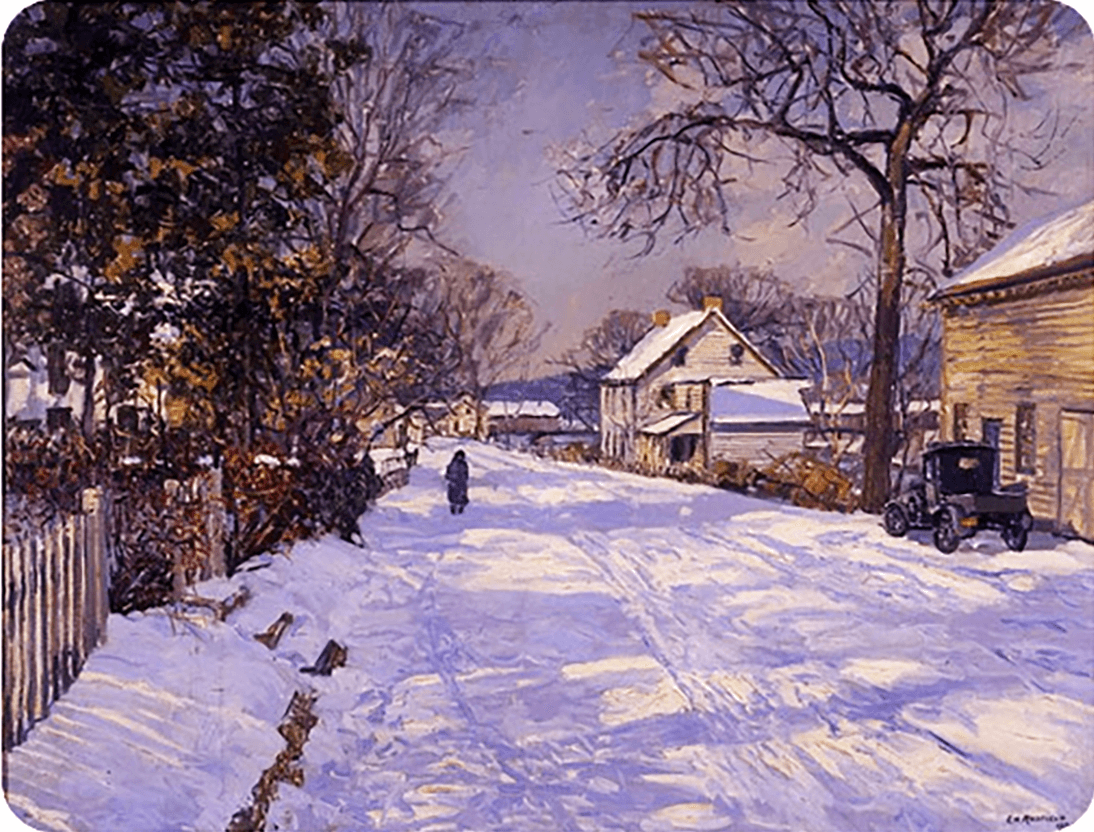 I have always loved snow scenes.  I am not talking about snow: I find snow to be brutally cold and harsh.  Even snow’s whiteness reminds me not of purity but of a world devoid of color and nuance, a world that has had the life bleached out of it.

But I do love snow scenes: the works American painters are so fond of, in which the sorrows and miseries of the world disappear beneath a patina of soft, unbroken whiteness — a landscape different from anything one might paint in spring or summer or fall.  Such paintings beckoned to me when I was quite young, and they have touched me ever since.

There is an art museum in town.  Housed in a beautifully well-preserved Victorian mansion, the museum contains the works of some of the Delaware Valley’s finest painters: portraitists from the nineteenth century and landscape artists from the nineteenth and twentieth.  The works are not the geometrical shapes and randomly applied splotches that the twentieth century so adored: the paintings in our museum are totally, defiantly representational.  And as the town has become more and more hectic and citified, I have found myself spending more and more time in the museum — trying, perhaps, to reconnect with the gentler world that I knew and that the paintings so artfully depict.

It was there, one Sunday afternoon, that I first saw the painting.  I was amazed that I had not noticed it before, but then I reflected that it had been placed in its own alcove in an exhibition room I never visited.  The museum apparently loved the painting as much as I would, for it was perfectly positioned and illuminated; but from the corridor where I walked, it was largely invisible.

The painting was of a small town: not an affluent suburban town like my own, with handsome old houses and tree-lined streets, but rather an old factory town located strategically along the Delaware so as to take advantage of the water and railroad grid that facilitated the distribution of its products.  Now, as the painting so poignantly showed, the town was hopelessly and perhaps irretrievably run-down: one more abandoned and irrelevant factory town in the Eastern Rust Belt.

But it was not sociology or the industrial economics of the painting that moved me; rather, it was that the work was a snow scene, painted, the museum informed us, in 1930.  The Great Depression had recently closed in, and one sensed that if there had been any hope for the town’s recovery, the Depression must surely have destroyed it.  The stores shown in the painting were closed, the only car was a ramshackle pickup truck parked beside one of the stores, and the entire town seemed to be sheathed in white, as if all its life had been frozen in place, perhaps never to be revived.

And yet, trudging through the snow, her back toward the viewer, was a woman, the only living creature to be seen.  She was all bundled up, as well befit a frigid winter’s day, and she seemed slightly bent over, as if walking with considerable difficulty into the wind.  Moreover, the snow appeared to be at least a foot deep, and I certainly could not say where this woman was going or how long and arduous her journey might prove to be.

But she was alive; and that frozen, depressed, largely abandoned factory town was her home — indeed, her world.  To her, it made sense; to her, it was where she lived and where she strove, in her own way, to meet the responsibilities and find the happiness that rounded out her life.  I had been offended and even appalled by the crowding and noise and the increasing aggressiveness of the town where I lived; but in her world, in her winter’s world, there was, I was quite sure, a quiet and a simplicity that in my world had been lost.

I stood before that painting for almost an hour.  I left it for a time to look at some of my other favorites, but I found myself coming back to the abandoned factory town and the woman struggling through the snow.  When I exited the museum, it was closing time, but I often returned to ponder my snow scene and reflect on the simple and intensely natural life that it depicted.

My own life has not been going well.  As a lawyer and sole practitioner, I have never made a huge amount of money, nor have I wanted to.  But in the last years of the twentieth century, as the legal profession became more and more specialized and, it seemed to me, ever more brutal, the number of my clients diminished, and I have added to my income by slowly using up the savings I cobbled together from my practice.  Because I live in a rather large house that was an inheritance, and because I have tried, in my way, to help my church and several local charities, people assume that I am wealthy; but in truth, I have always known that by the end of my life, there would be little in my estate except for the house and a few rather elegant antiques that have been in my family for generations.

It was my wife’s last years that, more than anything else, depleted our savings.  Her death was a slow, painful process, littered with two major operations, radiation therapy, drugs, and several stays in the hospital.  Even with the help of insurance, the attendant expenses and nursing bills were formidable.  And it was not merely money that was depleted: I could not work or even function as I watched my wife suffer, and I knew I was losing the one person I had ever cared for.  In the end, I felt I had no particular reason to go on living, and I stopped taking the cardiac medicines that my wife had always laid out for me.

So in time, like some aging village eccentric, I became a regular at the museum, and I would sit on a banquette in front of my snow scene and contemplate every brush stroke, every color, and the exquisite balance of light and shadows that made the painting such a masterpiece.

Even today, despite the harsh December wind blowing outside, I trudged slowly and somewhat painfully across town and up the stone steps that led to the museum.  I placed my hat and overcoat on the banquette, and I sat before my painting.  At one point, I thought I saw a brilliant flash of light, and then I felt a deep pain within me.  That scared me for an instant, but the pain passed very quickly.

I looked at my painting and I thought: “Why, that’s a beautiful world in there, so peaceful, and I think…I would like to get a better look.”  I rose from my seat, put on my hat and coat, and moved toward the canvas.  At first, I thought I would be cold because it was winter and there was all that snow.  But when I set foot on the snow-covered, nearly deserted street, I wasn’t cold at all, but warm and comfortable and secure.

I moved forward as quickly as I could, because I knew that I had to catch up with the woman who was easily a block ahead of me.  And though she was moving at a steady pace, I persisted, almost to the point of bounding through the snow, till I finally reached her just as she was about to turn a corner and perhaps forever leave the street where I had so often seen her.

I tipped my hat, as I always did when greeting a lady, and I said: “Excuse me, madam, but may I help you with your journey?”

She turned to me and smiled, and for the first time ever, I saw her face.

Marvin Harold Cheiten, a Princeton alum, spent many of his days in college writing plays, short stories, and poetry. Ten of his plays had their premieres at Princeton's Hamilton Murray theater. "A Cat's Tale" is the essence of a one-act opera being created by librettist Cheiten and composer Michael Gilbertson.