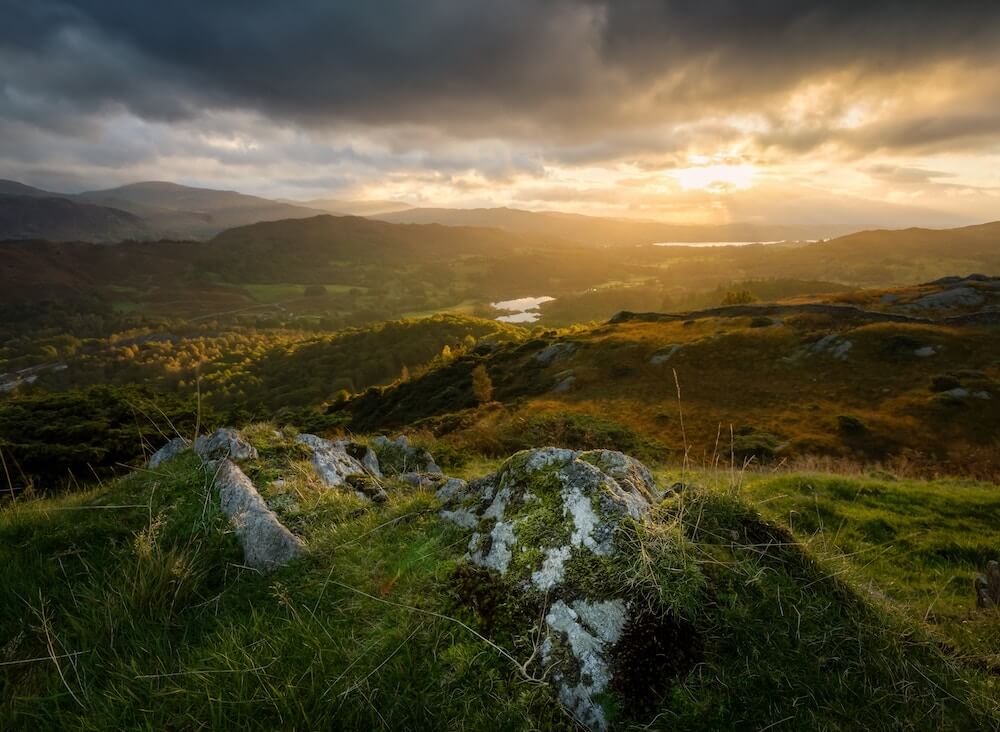 A Bridge Outside Limerick follows a young boy named Michael, an Irish Revolutionary, fighting in 1916's Ireland, and how he must escape his homeland and go into exile after his identity is discovered.

A lingering chill filled the fresh morning air as the crown of the sun broke over the mountains and hills. Spring had come, but the final fragments of 1915’s winter had not yet dissipated. A plume of breath bleached with every breath he took. He sat, crouched behind a large boulder atop a small hill overlooking the road that meandered through the pass below. Beside him sat O’Brian, a fellow classmate of Michael’s from Limerick. O’Brian shivered—not just from the cold—hugging his thick, woolen coat close to his chest.

Michael sniffed, rubbing his nose with the back of his gloved hand. He peered over the boulder to the other side of the road. There, amongst the trees and foliage, he saw figures move. Apart from a few morning birds chirping along with the brightening sky, the world was quiet.

In the distance a plume of dust rose into the sky. It was the Huns—as the Irish referred to British soldiers. Michael nudged O’Brian with a gentle shake. The boy gazed at him with sullen brown eyes; fear lingered there. Michael wondered if his own eyes gave way to the anxiety he felt. Hopefully, O’Brian couldn’t see his eyes under the shadow of his driver’s cap. He swallowed hard and handed O’Brian a rifle before reaching for his own.

It was not much longer before the two of them heard the engines of the trucks and jeeps of a caravan approaching the pass. Just beyond the hill a river cut through the valley. The road connected by a single, stone bridge large. It was large enough to hold at least half a dozen trucks at once.

The world went still. He looked at O’Brian, the boy stiff and pale like the dead. Only the strained grip on the butt of the rifle indicated any sign of life.

The engines grew louder, like a crescendoing church choir. Michael felt his heart pounding in his ears. The dawn had come and the world alight.

The caravan came to the bridge, a half dozen trucks in all. The first truck drove onto the bridge, followed soon by another. When the last truck reached the bridge, it exploded. A hail of stone, metal and shrapnel erupted in a ball of flames. The cries and wails of injured and dying men pierced through the air. Michael had never known men capable of making such sounds. It terrified him.

In an instant the IRA sprung their trap, a hailstorm of bullets rained down on the confused and disorganized soldiers. Some frantically looked for cover to hide behind; nothing but seared wreckage and clumps of rubble were found. They dove behind what they could, but they were surrounded. Desperate, they shot into the trees and into the hills at the phantoms who ambushed them, to no avail. A few soldiers attempted escape by diving into the river. It only made them easier targets for the IRA. Soon, the clear waters were riddled with streams of black and crimson.

A cloud of black smoke blotted the sky now. The chill of the morning air dispelled by the fire of burning gasoline and the horrific stench it brought with it. The wails and whimpers of men drowned out by the blasts of rifles.

Michael leapt to his feet, fumbling his rifle. O’Brian shooting blindly down below. By the time Michael had recovered his rifle, his fellow IRA were already lurking from their hiding places and approached the burning wreck. Michael watched, looking. Every Hun was either dead or dying. The dead being alleviated from their suffering courtesy of the IRA.

Michael and O’Brian crept from their spot along with the others. O’Brian did not follow him down the hill. Instead, he rushed over to the other side of the road with several others back towards Limerick. Michael stopped to watch them flee. Only he and a few other members of the IRA remained. A wave of anxiety took him as the urge to follow them took him. No, he was going to examine the carnage. He needed to see the carnage.

Michael drew closer, aiming his rifle. The foul stench of blood and burning gasoline grew ever more repugnant. Another smell wafted through the air. A putrid smell that nauseated him. Burning flesh. What a horrifying smell, shielding his nose with the lapel of his coat.

He came upon a dead Hun. The dead man’s eyes staring vacantly into the sky. His blond mustache stained with blood. A single piece of shrapnel embedded in his left breast; two bullet holes in his gut and one under the left arm.

Finally, the feeling of nausea overtook him. Michael lurched over and dry-heaved. Had there been anything in his stomach he would have dispelled it. Instead, he hacked and heaved onto the wet grass.

He looked up. The only other IRA had deserted and left, leaving him alone. He rose to his feet, wiping his mouth thinking that it was time for him to leave. He turned to go when suddenly he heard a noise that made him stop. He looked back to the wreckage, waiting to hear the sound again over the cackling of the fire. There it was, a quiet moan amongst the dead.

A young Hun emerged from beneath one of the overturned trucks, crawling across the dirt. His uniform tattered, seared fabric dangled loosely from tethered strips. He dragged his mangled leg behind him, leaving a trail of blood. Michael stared as the young Hun crawled across dirt and blood reaching a resting tire and rolled onto his back before propping himself against it. He gripped his broken leg and dragged it into place.

He choked a sigh of relief. After a few moments he spotted Michael. Upon seeing the young Irishman, the Hun swallowed hard. His right eye swollen shut and face half-painted with blood. He coughed and wheezed hard.

Michael raised his rifle and aimed. The young soldier only feet away. The Hun lifted a trembling hand, peering at Michael with a single blue eye. It was on that eye Michael focused the sight. The young soldier gurgled and whimpered, too weak to move. Michael saw the plea in the young man’s eye.

His finger was on the trigger. All he had to do now was pull it. Unable to keep it raised any longer, the young soldier’s hand dropped. Closing his eyes he waited for the inevitable, muttering silent prayers with his last breath.

Michael’s finger paused on the trigger. All he had to do now was pull it. A single moment, a single gesture and the Hun was dead; his enemy. Nothing more than a simple pull of the trigger.

Why couldn’t he do it?

He dropped his rifle, letting it sag off his shoulder. He turned around and fled back to Limerick.

Two months have passed since the ambush. For now things went quiet. Michael knew that the British would seek retribution for the attack, and soon, but they did not know when. He was told to lie low and act natural; pretend the attack never happened. But he couldn’t. He still saw the wounded Hun sitting amongst the wreckage, and the single blue eye looking back at him.

Every passing day he grew more worried. When were the British going to retaliate? He knew they would. The IRA knew they would. But when. It was the unknown that frightened him more than anything.

He strolled down Glenworth Street with O’Brian towards the Red Lion Pub. Hopefully, they could find someone to pass on any information. He looked around, noticing that the city seemed particularly empty for that time of day.

The youths entered the pub, greeted with the scent of stale beer and bread, sweat and polished wood. They took their seats at the bar. A familiar face approached and poured them each a glass of Guinness.

Michael sipped his beer, wiping the foam from the top of his lip. The little bell at the front of the pub rang, signaling that a new patron, or patrons, had entered the pub. Michael turned around expecting to see some of his fellow IRA, but astonished when it wasn’t IRA, nor Irishmen who had entered the pub. Instead it was a pack of Huns.

He pulled the bill of his driver’s cap down and covered his eyes, turning back to his beer. O’Brian shifting uncomfortably in his seat.

The British soldiers laughed, their arms wrapped around one another’s shoulders before stumbling over to the bar.

The bartender nodded and began pouring. The first Hun thanked him, holding the mug up and draining half of it in a single gulp. He spat and laughed.

“You Irish call this a drink? Perhaps you should stick to the whisky and leave the beer making to those who know how to make a proper ale.”

He laughed and turned to see Michael and O’Brian sitting at the other end of the bar. “Oi, lads,” he called to them, mug raised. “Shouldn’t you be in school?”

“Ah forget about it,” said another. “Leave the lads be. ‘Dey ain’t done no ‘arm. Bartender, anot’er if you please.”

Michael chugged the remainder of his beer and stood up. Keeping his head down, he moved towards the door with O’Brian in tow. When he got to the door, it sprung open, allowing sunlight to flood into the dimly lit pub. He stopped.

The man standing in front of him was young, wearing a freshly pressed black and tan uniform. There was a cast around his left leg with crutches to keep him propped up. A clean bandage wrapped around the right side of his head, leaving his left eye exposed; blue. A familiar blue eye.

Michael’s heart raced. The smell of betadine emanating from the bandages was palpable. Michael gulped and waited.

The young British soldier’s lip quivered, but other than that his face remained emotionless. His single blue eyes darted from O’Brian back to Michael. He said nothing. He simply pushed past the two Irish boys and joined his comrades at the bar. Michael did not wait; he rushed out of the pub and back to the street.

Paul Benkendorfer is an English teacher who has over a decade of experience working with the most vulnerable children in our society; from special needs children to counseling at-risk youth. Paul graduated from the University of Arizona with a B.A. in Creative Writing and is currently in the process of obtaining his Master's from Johns Hopkins University.