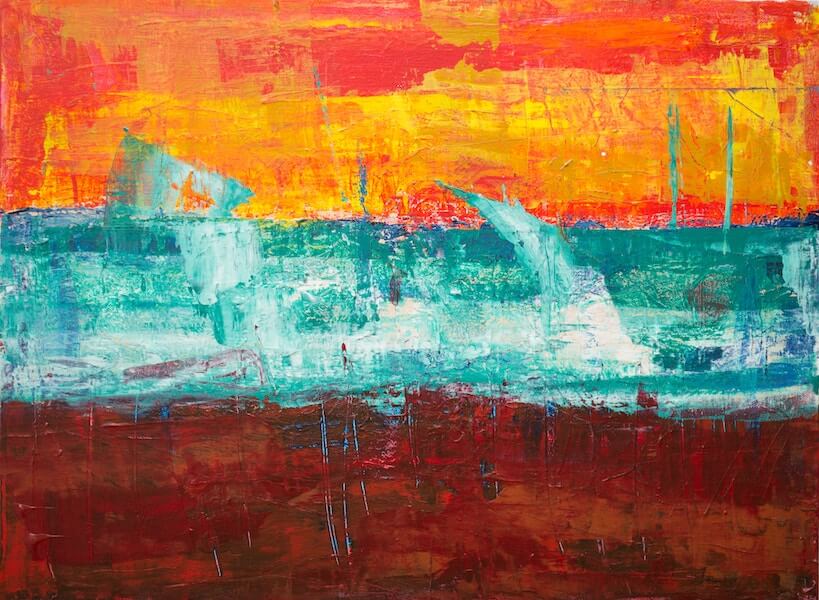 Paul placed his finger on the pulse of his home in the dark of night to feel the soothing and generous spirit that surrounded him. His children had been dead tired, his wife irritable, and he was aching to be alone so that he could wonder about the melancholy that crept around the edges of his trip the way an unwelcome guest peers into windows waiting for the moment when everyone is so enthralled that they don’t notice his arrival. When they finally do, it’s too late. The melancholy had crept around his car windows as he drove his family home from their holiday and met him when the car halted in the drive.

Paul didn’t see his garage door, but instead he saw an office in his future. He saw tomorrow. The unwelcome guest smiled. He tossed some of the bags from the trunk to his young son, Paul’s, open arms. Young Paul had gotten a terrible sunburn, and Paul grimaced when he saw the boy’s smiling little face on the verge of bubbling. Paul thought he must be a bad father to have let his son play for so long in the sun without remembering the lotion. He grimaced again, and young Paul eyed him curiously. The evening drew its arms around the family, the gold, orange and violet resting comfortably about them as they prepared to settle into their home.

Paul opened the door and the musty scent of an empty house mixed with cherry blossom, the scent that his wife favored. Again, the unwelcome guest peeked into Paul’s life and smiled the stupid smile of a happy dog or an unknowing nuisance. Crossing the threshold brought tedium along with its welcome familiarity. His wife asked for the clothes and they were all tossed in the laundry room where Paul stood in the dark doing his work because the light in the room was too harsh for the beautiful sensations that flooded him. Memories of a welcome rest far from home with an equally relieved wife and lovely and happy children stood with him in the dark. The light, once flicked, would strangle those memories with the unsettling buzz of flickering ugliness.

The children fought as overly tired children do, and Paul’s wife needed everything just so. Paul was tired too, but he was intent on shooing the unwelcome guest wherever he could find it. In his mind, there was no reason there should be any change between the life of a holiday and the life within his home. He and his wife had cleaned together before they had gone away so they would come home to cleanliness and care. It was their ritual because they knew unhappiness lingered in unfinished details.

Paul pulled the plates from the table as the meal finished, smiling at the blooming flowers that sat on the window sill. They had bloomed since he had seen them last, and vibrant life that inhabited his sill along with the warm water that flowed between his hands washed away the unwelcome guest. The light of the sun had gone, and the orange glow of nighttime suburbia had replaced it, creeping into his yard to cast long shadows on his belongings. He frowned unknowingly, and his wife recognized it though she couldn’t see his face.

It seemed she was also staving off the unwelcome guest because she rubbed his back and whispered thank you in his ear before she corralled the children up to bed. They were all very tired and the children fell asleep quickly and slept easily. Paul believed they were also working against the unwelcome guest when he went to check on them. Their sleep was complete and impenetrable. Their faces glowed with serenity. His wife sat in bed with the table lamp on, reading. Her lips moved unconsciously, and he knew she was pressing a thought from her mind by concentrating intently on her reading.

Paul undressed, sighed, and lay back on the bed near his wife. She scratched his head, a sign of affection as well as a queue that she should be left alone. So, he went down to the living room into the dark with a bottle of beer and a fervent desire to fill his home with his past holiday. When two beers were done, he relented and turned on the television. When three were done, he went up to check the boys. Their peace showed him the unwitting contrast between the Paul who had walked down the stairs, and the man who had walked back up. He stood in the doorway and recognized his holiday had been effortless, easy, the way the boys looked now. He could not shoo his future any more than he could regain his past.

Paul was distraught and wondered if this was the life he was meant for, or if he hadn’t taken some wrong turn that lead him into a home where unwelcome guests could come as they please. He shook the thought from his head the way someone might shake the cold from their jackets when they come inside. That was when he touched the home, felt the warmth and safety of so much effort and so many memories. He couldn’t escape the envious creatures that surrounded him any more than he could escape the love he and his family felt for each other.

Paul sat on the wood floor in the hall between the door to his children’s room and his own. He remembered himself as a child, free from worry and complete in the knowing that his parents could save him from all distress. He hoped his boys felt the same about him. He smiled softly. He wanted to be close to his wife, to hold her and whisper his love into her ear as she slept. Instead, he sat in the hall and reflected on her strength, her beauty, and her courage, and he was filled with profound relief. It was not the relief of his childhood or the relief of becoming a man, free to make decisions based on his whims. It was the relief of having a companion who he could rely on, whom he loved. It was the relief of so many monotonous moments made interesting because he shared them with his lover.

Paul sighed heavily, and the melancholy sat down beside him and patted his hand in complete understanding. Paul was complete and yet there was still so much to do, so many to look after, so much love and desire in him. His mind whirled with possibility, and he sat in the whirl with his head against the wall facing skyward until he heard his wife shuffling.

Kit McCoy's stage play, The Velvet Rut, has been performed at Two Beards Theatre Company. His short story, The Rain, has been published in the Penmen Review. He currently works as a copywriter. Kit makes his home in Sarasota, FL where he enjoys practical as well as impractical conversations with friends over cold-brewed coffee on the beach, and being on the stage performing music or comedic improv.