They stand in the archway at the back of the chapel, watching the prisms of light as they pass through the stained glass and dance on the old wooden floors. It had taken some effort, but Jeannie had picked the least flashy church she could find. She wasn’t aiming for somber, but she needed dignified. She places her hand on her father’s arm, feeling the cool starchiness of his dress whites as he stands ramrod straight, his seventy-five years not yet bowing his body.

“Are you sure you want me in uniform?” he’d asked her the week before. “It’ll make everyone remember —"

“You can say his name, Daddy,” Jeannie responded. “It’ll make everyone remember Tim. I want them to remember him,” she said. Even her white silk tailored suit could have passed for standard issue, but at forty and the second time around, she couldn’t fathom a bridal gown.

She’d met Tim when they were both fresh out of college, and soon after he enlisted. She’d fallen hard. Oedipal or not, the attraction to a military man had been lost on no one. Her father had been circumspect.

“Are you sure you want that kind of life for your own children someday?” he had asked, not long after she’d started going with Tim. She knew her father meant the relocations — they had moved every couple of years from one base to another, changing schools each time. Did she want her children to be military brats as well?

But the truth was it’d been a wonderful childhood. Her mother had been the rock of the family, helping the kids to adapt to each new situation and creating a core of resilience in Jeannie and her siblings. And the postings themselves had been exciting — Virginia and California, and the Philippines and Germany as well. Jeannie had grown up with a profound sense of the world as an open place of adventure, filled with people to meet and cultures to discover.

The low tones of the organ that had been the background to the gathering of the guests now gives way to a spiraling crescendo, and Jeannie takes a few tentative steps down the aisle with her father as the guests rise to their feet. Out of vanity, she has ditched her glasses, and from this distance the man waiting for her at the end of the flower-strewn runner could be Tim or Mike, or anyone else. She glances at the pews on the bride’s side and sees almost the exact assemblage that had attended her wedding to Tim fifteen years before — old Aunt Bernie has died and been replaced by little Frankie Junior. There are a few other substitutions — one famous falling-out she had with a close friend still rattles her. She doesn’t look to the groom’s side of the room, where Mike’s family sits in lieu of Tim’s, maintaining the illusion for a few more minutes that she is still a young woman of twenty-five who has not yet known grief.

After the training accident, people asked Jeannie if she had been afraid when Tim was deployed to Iraq. She had answered honestly, “No.” Should she have been? She had no time to be afraid. She was a mother with two small children on an army base. It was a community that she understood, and she felt supported, almost protected, by the other women and the structure of the lifestyle. And Jeannie’s father had always come home.

A few more steps down the aisle and she sees their boys —so big now! — in proper suits and standing as still as their ten-and twelve-year-old bodies will allow. Occasionally they shove one another, as they turn to watch Jeannie and their grandfather. They are both sandy-haired and freckled like Tim, but they have no memory of him at all. And yet, while they yearn for the normalcy they believe Mike will bring to their family and wait impatiently for the adoption to be finalized so he will be their father, they have decided to keep Tim’s name. Jeannie is proud of their decision, even as she makes a different choice.

Finally, they are half-way down toward the altar and Mike’s face comes clearly into focus. He is wearing the same thoughtful expression as the day Jeannie met him five years before, at the reflecting pools at Ground Zero, but this time it is softened by joy and not tinged with pain. She had gotten into the habit of taking her lunch break there. What others might find maudlin, Jeannie found comforting — a place where she could join in the longing for lives cut short in an instant.

She noticed Mike right away, as he perused the names of the fallen, tenderly touching so many of the engravings. Jeannie would never have approached him, but the number of people he appeared to be looking for made her believe he must be a firefighter paying tribute to the first responders lost that incomprehensibly beautiful morning.

“Are you still serving?” Jeannie asked, standing on Mike’s side, not wanting to rattle him, but drawn to the trauma in his eyes. Mike looked up at her, momentarily confused, before answering. “No,” he said, “I’m not who you think.”

“Then tell me who you are,” Jeannie said, her own boldness, after the years of cocooned misery, surprising her, and she laughed for a second. The sound was so jarring that Jeannie looked down at her feet, ashamed. But Mike did not take his eyes from her.

“I was a junior broker at Cantor Fitzgerald on 9/11.” Jeannie knew the numbers. The firm had lost 658 people. Unfathomable.

“Thank God you’re alive,” she said, with no hesitation and forgetting, for a moment, the terrible survivor’s guilt she knew so well.

“Can you tell me what happened, why you are here?” Jeannie could not have articulated at that moment why she asked, or why it mattered, but for the first time since Tim died, she felt her soul’s need to connect to another’s.

“If I can buy you a cup of coffee,” Mike said. They walked down the block and settled into a booth in a diner.

“So, I was living in Astoria, Queens, at the time, and I had this orange Tabby cat. He was old; I called him Tabby. Anyway, he had broken his leg and he was in a cast. When I got ready to leave for work on September 11, at around 7:30 a.m., I put Tabby into his metal cage. It was safer for him that way,” Mike said.

“Allergies — could never have a dog. Tabby and I had been together for years. Anyway, he starts smashing his broken leg against the side of the cage — absolutely going haywire. I was afraid he was really going to hurt himself. But I was already late for work, so I’m cursing at the cat — I really don’t do that, but I was. He was freaking out so badly I had no choice but to take him out of the cage.” Mike motioned to the waitress and stopped telling the story while she refilled their cups.

“So, what happened?” Jeannie asked. For a second she wondered what she was doing having coffee with this total stranger who might be trying to con her. But who could make up a story like this?

“So, I sat down on the couch with Tabby on my lap. His fur was standing on end and his whole body was taut, and he was mewing and yelping like a wild animal. I pet him until he calmed down, but it took almost an hour. And somewhere with all that stroking and soothing, I fell asleep on the couch. When I woke up at 10:00 a.m., my phone was ringing off the hook.”

Jeannie keeps moving forward down the aisle, unable to pick up the pace but steady. As she nears the altar she takes another look at her boys, and sees Tim’s mother Louise, smiling as the tears run down her face. Jeannie had told her many times that if it were too painful for her to come, she understood. But there Louise is, happy and sad in a lovely light blue hat.

And then they are there. Jeannie’s father puts his hand over hers where it rests on his arm. “Who gives this woman to be married?” the priest asks.

“Her mother and I do, Father,” her father answers. He places his hand on top of Jeannie’s where it rests on his arm. Leaning in close he speaks softly to her. “Choose to live, my daughter.” He takes her hand and places it gently on Mike’s waiting arm. 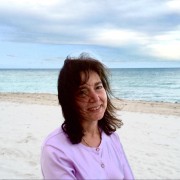 Reyna Marder Gentin practiced as a criminal defense attorney for over two decades before taking up writing. She has studied memoir and fiction at the Writing Institute at Sarah Lawrence College. Her debut novel, Unreasonable Doubts, was a finalist for the Women's Fiction Writers Association Star Award for Outstanding Debut and can be found at bit.ly/UnreasonableDoubts. To read Reyna's personal essays and short stories, visit reynamardergentin.com.