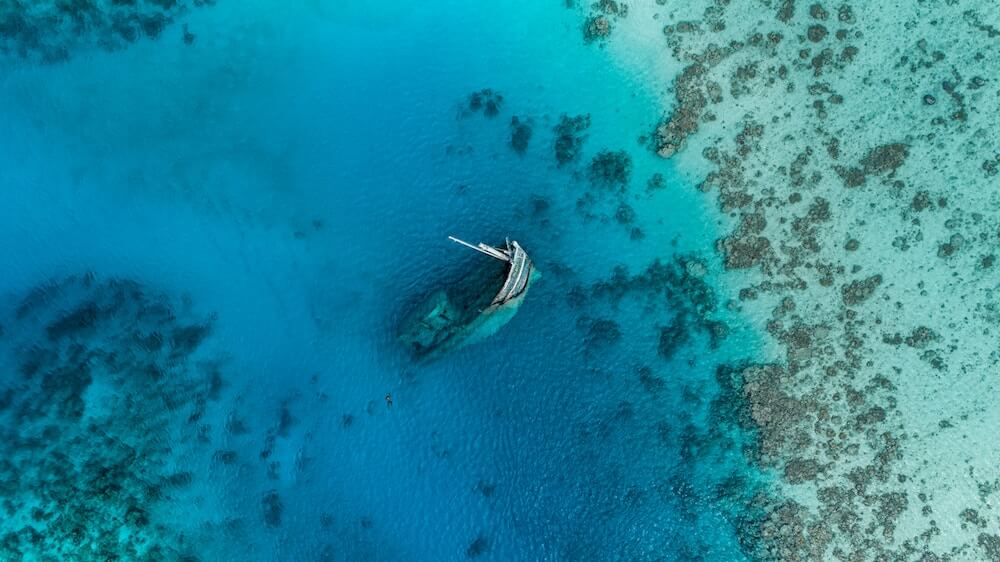 After he awoke, he did not remember his name for many days. By then, the mess of line that had tangled around his ankle had peeled away. He’d also found the transom of his boat, The Aloha, broken over a sandbar and stretched and twisted and torn like chewing gum. Now he remembered her, a lovely little schooner with a cream-colored deck over a small one-man cabin. The atoll, too, was small. It was so small one could see its east coast from its westernmost point. However, even on a clear day, no other coastline could be seen. Life on this atoll was almost easy. At low tide, groupers and reef butterflies drifted lazily in tiny stone holes to make an easy supper. When the tide was high, hundreds of aquatic insects would scamper onto the rocks and be snatched by birds who’d never learned to fear a human hand. If it rained, he slept beneath that chunk of the washed-up transom, and when it was hot he slept on its back. There, its italicized letters of navy paint were cool and soft.

Life was, however, very lonely. Fish, despite having lips and tongues, still lack the organs necessary to form speech– and the atoll’s tiny cave, despite being capable of echoing, was never any good at listening. When this made him sad, he drank, but because only one case of liquor had washed ashore with him, he exhausted the release in a matter of days. After a while, he found a book that had washed ashore too, but the ink had run off the pages (and The Complete Daniel Defoe felt impossibly ironic, anyways). Other artifacts from The Aloha washed up as well: a knife which could be used to clean fish, and a jib sail which served as a hammock. Line, of course, was always useful, as was electrical tape, shroud cable and wax thread. And then there were the useless things: three cracked glasses, a wet bag of Wonder Bread, and a camera case. Their only effect was to remind him of home, and they made him miss his wife. He couldn't think of her name yet either, but he could see her reddish hair and crowded smile in the cellophane wrappers that had held candy canes in a galley drawer. After seeing her one evening in the red-white candy residue, he pricked himself with that precious knife and wrote in smudged letters across the pages. His port of hail was written first, then the ship’s. Finally, his signature was added. The name had returned to him in an epiphany, jumping from the dredging cloud in his memory as a wild hurricane does, and tearing across his body to stand his hairs on end. It looked strange on the page, written in red and in his fingerprints.

The idea that someone might read his words made him very happy. Having rolled the letter tightly, it could just barely be squeezed throughout the narrow blue mouth of an emptied liquor bottle. He found an unbroken cork, plugged his message, and threw it into a retreating tide. Groupers and reef butterflies pecked at it curiously, and carefree birds circled it closely. He grabbed one of these groupers and cut off its head. He ate the body while it was twitching.

Many months later, in a resort town outside of Kingston, Euh-jun slipped out of his father's house to settle his head. A bad turn in pork futures had woken him (thanks to an alarm on his phone), and although the dive had stabilized, he felt fully awake. Walking over the white Caribbean sand he felt something foreign under his bare feet. Though it was covered in algae, he immediately recognized the beauty of a clear blue bottle capturing the moonlight which curled around its chips and curves trying to escape. Euh-jun lifted it like a baby, as though its fragile neck just might snap, and admired the tight roll of brittle parchment inside. The strange characters running around it reminded him of university English classes, but he’d failed that subject, and the glower of the letters quieted his curiosity. In silence, he rubbed away the algae and the sand with the ball of his uncalloused palm. He placed the treasure in his bag. Surly, his girlfriend in Seoul would think this a wonderful souvenir from his trip. He smiled, just picturing the conversation piece pinned up on her apartment’s wall.

E. Merrill Brouder was born in New York and raised in Maine, where he fell in love with the region's unique history of folklore, comedy, and poetry, and later the writings of the Symbolists and Modernists from across the United States and Europe. His work has been featured in The Write Launch, Pittsburgh Poetry Houses, and other regional publications.