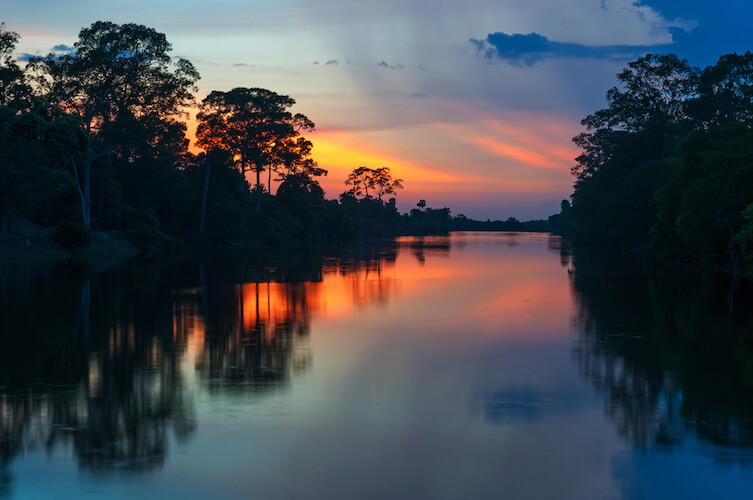 I keep using jungle as a kind of shorthand, but it is more correct to speak of the Amazon as tropical rainforest. Jungle is not a proper biogeographic type: it only means a tangly, impassible area of tropical second growth. Natural clearings in the rainforest are typically small and patchy; fast-growing pioneer species propagate exhuberantly, twisting and tangling as they speed to capture as much sunlight as possible before slower growing trees overtop and close the canopy above them. It’s only when a substantial area of primary forest has been cleared all at once and the hodge-podge regrowth of pioneers is not tamed by a closing canopy, that a second growth forest becomes a jungle. Natural forces—severe hurricane, landslide, wildfire—may occasionally produce such extensive openings, but they are more usually created by humans. Although we think of jungle as the ‘wildest’ form of nature, its presence generally signals: “Kilroy was here.”
At the end of spring 1977, Josea had needed to temporarily leave her research site in Peru’s northern Amazonian province of Loreto and return to Lima to get treatment for a parasite infection. She had been studying how changes in the livelihood of the Urarina people over seventy-five years—from rubber tapping, to logging mahogony and rosewood, to growing plantains and yucca root for the Iquitos market—were reflected by changes in their living arrangements. Rubber tappers at the turn of the 20th century, they had lived in more or less nuclear households, each tending its forest network. Logging two-hundred-foot trees deep in the rainforest and hauling them down to the river called for gangs of men, typically brothers-in-law who settled together with their sister-wives. When the timber was exhausted, the uneven distribution of land suitable for horticulture and not too distant for homesteading spread the Urarina out along the rivers again, extended households coming together for land clearing and harvesting as needed.
Josea had begun her Peruvian fieldwork some nine months before the start of my planned research in India, but when I failed to get funded on my first go-round, we decided I’d join her in Peru until the grant application cycles reopenend the following autumn. From Iquitos, we travelled to the Chambira by lancha, a kind of riverboat jitney. In the 1970s, these fluvial stage coaches were the only public transport on the Amazon: today you can book a cruise up a tributary right to the landing of some Indian village. After all this time, my memories of our two or three days aboard seem wan. I’ve only ghostly impressions of a deck strung with hammocks beneath a lattice of palm fronds and of dinners of rice and stew eaten from astride wooden benches or while leaning against the lancha’s rails.
During the trip, a European traveller told us of his experiences with the hallucinogen ayahuasca, an infusion of the bark of the Banisteriopsis caapi vine. (William Burroughs and Alan Ginsberg’s The Yage Letters describes Burroughs 1950s’ experiments with ayahuasca in the Colombian Amazon.) The only thing it could be compared to, the young man said, was going to the cinema. Josea related the experience of an Amazonian Indian brought to Lima by a Peruvian archaeologist. Asked to describe his first experience of seeing a movie, he said: “It’s a lot like taking ayahuasca.”

My memories of the Manus family and their houseboat are better but still spotty. Ron and Phyllis, their four children and two anthropologists filled the boat beyond overflowing. There were so many of us trying to sleep below deck that I opted to sleep out on the bow. This was fine as long as we were running up the middle of the river, but one morning, when we were anchored by the shore, a cloud of gnats descended—hundreds if not thousands of them—and bit the bejeezus out of me. I turned red and puffed up like a wetted sponge. Taking two steps across the deck, I plunged into the mud and thrashed about there until the swelling and irritation were somewhat relieved. Those who’ve never been there may fear the jungle for snakes and jaguars, but it’s the bugs that will do you in.
I vividly recollect our first night on the river, when Rich’s teenage son Jerry and I were left in charge as everyone else went to sleep. Our task was to spotlight the river for obstructions as we cruised upstream—particularly half-submerged, waterlogged but still floating trees—and steer around them. Instead, Jerry chose to hunt caiman, ‘alligators,’ the big spotlight perfect for illuminating the red-reflecting layer behind their eyes as they floated nostril-high beside the riverbanks. Yet, we never retrieved any kills. Examining the shell box in the morning, I learned we’d been firing unjacketed hollow points that wouldn’t have left the hard-skulled reptiles with so much as a noticeable headache.
By dawnlight we also discovered how far, or rather, how not-far we had come. We’d spent the night zigging and zagging from one bank to the other, making hardly any upstream progress. Either Jerry’s father didn’t notice or pretended not to.

Ron Manus was a short, wirey type, partial to cowboy boots, which I also favored in those days, but for jungle footwear? A Wycliffe Bible Translator (they also go by SIL, for Summer Institute of Linguistics), Manus was one of the missionary-linguists who create writing systems for indigenous languages and translate the Gospel into them. Ron was working on a translation of Timothy—both books—which occupy approximately six pages in your Gideons’ bible. I joked that this was thin gruel for a decade-and-a-half’s work, but I see from a 2007 Wycliffe newsletter that the completed New Testament was delivered to the Urarina of the Chambira on May of that year, a labor of nearly half a century in which many had participated.
When Josea had spoken to Manus from Lima, their plan was to collect Ron’s motorboat at the fondo, power back down the Chambira, and then west and up the smaller Tigrillo to where she was conducting fieldwork. But this was the Amazon dry season and as we quickly discovered, the water levels in the Tigrillo were too low for anything larger than a canoe, or, maybe a pequi-pequi (from the sound of its two-stroke engine), like the little boat Josea had left behind at her study site. The only way to retrieve her boat would be to walk across the watershed; not an option for Josea with her knee acting up. She had crunched it against the piping underneath her bathroom sink while angry at me one day back in New York, nor was I allowed to forget this.
New plan. Guided by Rio Chambira folk, it would be me crossing the watershed some miles above the Manus’s place—after all, I ‘owed’ her—and, if it was running, me driving the pequi-pequi down the Tigrillo, then back up the Chambira to collect Josea. I worked up a complicated flow chart—if the motor ran … if didn’t but could be repaired on the Tigrillo … if it had to be put on a lancha and shipped to Iquitos for repairs…. In the best of cases, it shouldn’t have taken above a week; in the worst, maybe two.
Men make plans, they say, while the gods laugh themselves silly. Twelve days after staggering across the watershed from the Chambira to the Tigrillo, I staggered back out of the swamp even farther up the Chambira than whence I had departed, with no means of getting downstream to the Manus’s place: the Urarina were all headed in the opposite direction. Just then, a Peruvian estafador ‘hustler’ came paddling downstream in an aluminum Arkansas Traveler canoe. If he could just arrange the transport—“Solo falta la mobilidad. Falta la mobilidad”—he believed he could strike it rich by extracting the Chambira’s remaining rosewood and mahogany. Glad for the extra back and shoulders to help propel him downstream, we paddled long into the full moon-lit night, stopping only to eat and rest for an hour or two, reaching the Manus’s fonda just after dawn.

And there you have it—I hadn’t had a clue about what I was doing. While I’d spent three years readying for fieldwork in India, I’d had less than a week to prepare to trek across an Amazon watershed, meet a tribe that had preserved itself from oppression for four hundred years by behaving passive-aggressively to outsiders and learn to speak their language, or even a passable Spanish. (I grew up with the street sounds of San Juan and Santo Domingo in my ears. You should have heard me trying to explain subway trains, in a Caribbean accent, to someone who had never been outside the Amazon Basin.) When it turned out that the Urarina had no use for any of the trade items I’d brought with me—fish hooks, batteries, penicillin, shotgun shells—I could barely feed myself and, when the pequi-pequi wouldn’t start and no one seemed to care if I ever got back to the Chambira, I had no idea of how to find my way home.
Lenny Bruce had a joke about an aged Jewish candy store owner who released a genie from a musty old bottle. To every question about his abilities—“Can you run a candy store?” “Can you send me to Miami?” and finally, when a customer came in: “Where’s Sol and, can you make me a malted?” (“Poof! You’re a malted.”)—the genie had a single answer. “I’m a genie. I can do anything.” “I’m an anthropologist,” I thought. “I can do anything.” I’m not actually a moron, but I appear to have behaved like one on this occasion.

Nathaniel Wander is an anthropologist and public health researcher retired from the University of Edinburgh in 2011. “An Anthropologist ‘Storms Heaven’” reflects on his earliest field ‘immersion’ in tropical America forty years earlier. As he concluded: “I’m not actually a moron, but I appear to have behaved like one on this occasion.” “An Anthropologist ‘Storms Heaven’” is extracted from a memoir-in-progress with the working title “You Are Here-X: Tales from the Evolution of an Anthropologist.” Two chapters—“Me and Margaret Mead against the World” and “Cars I Have Known … and Wrecked” have recently been published in Ponder Review and The Raven’s Perch respectively. A third, “Cowboys and Indians,” about his early days researching in West Bengal, is scheduled for July publication in Jaggery, an online magazine for people of the South Asian diaspora.