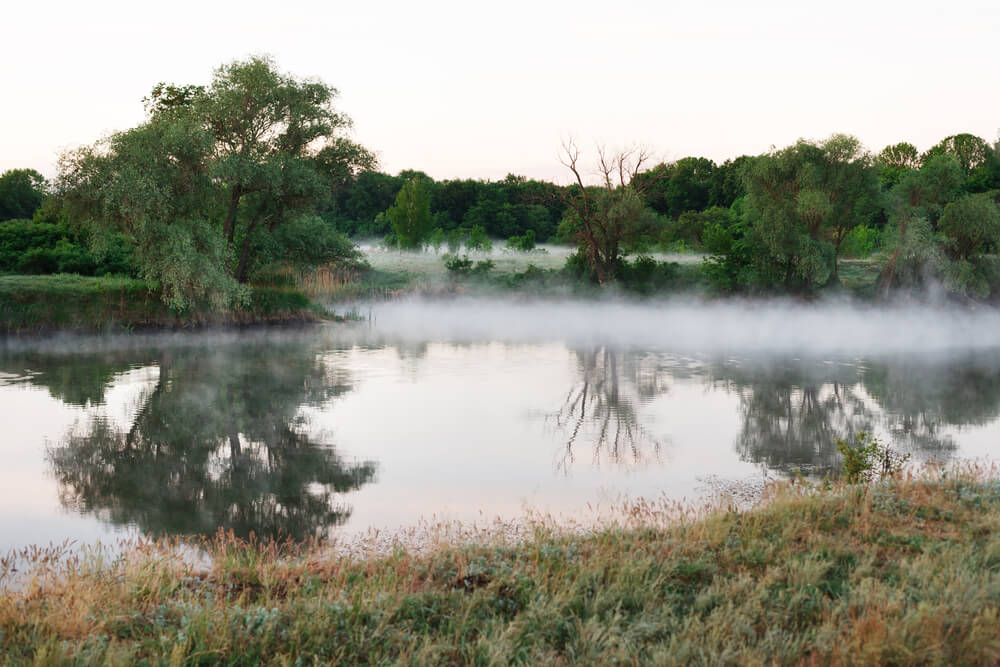 Hannah had been negative on building the porch because she knew Josh. “Everyone has a story,” he would say, endlessly fascinated by the sheer existence of others. She knew that the porch, for Josh, would be the place he’d draw people in – anyone and everyone, with a drink or a bowl of popcorn, and an open smile. It was part of what Hannah loved about him – he was her polar opposite.
But it was quiet this early Sunday morning, as Hannah sat in her rocking chair, gently pushing herself back and forth with her bare foot and her newly painted toenails on the flagstone floor. The weather had turned cool, and the landscapers couldn’t bag up the leaves as fast as they were falling – cascades of red and yellow and orange drifting like confetti from the tall trees that surrounded the house.
At first, Hannah thought it was just more trash on the surface of the pond in the center of the Green across the street, the usual debris that her neighbor Marci (self-appointed community watchdog, retired with too much time on her hands) was always contacting the city council about. The water was shallow – barely three feet deep at its center, and there was no circulation. Once an object came to rest there -- a basketball, a shoe, a tire -- it usually decayed there indefinitely. On its best days, the pond was pretty, a pleasing old-fashioned country aesthetic. On its worst, during the hot summer months, it was a breeding ground for mosquitoes and an eyesore, stagnant, sour smelling, and suffocated by duckweed.
Leaning forward, Hannah peered intently over her steaming mug of apple tea, trying to force the black, sparkling floating shape to resolve into something recognizable. The Green was still decorated for Halloween, which had come and gone two weeks earlier. Three or four families in the neighborhood were de facto in charge of community get-togethers, which all centered around the Green. At Christmas, there was a tasteful tree, and around Memorial Day, there was a picnic with pony rides, a jumping castle, an egg toss and a tug of war. There was a Halloween party with a costume parade – with the Green decked out in mildly alarming white-sheeted ghosts, fake cobwebs on the low-bushes, paper vampires and bats and witches hanging from the trees.
“Ouch!” she yelped, stepping on fallen acorns as she headed down her driveway and crossed the street, cursing herself for not putting on slippers. She shuffled down the small grassy embankment toward the pond, still carefully holding the mug of tea. At this hour, the street was silent; only Hannah and the squirrels scampered about. She had forgotten her glasses, and everything looked somewhat hazy as she parted the weeds at the side of the pond and stared at the black thing. She could now tell that it was a sequined material, and it was larger than she had thought. Hannah turned her head from side to side, until the shape of a dress, if a rather skimpy one, coalesced. The fabric was floating close to the edge of the pond, and the water below it looked no more than a foot or two deep.

There would be no wake, no open casket. Just the funeral, in the middle of the day on the Tuesday of that week, some friends and neighbors there to console Kat’s parents and grandparents. And the police, outside, watching every entrance, looking for clues.
The autopsy had revealed that the cause of death was not drowning, but strangulation. The gash on her head was a red herring, but Kat’s neck was marked by telltale bruising, and the blood vessels in her sclera had burst, a common side-effect of severe pressure applied to the windpipe. She had been placed into the pond after she was dead, washing clean any fingerprints or other DNA evidence that might have otherwise adhered to her body. The detectives scoured the Green for several days, dredging the pond, looking for clues on the ground. But the leaves were so numerous that they carpeted over everything, and no eyewitnesses had come forward.
That night, after the funeral, Hannah burned the notes of her interview with Kat at the clinic.

Reyna Marder Gentin practiced as a criminal defense attorney for over two decades before taking up writing. She has studied memoir and fiction at the Writing Institute at Sarah Lawrence College. Her debut novel, Unreasonable Doubts, was a finalist for the Women's Fiction Writers Association Star Award for Outstanding Debut and can be found at bit.ly/UnreasonableDoubts. To read Reyna's personal essays and short stories, visit reynamardergentin.com.