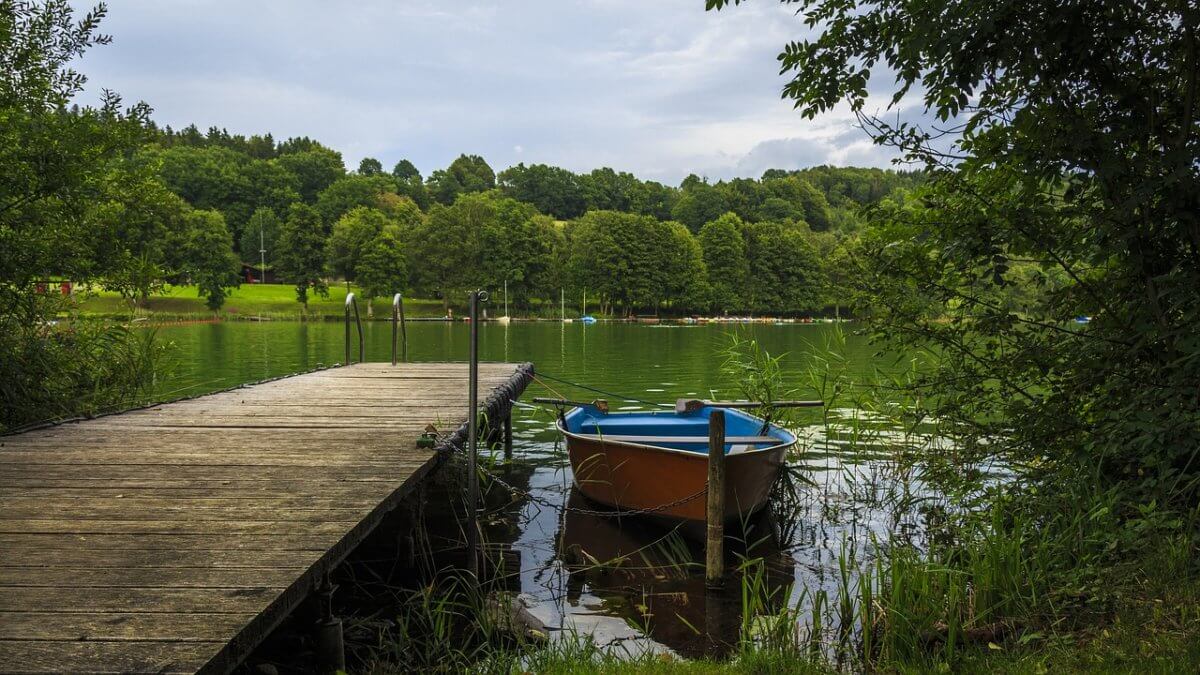 Lindsey was seventeen in the summer of ’96. That was the summer old Mr. Henkels over at the bait shop had a heart attack and left Kingsport with a population of 1,499. Kingsport High had a graduating class of forty-seven that June, although principal Huckabee had been hoping for an even fifty. Kingsport was a one traffic light kind of town. It was the kind of town that noticed the absence of its 1,500 person; therefore, she knew it was the kind of town that would notice the addition, as well.
To be born in Kingsport was to be born with a keen eye for noticing. Townsfolk noticed whose husband spent the most time at the pub, which boys on the lacrosse team were being scouted, and which house on Academy Street had the most domestic disturbances show up on the police blotter. Lindsey had a knack for noticing, herself, but there were some things she would have preferred not to pick up on.
Like how after she told him, Eddie let his face crumble for a few moments before he commanded every muscle to muster a halfway decent facial expression.
Or how she noticed the wrinkles on her mother’s face dug their trenches even deeper when her eyes closed to process the twist of fate.
When she pulled into Ryan’s driveway, he was packing up his old dodge for the final time. The first thing she noticed was his grin, already spreading halfway to the west coast. She could hear his mom yelling to him from the porch.
“Honey, make sure you leave room for that fridge, we still gotta pick it up from Aunt Colleen’s house.” She was flicking a pen against a checklist when she caught sight of Lindsey.
“Well if it ain’t my favorite girl!” in her one-dollar Old Navy flip-flops and Kingsport High Lacrosse Mom t-shirt, she ran through the yard to give Lindsey a hug. “Look at my boy. You kids are gonna drive me crazy, all up and leaving like this.” Lindsey offered her the best smile she had on duty.
“I was thinkin’ we could maybe strap you up on top along for the ride,” Ryan shouted over to her.
“You know me, I like sittin’ in the truck bed.”
“I think they frown upon that outside of Kingsport.” Ryan winked. She couldn’t help but to notice he had his Sunday jeans on even though it was Friday, and that his work boots and fishing pole were sitting by the screen door, far away from the things he was bringing with him. He hadn’t even hit the road yet and she could see he was already turning into the man he was meant to become.
“Get a load of this, Linds, you’d love it. My roommate said there’s a bonfire pit in the courtyard. I told him he doesn’t know a fire ‘til he’s been to Perch Road after homecoming.” He was shaking his head but that grin hadn’t fled even for a second. “But still, pretty cool, right?”
“You’ll show ‘em how it’s done.” With every box loaded into the back came another detail of all that was waiting ahead for him. Coach already called. He could pick up his gear tomorrow. A teammate’s girlfriend would sell him her old chemistry textbook for cheap. Word was a bar down there didn’t even ID.
“And you!” he exclaimed. “Jesus, look at me runnin’ my mouth, you’re headin’ out soon, too, right?”
There it was. The truth festering inside that needed to be revealed. Her tongue felt dry and it was as if her brain had fallen asleep the way feet sometimes do because she couldn’t remember how to utter a single word. He looked so goddamned excited.
“I - ”
“You’re gonna kick the world’s ass. You know that, right? Lindsey Lafave, you’re the smartest girl I know.”
She then lied to Ryan for the first time in her whole seventeen years of being alive with him. She didn’t lie when she ran over his cat with the four-wheeler, even though she could’ve blamed it on Emma Atwood. She didn’t lie when she knocked the tackle box into the lake and easily could’ve said the neighborhood bully Tommy Peirce took it. She didn’t lie when he asked her if the rumors about Eddie Springer and her were true, even though saying yes made her a certain kind of girl. For Kingsport kids, friendship was a pact that held up through the ugly, kept intact by blurting out ugly truths.
But she wanted to be the way he saw her, if only for a few moments in the imagination.
“My shift starts soon.”
“Come here, kid.” He scooped her up in a signature Ryan bear hug. Her eyes were hot and sticky with tears fighting to escape.
“Don’t forget me out there.”
“Right back at ya.”
As she drove out of the driveway she pictured his mom calling him up to do the deed for her; she’d slip it in with news of a second-cousin’s grandma’s death, or maybe after the announcement of a neighbor’s divorce, or some other type of disappointing turn of events that people love to gossip about because it isn’t happening in their family.

The McGregor’s at table nine needed extra gravy for their fries. The second, maybe even third-date couple at the two-top by the window had their entrées but still no steak knives. Ms. Riley was waiting on her pinot noir. The six-top needed coloring mats within the next three minutes or else a tantrum was sure to erupt in the middle of the dining room. Lindsey had a pitcher of beer in her hand while she gazed desperately at her section; not remembering whom it had been for.
“Linds, I just sat you at table eight.” The freckled face of a hostess who couldn’t have been two days past the legal working age looked up at her.
“Annabelle, tell Ashley she’s gotta take it.”
“She’s on smoke break.”
“Well, I better be getting a goddamned break next.” Lindsey rolled her eyes. Even that slight motion stirred an ache in her body, feeling the heavy weight of each over- worked muscle. Finally she caught a glimpse of the lacrosse dads, holding empty beer glasses in the air as if they were toasting to the fact that this pretty girl would be bound to Kingsport for the rest of her years, ensuring no barfly would ever go thirsty for too long.
“Well if it ain’t little miss Lindsey.” Mr. Lambert filled his glass the instant she set the pitcher down on the table. “Can ya believe m’boy’s gone?” His face was flushed and his eyes were glazed over to such a degree that Lindsey strongly suspected Mr. Lambert had been sitting on a barstool instead of his front porch when Ryan left.
“Might as well bring us another one of these while you’re at it.” She retreated to the bar where Pearl was pouring and set the pitcher down with a sigh of exhaustion.
“What’s botherin’ you, Lovebug?” Pearl’s warm voice had the power to soften the edges of the stress that gathered in angular lumps inside Lindsey’s stomach. “Do you need to be out of here early tonight?”
“Actually, I’ll close up with you if you don’t mind?” Pearl eyed her suspiciously. None of the girls ever wanted to close up. They passed that responsibility back and forth like a hot potato.
“Sure thing.” She handed the full pitcher back to Lindsey. “Oh, and tell the bastard next to Lambert that his wife’s called up here twice now lookin’ for him.”

“Well, the kitchen’s closed and the kegs are dry.” Pearl sunk into the booth across from Lindsey. The country music station favored by the local patrons had been promptly shut off and replaced by Pearl’s favorite Stones album she always saved for closing time. Three heaping baskets of silverware waiting patiently to be polished and rolled were the last obstacles in the way of clocking out. Lindsey’s fingers lingered on each set, searching for a rhythm as her thoughts ran rampant through her mind.
“Lovebug, I don’t think you’ve stayed ‘til close since before you started runnin’ around with Eddie, much less asked to stick around.” Pearl drummed her acrylic black nails on Lindsey’s forearm. “Everything alright?”
There was the question beckoning Lindsey to open her floodgates. She knew Pearl’s kind molasses eyes weren’t going to waver from her until she started talking.
But in place of words came ugly, snotty sobs that brought equal parts surprise and relief. Her lower lip quivered, jumbling any attempt she made at forming a coherent syllable. Pearl squished into Lindsey’s side of the booth, letting Lindsey burrow her face into the crook of her neck.
“I’ve got all night, Lovebug,” she cooed, “all night.”

Natalli Amato was born and raised in Sackets Harbor, New York, where she grew up on the shores of Lake Ontario chasing sunsets and the Milky Way. As she has navigated the process of growing up she has waitressed, interned with the New York State Attorney General, and studied in London, England. She continues to pursue a degree in Sociology and Public Relations. Her writing has appeared in Perception Magazine (of Syracuse University), Prolific Press's Three Line Poetry.