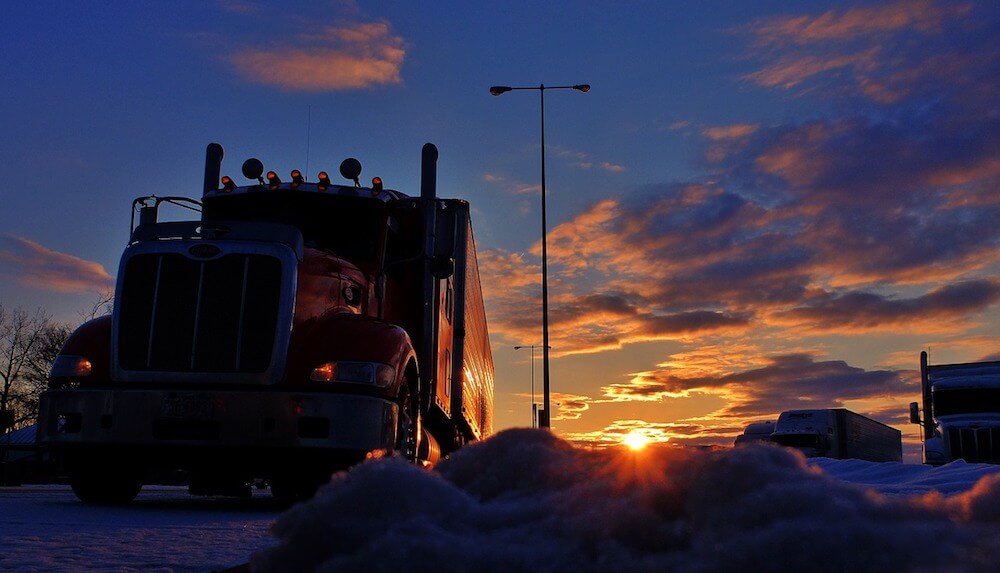 Once, when he was thirteen, Nathan asked his dad if he could tag along on one of his routes. Reluctantly, his dad said yes, on one condition: “Don’t bitch when it gets boring.”
It got boring, but Nathan didn’t bitch. He talked to his dad about school until the conversation ran dry. He listened to the radio until the songs started to repeat. He looked out the window at the looping landscape.
“So this is it, huh,” Nathan said.
“Yep,” his dad said.
When they finally got to their first stop of the route, Nathan’s dad came alive. He chatted up cashiers and slapped fellow truckers on the back. He made jokes. He laughed.
“That’s what keeps me sane,” his dad said as they walked back to the truck. “Uh, and coming home to you and your mom, of course.”
When it came time to figure out what to do with his life, Nathan realized he didn’t have many options. He liked sports, but he was bad at them. He was better at school, but not good enough to do much more than graduate it. And so, he took a job with his dad’s old company and settled into the familiar, bearable mundanity of truck driving.
The job was boring, but Nathan still didn’t bitch. The road was lonely, but the impromptu truck stop get-togethers that had always kept his dad sane did the same for him. He met a woman, got married, tried to start a family, couldn’t. His life was functional and adequate.
But then the truck stop cashiers were replaced with virtual kiosks, and before long the truckers were replaced, too. At first, they were replaced with college kids in school-logo hoodies and plaid pajama pants, who earned credit hours and built their resumes by sitting in trucks as the robots drove, ready to perform an emergency debugging if necessary. At the newly automated truck stops, they’d huddle together in diner booths, hunched over their company-issued laptops, an impenetrable mass from another world.
Nathan tried to be sociable. He’d sidle up and remark on the storm clouds rolling in, or ask about their rigs, but he was never met with much more than a pursed-lip smile, the sort of smile you smile at someone when you don’t know why they’re talking to you but you don’t want to be an asshole. After the briefest acknowledgement of his existence, they’d return their attention to the apps they were developing or the computer game they were silently playing together.
Eventually, even the college kids disappeared, taking their Ivy League degrees to shiny tech campuses and leaving the truck stops even emptier than before. There was no longer any respite from the loneliness, no oasis of humanity. Nathan’s company cut pay to keep up with their high-tech competitors, forcing him to go on more routes with less downtime. When he was home, he was irritable and rude, lashing out at his wife for the smallest of things. One day, he returned home to find that she hadn’t gone grocery shopping yet, and he malfunctioned. He pulled out all the food that was still in the fridge and threw it across the kitchen as she sobbed in the backyard. The next day, she was gone.

This rush of memory may have led Nathan to some sort of grand realization if his mind weren’t subsequently numbed by the tedium of the rest of his route. As Kansas flattened out and bled imperceptibly into eastern Colorado, his heart rate slowed. The intense familiarity of his surroundings, the unending hours of sameness, and the brief nap he took outside Denver conspired to push the Gail incident far away by the time he got to the warehouse in Provo. And then it was back east, back to his dark, empty house. Back to normal.

It was his next time west when the subconscious shift in Nathan’s routine became apparent. He made it most of the way across Kansas without incident and was right on target to take his usual break in Colby when he noticed himself looking for the Ogallah exit. He had only the faintest understanding of why he was letting himself abandon his schedule with no regard for logic, comfort, or regularity — until he pushed through the front door of the PUMP ‘N’ SNACK and heard the bell jingle. Suddenly, he felt gravity trying to pull his insides out through his ill-fitting jeans. Gail’s voice made the same shape as before: “Welcome, stranger!”
It was like coming-to after blacking out. Nathan turned around, and this time, he managed a smile.
“Oh, now weren’t you in here not too long ago?” Gail asked.
“Sure was,” Nathan somehow said. “Gail, right?”
Gail looked exactly as she had the first time, right down to the way her split ends rested on her slightly hunched shoulders. Even her baggy red and white polo shirt seemed to be wrinkled in the same places.
“That’s right,” she said. This was, suddenly, a rapport. Nathan didn’t even have a guess as to how many months it’d been since he’d had anything close to a rapport with anyone. “And what was your name again, hon?”
“I don’t think I ever said,” Nathan said. “I kinda was in a rush.”
“Oh yeah,” Gail said. “Shitter.” She threw her head back and laughed. Nathan could see every one of her bright teeth and how they leaned against each other consolingly. He tried to laugh too, but he coughed instead.
“Yeah, sorry about that,” he said. “Pretty rude of me, I guess.”
“Oh, I’ve heard much worse, believe me,” Gail said. “Mostly from my kids, but still.”
Nathan couldn’t think of a response fast enough. He wanted to ask her about her kids, her job, her life, but his brain couldn’t come up with the words.
Instead, he went back to the shitter. He sat on the toilet for what felt like a reasonable amount of time, and then he got up, flushed, and washed his hands. The bathroom cleaning log was another long list of nothing but GAILs.
He attempted a casual walk out of the restroom and pretended to browse the aisles for a minute or so before grabbing his seeds and soda. He built up enough confidence to perform a full-on mosey to the counter and even made eye contact with Gail as he handed over the goods. They completed the transaction, and this time he barely made a sound when her finger glanced his palm.
“Alright, well,” Nathan said.
“Yep, drive safe,” Gail said.
Nathan made his way to the door. As the bell above jingled, Gail leaned over the counter and called out: “Is that your truck out there?”
Nathan stopped. He straddled the threshold between outside and in, elbowing the heavy glass door open. Did she say something?
“Did you say something?” Nathan said.
“That’s your truck, yeah?”
Nathan looked outside as if he needed visual confirmation.
“Oh. Uh, yeah. Sure is.”
“We don’t see a lot of truckers here anymore,” Gail said.
Nathan waited for Gail to say more, but she didn’t.
“Ah. Yeah.”
Gail re-smiled, prompting Nathan to nod vaguely. Then he started walking toward his truck, letting the door swing shut behind him. The parking lot was empty except for dust, and seemed to expand to the horizon in every direction.
“Nice lady,” he said.
He climbed into the cab and made his way west. Somewhere between Kanorado and Arriba, he noticed how his protruding belly jiggled along with the road. He pulled his seat belt up in an effort to keep his stomach still, but it slipped right back down to his abdomen. The ride to Provo smoothed out his mind again, and the hum of the engine replaced his thoughts.

Soon, as per the routine, Nathan was home, sprawled out on his couch, watching baseball. It was nighttime, and his TV provided the only light in the room. The pitcher fired a fastball into the catcher’s mitt, and a sophisticated radar-based umpiring system that had been scientifically proven to be 99.99% accurate declared it a strike.
“C’mon,” Nathan said. “That was outside.”
A few innings later, a strange sound emanated from somewhere. It took a few repetitions of the shrill, tinny tones for Nathan to realize it was his phone. He had some trouble digging it out from under a pile of drone-delivered pizza boxes but managed to pick it up before the final ring. He paused the game and gurgled “Hello?” through a mouthful of Cherry Coke he hadn’t quite swallowed yet.
“Nathan? It’s Trav.”
Trav was the son of Travis Sr., the man who’d hired Nathan thirty years ago. He had never met Trav, and had only ever communicated with him via work email, but he didn’t much care for the kid anyway. Trav’s smarmy, MBA-tinged phone voice only reinforced Nathan’s opinion.
“Yeah?”
“Hey, bud. Sorry to be calling you so late, is this a good time?”
Nathan shrugged.
“Nathan?”
“Yeah.”
Trav cleared his throat.
“Hey, so, I know this is weird, but we’re having an all-hands tomorrow morning,” the younger Travis continued. “I wanted to call you to make sure you knew. Mandatory for all drivers.”
“Okay,” Nathan said. “And what’s it about?”
“Just some changes at the company,” Trav said. “Can you be there? 8 AM.”
“I got a shipment tomorrow,” Nathan said.
“Don’t worry about that. Bring your cab.”
“I don’t have a car, so, yeah.”
“Perfect. Thanks, bud,” Trav said. The line went dead.
Nathan tossed the phone aside and unpaused the game. He watched one more pitch and immediately paused it again.
“Shit,” he said.

Alex Nichols is a graduate of the University of Kansas, where he studied English Literature and Creative Writing. He is currently an education services writer living in Boulder, Colorado