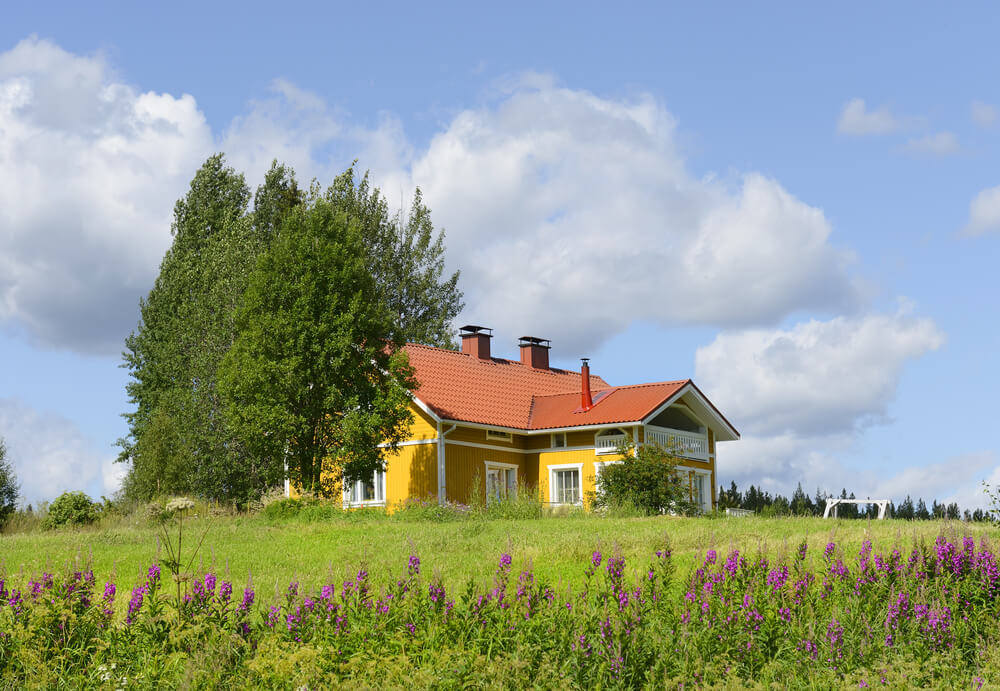 I saw the house in person for the first time during a January thaw. It was the kind that taunts the world with the hope of spring by covering the grass with a single layer of bubbled ice, attempting to hide the hint of green below a layer of frosted glass. The house shone like a pocket of sunshine in cold and gray and ice, offering a haven from winter and the feelings of despair that so often comes with living. My aging car crested the hill and came to rest with a crunch in the gravel drive. I didn’t put on my gloves before I braved the chill outside, climbed the four concrete steps of the yellow house, and turned the frozen knob of the front door fated to become mine.
The inside was bare in many ways: no carpet covering the aged hardwood floors, no books filling the built-in shelves that lined the walls of what the relator called “the den,” no curtains hanging over windows.
“It’s been empty since they had the auction last September,” she said as we climbed the creaking staircase to the second floor. I watched her dated hairstyle bounce with each step. She was the kind of woman who called everyone “hun.”
“Now, I’ve got a surprise for you, hun,” she said turning to face me. “You’re gonna love this.” She swung open a door whose hinges demanded a squirt of WD-40 to reveal a room full with wide windows, which even on a winter day let natural light in with ease.
“It’s an art studio!” she squealed in much the same tone a toddler might use to admire the baby doll Santa brought on Christmas morning. “Norma Jean was an amateur, but she never had kids, so she converted this bedroom into a studio. The lighting is ideal, and look,” she said drawing my attention to the sidewall of cupboards and a sink. “There’s plenty of space to store your supplies and even a sink to rinse your brushes or hands or whatever.”
She looked at me with hope. I looked at the house with love.

I moved in the evening that the sale closed. By then, sunlight was winning few minutes back from the night each passing day, and the sloping hill upon which the yellow house sat had begun to shed its winter brown in favor of the lush green waves the realtor had promised would arrive by early summer. I thanked her for the aged brass key to the front door; she wrapped her arms around me.
“She would have liked knowing that you were the one who bought her house,” she whispered mid-hug. From my new front steps, I waved goodbye as her car bumped down the gravel drive.
I spent the first night on the worn wood of the living room floor, tucked in a sleeping bag, staring up at the ceiling, and listening to the house settle into life with a new owner. My brother came down to move in the furniture I had: a dated bedframe, a dented dresser, a couple of flat-pack boxes that would soon become a kitchen table and a television stand, a couple of ladder-back chairs (one with a missing rung), and a mattress still in its plastic. A dozen or so boxes were trucked in as well, containing things to fill kitchen cupboards, bookshelves, and my studio’s cupboards. His new wife helped me find places for it all. I fiddled with the set-up of my drawing table and the easel so that, whenever I would look up from my work, I could still see the gentle rise and fall. Hilly fields, soon to be sprinkled with wildflowers and patches of aging trees, promised colorful inspiration in the fall.
Seated at the freshly assembled table and while downing a round of drinks, she remarked,
“It’s so quiet out here.”
“It’s peaceful,” I said.
“Isolated is more like it,” he said.
“Nearest neighbors are at the bottom of the hill,” I said.
The newlyweds exchanged subtle frowns. They left to return to the neighboring city the next morning.

March scared away the threat of snow, and the locals began to emerge from hibernation and periodically knock at my front door.
One bearing a pan of welcome-brownies said, “It’s strange to think of someone else livin’ in Norma’s house. Sixty-seven years since it had anyone else.”
“No one lived with her?”
“No, her husband John died young. She never had ‘nother.”
A young mother with a baby propped on her hip passed a fruit basket through the open door frame. “So nice to have a new face in the area. I was beginning to think May here,” she said patting the baby’s back, “would be the only new face around.”
“Oh?”
“Most people don’t move here. They either grew up here or they’re trying to get out. Why, even Charlie Murphy is leaving for college next year.”
“I like here,” I said. “It’s peaceful.”
Later that week, through the studio windows, I spied an older man hobbling towards my door. I darted down the steps and opened the door before he knocked. He sported suspenders and the thickest pair of lenses I’d ever seen in a pair of glasses and carried a loaf of something wrapped in tin foil.
“Name’s Marvin,” he said. “My wife, Lucy, made you some banana bread. Don’t know if you like that or not, but she insisted. She and Norma used to yammer on about their gardens together.”
“How nice.”
“She’ll be stopping by sometime, when her cold goes away. Do you garden?”
“I never have before.”
“Well, Lucy and I run the co-op in town. You need some help with them tulips that’s ‘bout to sprout, you come see us,” Marvin said.
“Tulips?” I asked.
“Sure, the bulbs gotta still be in them flower beds. Norma Jean was famous for ‘em. For all her flowers, actually. She won quite a few blue ribbons at the county fair.”
Marvin was right. A few warm days later and shoots, like clusters of tender green arrowheads, began to poke their way through the dirt along the front of the yellow house. The stream of investigating neighbors slowed, and I spent the new few mornings in my gravel driveway, with my easel and a bucket of painting supplies, desperate to capture my ship of yellow in the sea of green waves of rolling grass.
“Looks good,” he said. I jumped, dropped my brush on the ground, spun on my heels and found myself staring at a young man.
“Sorry, I didn’t mean…,” he said. He stood there with hands plunged in his front pockets. Despite their depth, his long, rigid arms caused his shoulders to rise. He looked like a turtle trying to suck himself into a hooded sweatshirt shell. He stared down at his work boots marred with black stains of some other industrial grime.
“No, no, it’s fine. I—I didn’t hear you coming,” I said, as I wiped my palms on the bottom of my shirt. He stood still, not breaking his downward gaze. “So, you like it?” I asked.
“Yes,” he raised his face to examine the canvas and nodded, “especially the tulips.”
“I do love the way the purple works with the house’s yellow.”
“Do you garden?”
“Not really,” I said. “Did you know the woman who lived here before?” He sucked in an audible breath as he shifted his gaze from the canvas to the tulips and house behind it. He nodded.
“She must have been a nice woman. Everyone seemed to have liked her.”
“She was,” he said. He turned to meet my eyes for the first time. “She left me the house.”
“This house?” I asked. From his pocket, he pulled a photograph and handed it to me. His hands were marked with the kind of black industrial dirt on his boots, the kind that doesn’t wash away; it only wears away with time.
“I sold it to pay for college. I wanted to say thank you.” With that he turned on his heels and began to march back down the hill.
“You’re welcome,” I managed to yell after a moment, though I don’t know if he heard me. I looked at the picture in my hand. Three faded faces stared back: two young boys and an older woman wearing a floppy, wide-brimmed straw hat. The trio sat on the familiar concrete steps with the same front door, the same yellow background, and the ancestors of the purple tulips I plotted on my canvas moments earlier. They each clasped a bare Popsicle stick and wore stained smiles. I flipped the print over. In the cramped cursive of an arthritic hand it said, “Me and the Murphy boys. Derek aged seven. Charlie aged four.”
I tacked the photo to the corner of my easel. To the image of the house’s previous owner I said, “Hello, Norma Jean.”

Sydney M. Crago is a graduate of Baldwin Wallace University. She spends her free time exploring, baking, and reading.