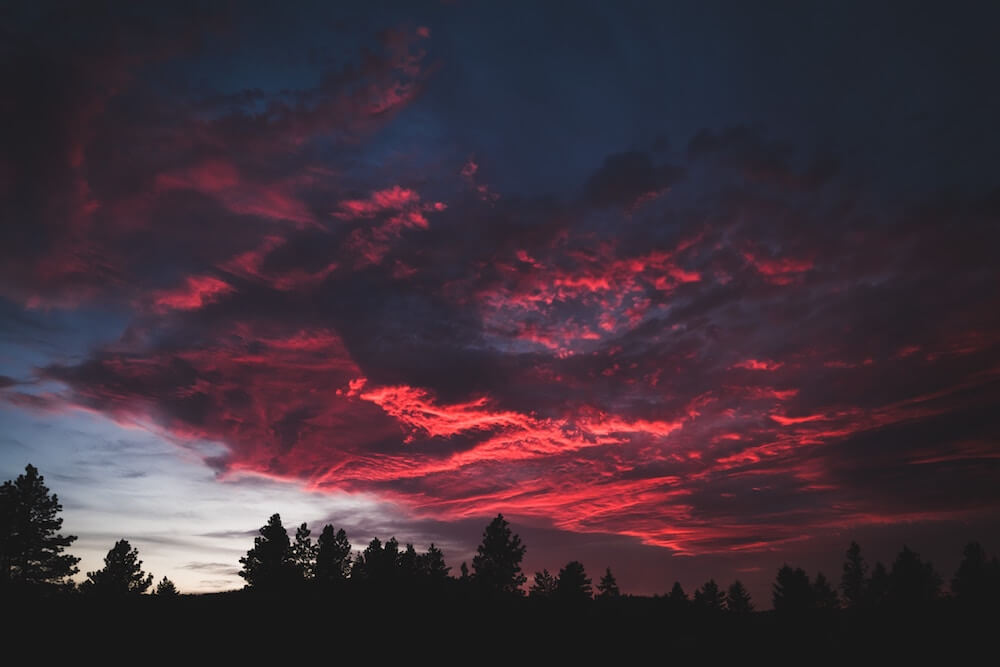 The setting sun bends the mountain’s face with an evening redness. Light pours through the trees like blood trickling out of a wound. Grady watches from the lake’s edge, the water black and still and seemingly depthless. A hawk encircles the lake and flapping its wings wide it glides through a sky so blue it’s as if his fingers would turn blue if he raised them up. The moon whispers beyond the mountains in the distance. He lowers and smooths the ground for a pebble and upon finding a crescent shaped stone, winds his arm and flings it into the lake where it skips three times then sinks.
By the time he walks through the double doors of the rustic eatery she’s already finished one glass of wine. His boots click along the floorboards. She looks up from the wooden table and her face appears pale and waning and admittedly cadaverous save the red lining jagged around her dimples. The chair grinds against the floor as he pulls it out and sits down. A candle flickers between them in a glass vase. Wax puddles at the bottom. The few that are in the eatery speak quietly and keep their eyes to themselves.
“I like that dress.”
She snorts. “Do you think I wore this by mistake?”
They see each other through shadowed filters as the lighting in the room consists of the candle’s taciturn glow and whatever sunlight spills off the blinds.
“We have to go soon.”
“Better start drinking then.”
She signals for a server and asks for the bottle of wine and the server leaves only to return a moment later with a green bottle. She refills her glass, and he reaches for the bottle’s neck and wipes away a line of dust from the table and raising the bottle over his lips the red wine falls in a glistening arch like water from a marble fountainhead. He narrows his gaze and doesn’t feel altogether whole, as if part of him is fading with the sun’s light.
“Where have you been?”
“I went for a walk.”
“You hate walks.”
“I know.”
The wine slowly drains from her glass, and she leans over the table for the bottle and refills it. Silverware rattles. A raucous outburst of laughter comes from the back of the room. It quiets, and he listens to his breath whistle around the bottle’s mouth.
“There are worse things than this.”
“Than what?”
She shrugs. “Leaving.”
His gaze falters getting lost somewhere in the veiled darkness, the orange sunlight nothing but a pool of blood below the windows.
“There are worse things than getting shot in the head too.”
“I’m trying to be optimistic.”
“Maybe that’s part of the problem.”
“What is?”
“Trying to create your own light when the real light is slipping away.”
“I wish you could just speak normally.”
Chairs scrape against the floor. The double doors swing open ricocheting with a dull thud and the room freezes as heads turn to see the party responsible for the clatter only they see darkness and just darkness. The doors settle after a few moments of jauntily flapping. He pulls from the bottle. The candle burns still and short offering little light to be reflected by the vase.
“We should go.”
“Alright.”
He places the money on the table beside the candle. The chairs scrape terribly, and briefly they stand across from each other simply staring. Long faces. Empty faces. Expressions like the final cries of light, a candle flickering in the wind, waning, simmering. She leaves the table without pushing her chair in, and he does the same and the empty wine bottle stands atop the money, and they shove through the double doors into the night.
They walk down the dirt road empty save a slew of wagons stationed along the side. The sky, dark and starless, lowers over their heads. He brushes her hand and it feels cold and limp, and he wraps his hand around it with the hope it warms and when it doesn’t he lets go and spits.
“It’s a nice night.”
“Could be nicer.”
Clouds part in the sky and the moon, whole and white and radiating amongst the dreary blackness, slides into view. The light catches her face, no longer drawn and melancholic but amiably dispositioned with a subtle grin. The train whistles, smoke pluming towards the gray clouds. They turn a corner and as the station materializes out of the thin air he halts by the side of the road, and she strides three more times before stopping.
“This isn’t right.”
“No. It isn’t.”
He sucks on his teeth. She opens her stance and takes in the night, which now features the approaching train. Her arms rise as if being pulled in opposite directions. A single tear dribbles down her face. Under a paleness that lightens her skin to an almost transparent aesthetic, a single tear splashes onto the red dirt.
“Maybe that’s not the point though.”
“What other point is there?”
“I have to go.”
Her steps are noiseless as she walks away. He watches and contemplates running after her. She stops in the distance and in the moonlight spins to look back and ever so quickly, in the time it takes to strike a match, he believes her to be turning around and his chest rises and expands. He levitates above the red dirt where he crashes the moment she spins back around, weakly vanishing into the night. As if she were nothing more than an apparition to begin with and everything inside of him an illusion as well.

Years pass before he sees her again. She hunches over the bar surrounded by empty shot glasses that catch and diffuse and overturn the room’s light emanating from the bulbs dangling from the ceiling. The barman comes around when he notices her flimsy hand twirling in the darkened space and fills another glass with golden liquid. She looks down at it as if searching for a bug and her shoulders jerk following a belch. Without using her hands, she takes the glass in her mouth and cranes her neck and when she sets the glass back down it’s empty, reflecting the light like the others. He sits down next to her and orders a beer. The barman sets the glass down on a napkin, foam overflowing and oozing down the sides. Her head rolls lazily. She opens to face him, her eyes tapered into narrow slits, grinning widely, pink tongue hanging limply over her lips.
“What’s it going to take for you to buy me a drink?”
He sips his beer but doesn’t turn. She pokes his shoulder.
“You look familiar. What’s your name?”
“I don’t have a name.”
Her hand falls on his shoulder. He closes his eyes and strains to hold back tears.
“How about we go up to my room?” words tickling his neck.
“I’m fine, miss.”
She pulls away and waves for another drink. “That’s very rude.”
“I’m sorry, miss.”
They sit and drink. Neither says anything for some time.
“I didn’t always used to be like this,” she says finally.
“Neither did I.”
“Can I ask you a question?”
He nods and takes a long drink.
“Do you think it’s my fault I’m here?”
“I don’t think it’s anyone’s fault they’re anywhere.”
“I knew someone who used to say things like that. I’d like to see him again.”
She drinks. He drinks. They are drinking together at the bar, faces sallow in the darkness, cheeks carven and hollow like her glasses. He sniffles and wipes his face with the soggy napkin.
“If it’s no one’s fault, who’s to blame?”
“There’s no one to blame.”
“I don’t believe that.”
“Alright.”
“Why do you believe that?”
“I don’t know. Don’t see any point in blaming I guess.”
“And why is that?”
He waits a long time before responding. “If you had someone to blame, would that make you not here right now?”
“I’m sorry.”
When he turns she is looking right at him.
“Nothing to be sorry about, miss.”
Her eyelids flutter. “Then I’m just sorry.”
He turns and waves and the barman returns with another glass of beer.
“Aren’t we all.”
She exhales deeply and loudly. “No. We aren’t.”
She climbs down from her chair. Her steps veer to the side taking her in and out of the light. He doesn’t see her leave. After his beer, he leaves and walks down the road away from the town and its people, and he stands alone at the commencement of the pastoral land, black and calm in the night. He crouches and lies supine in the grass. A streak of light tails through the sky. Then another. Then another. As if the following blurs were dependent on their predecessors. He widens his gaze and waits for an origin of the light to announce itself, and he waits and waits.