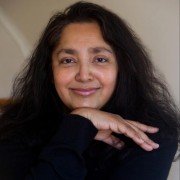 Chaya Bhuvaneswar's work has appeared or is forthcoming in Narrative Magazine, Narrative Northeast, The Awl, Michigan Quarterly Review, and elsewhere.