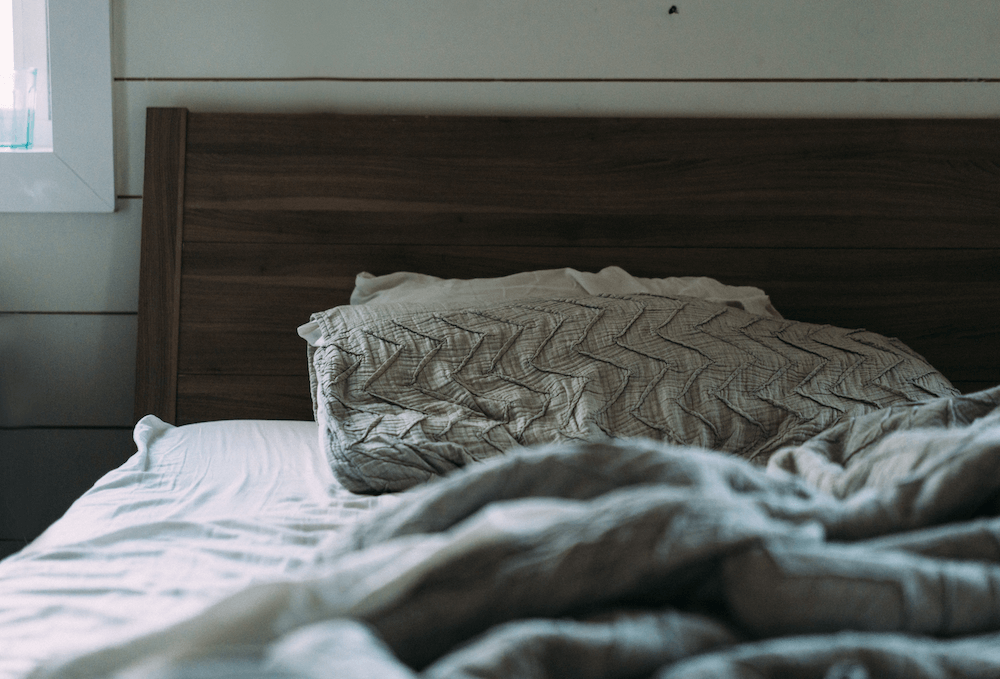 We used to sleep in separate rooms.
When I traveled for work, I slept in middle-of-the-road hotels and would call Bob to say goodnight after I had finished my chicken Caesar salad and glass of house chardonnay. When I was home, we would sleep separately if one of us had to get up early for work. And when I was nursing one of our two kids or, later, if one of them had a tummy ache or was scared by the windows screeching with the Santa Ana winds, it was just easier to nod off on the daybed.
And then our young daughter was struck by a virus that unleashed a baffling mix of physical and emotional symptoms. We were trapped in a vortex of brain scans and second opinions and medications and rented wheelchairs and acupuncturists and healers and school conferences and tutors and therapists and therapeutic boarding schools, while still trying to show up for our son. Both of us were in crisis, but Bob had to maintain his career as a screenwriter. I surrendered my job to keep our family afloat. Our phones never left our sides. Our bedtime reading was restricted to medical literature. Our sleep, while necessary like eating and showering, never restored us.
It was during this decade that my drinking tipped. My skin had worn thin and I began to hide from Bob how much wine I needed as an anesthetic against the despair. I was still on duty during the day, but adrift at night. After dinner, a few glasses in, I would doze off. Bob would take over—mediating sibling disputes, managing health complaints and homework meltdowns—and then he would sleep alone.
Even when I got sober, I still slept in my study to get up early for AA Sunrise Meetings.
Now we sleep most of our nights together.
About 8:30 I strip off my clothing and nestle into my oatmeal-colored bathrobe. My short hair, once corn-silk blonde, is now the color of driftwood. Bob swaps his skinny jeans for old sweat pants and his Jack Purcells for suede Birkenstocks. His hair, once brown with springy curls, has turned charcoal with silver streaks, cropped close.
We move to my study, which, once a foxhole, has become a downy cocoon, the liminal space between day and night. I recline on the leather chair as Bob settles into the daybed. We no longer panic when the phone rings. The calls are benign now—our daughter updating us on the latest college protest or our son inviting us to his next improv show. Our crises revolve around our dogs, one that bites and another that wears doggie diapers. Our biggest decision is whether to watch The Americans, Veep, or Transparent.
Sometime after 9:30 we brush our teeth, take bedtime meds. Bob sheds his sweats. I slip off my robe, exposing the folds and moles of a 56-year-old. I have no makeup to take off. I no longer need to hide.
We climb into bed. He’s on the right, I’m on the left. When we travel, I have to remember which side of the bed is mine.
No longer shackled with medical literature, our reading choices are vast. Bob fires up his Kindle. I pull a book from the stack by my bed. Occasionally I pick up the lighter sections of the Times—articles on the Cronut’s migration to L.A., or a comparison of real estate prices in Echo Park and Brooklyn.
One of us, usually Bob, decides when it’s time to turn off the lights.
We scoot to the middle of the bed and begin the origami folding of bodies. I turn onto my right side. Pull my legs up so Bob can tuck around me. I shake my bottom against his belly and whisper, “Best moment of the day.” He kisses my back. His hand slides over my breast, pausing briefly. Just a touch. Occasionally he lingers—an unspoken question. Most evenings his arm simply comes around to hold me until he rolls to his side of the bed. I listen to his rich gentle breath as he relaxes into sleep.
We have survived.

Hilary Nelson Jacobs is a writer living in the Los Angeles foothills. As a recovering strategic planner, she has turned to writing creative nonfiction, embracing the reality that life confounds our careful planning. Hilary has been published in “Role Reboot”and is working on an essay collection, “Harvard Didn’t Prepare Me For Life.” Hilary can be reached at authorhnj@gmail.com or on Twitter at @HilaryNJacobs.