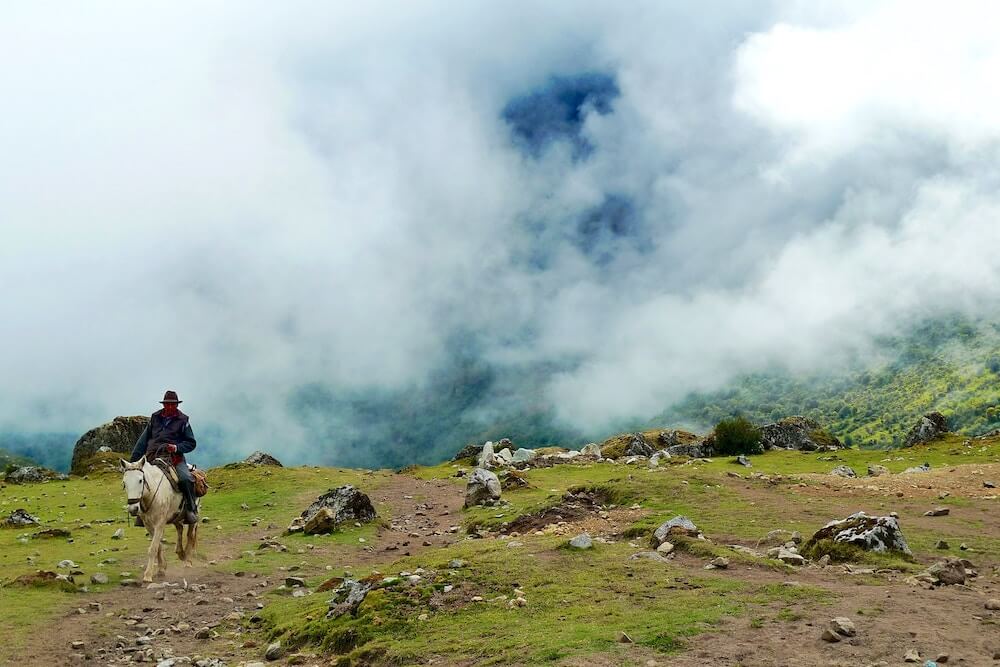 The old man and his gray horse came trotting over the green hill propelled forward by the setting sun that burned behind his head like an orange halo radiating in the evening. Neither boy said anything at first. They lay side by side with their weight bearing down full force on their horses, figures hidden by a series of yellow boulders as big as any they had ever seen. The old man was whistling quietly and his wrinkled face bearded by gray hairs rested amiably. Above in the sky white clouds whose puffed arches were charred gray by the invading darkness flew westward like a flock of birds. At the top of the hill the old man dismounted and stood by his gray horse that he believed to be one with its soul and stared out at the flat plains below.

“I sure hope you boys aren’t going to shoot me. And if you’re planning on robbing me just know that what you see is what I got.”

He reached into his saddlebag for a cigarette, which he rolled around between his fingers before putting it in his mouth and lighting it with a match.

The boys looked at one another, pale faces shadowed by the boulders jagged peaks. The horses they lay on twitched and chuffed air and finally whinnied loud enough that the old man’s horse turned towards the boulders. Still the boys did not move. The old man drew on his thin cigarette and blew rings of smoke that rose steadily before vaporizing in the slanted panes of orange light.

“Not much point in hiding now. C’mon. I’m not going to hurt you.”

The older of the two boys craned his neck and spat. He had long black hair and clusters of freckles along his upper lip that was damp with sweat and his eyes were the color of watered down mud yet the boy could hold a hard gaze with any a man.

“Not you we’re worried about.”

The old man looked at the boulders and kicked a rock with his boot then sucked on his stub of a cigarette and smiled.

The boys looked at each other. The younger one whose name was Billy blinked awfully fast. His lips trembled and his right foot began to cramp and ache as neither boy had tasted water in almost two days. The older boy closed his eyes and chewed nervously on his cheek for a moment then thrust himself up from the horse and dried clay and slowly walked out into the open and stood staring at the old man who’d yet to acknowledge his presence.

The old man tossed his cigarette and turned to face the boy.

“What about your friend?”

The older boy clicked his tongue loudly followed by the tumbling of loose pebbles and Billy holding the bridle reins of a horse so white it seemed to glow in the orange filter of dusk. They stood and the older boy held Billy’s hand which felt cold in his palm and the old man reached for another cigarette only he didn’t light this one after putting it in his mouth.

“Where are you two headed?” He smiled and rolled the cigarette between his lips.

The gray horse stood without being held and studied the plains with depthless eyes. The old man raised a cheek at the boys and in each of them saw a sliver of himself. The older boy’s brown eyes flickered to the distance and back.

“Who is it you’re running from?”

“Not running from anyone.”

Billy wiggled his hand free to wipe away a tear that caught the sun’s light as it rolled down his cheek.

The older boy said nothing and turned to the distance.

“That’s some horse there. Where’d you get it?”

The old man cracked a match against his boot and raised the wavering flame to the cigarette and inhaled deeply holding for a count of three before clouding his face with a gray fog. “Pretty nice of him to let you take it.”

“And you also didn’t say that you stole John Clay’s horse but by God there it is. Right next to you.”

The shadow of a hawk like a black arrow graced the patch of grass sailing with ease across the cracked clay floor and vanishing into thin air a moment later. As if it didn’t exist to begin with. Like all living things were a swipe of God’s finger away from never existing. The old man smoothed his horse’s sparkling mane. Billy’s legs shook uncontrollably. His heart throbbed beneath his sweat-stained flannel, a gift from his mother on his last birthday. The older boy clicked his jaw and flared both nostrils as his eyes unknowingly narrowed towards the horizon where gray dust ascended beneath the hooves of three horses.

“Shut it,” hollered the older boy.

The old man followed their eyes and took in the expansive terrain of stale land and tawny rocks and riders surging their way in a swift sweeping motion with his head. He turned to face the boys. He smoked and kicked the ground.

“Why’d you do it?” his voice soft and dour unlike the explosion of light to the west as the last of the sun’s cries collided with the earth.

The older boy looked for the first time towards the east. Dark and starless and bearing down on him with an immense weight he had never experienced prior to this moment on the hill. A weight he never imagined had ever existed. When he turned to face the old man, it wasn’t a stare of petulance he omitted as much as a painful innocence the same that burns at the core of all things like the coals of a fire and often gets forgotten when staring at gravestones and the past and starless skies. He sniffled and took Billy’s hand.

The old man scoffed comically and coughed a hoarse cough that forced him to bend over and spit a dark mucous between the grooves in the earth’s surface. He straightened and looked at the younger boy. The thunderous sound of hooves charging echoed out into the night.

“We didn’t know it was John Clay’s horse.”

“I’d say every damn soul within a hundred miles knows that’s John Clay’s horse but here you are.”

He turned to the west and the sun had set and in its wake a beautiful swirl of pink and purple light and he glanced at the approaching riders now about a rifle shot away and the horses heavy breathing audible and the men’s faces veiled by a black shadow he thought might always be there even come morning. Billy sobbed and hugged the older boy who cocked his head to the side like a small dog.

The boy nodded. He could not feel his heart beat. Tears welled in his eyes. The old man set his face back and stared up at the sky and his eyes gleamed upon a pair of stars twinkling from opposite ends of the dome. A sudden gust of wind blew through the plains. The old man looked at the boys and took a step towards them and then another and the gray horse followed close behind and the riders were now some hundred yards away with the men’s snarls interlaced with the resounding claps of the hooves and the old man whispered in his horse’s ear then snatched the reins from Billy’s hand. Neither of the boys said anything and neither looked at the old man who smiled down at them and felt a ball of warmth expound upon the earth as they mounted the gray horse and rode off into the distance.

The old man walked to the edge of the hill and stared at the encroaching riders and he felt a fire inside his stomach unlike any he had felt before and as the bullets tore through his chest like a shadow through the afternoon and his head popped with a vomit of red sludge he thought if the greatest damnations in the history of the world were not simply products of innocent boredom.