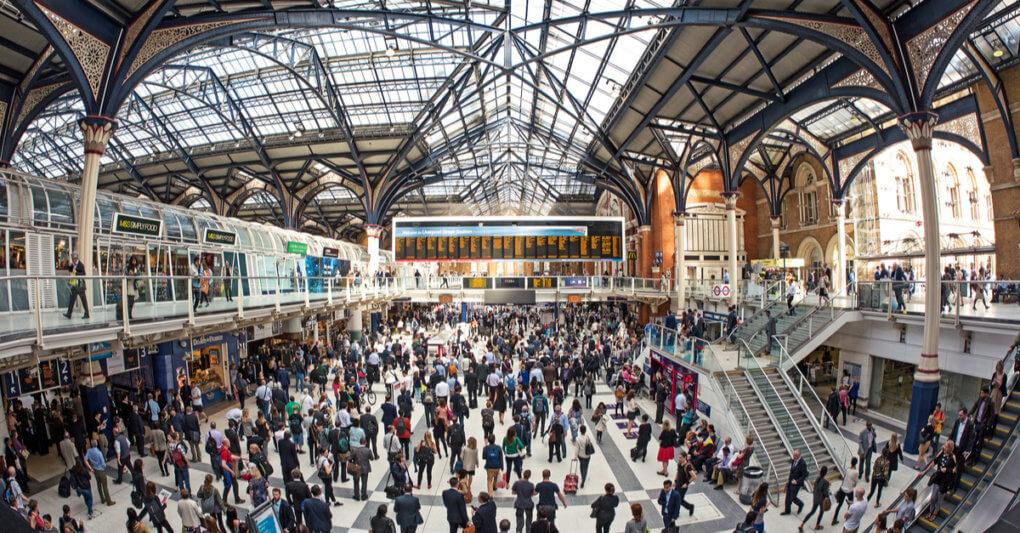 Gina ran down the escalator, anxious to catch the Tube train that could be heard pulling into the platform. Pushing past a woman who was walking slowly, Gina huffed. I need a coffee, she thought, blaming exhaustion for the show of impatience. She’d missed breakfast because getting to work on time rated as more important, and she’d struggled to get out of bed due to lack of sleep.

The insomnia came about because of Bradley, or more accurately because of her expectation that he should reply to her text message; he hadn’t responded. After their first date, Gina got carried away, imagining herself in a relationship with Bradley. There seemed to be a mutual attraction. Two months later, with little communication from him apart from the odd text or sporadic interaction on Facebook, she was starting to feel ignored.

Gina jumped onto the Tube train and turned around only to notice the slow-walking woman stepping into the carriage.

Angela looked at the young woman. This must be her, the thought came from out of nowhere, the one I was warned about. The girl had shoved her out of the way before boarding the train. I have to do it now. A feeling of despair took hold before all went black.

The knife—a small, serrated kitchen knife—had been plunged deep into Gina’s shoulder, narrowly missing an artery. ‘You’re quite a lucky girl; must have had an angel on your shoulder, Miss Turner. If it had just been… perhaps a centimetre to the left, you may not have survived to tell the tale.’

Lucky? Gina didn’t feel lucky to have been stabbed by a deranged woman on a train. ‘If I’d had an angel with me, surely they would’ve kept that crazy woman away from me.’

The doctor laughed but said nothing further.

One minute she’d been on the train, the next lying in a hospital bed. As the doctor relayed the story, pictures formed in Gina’s mind: the stranger she’d pushed aside who’d subsequently boarded the train; the woman’s hollow stare. Gina remembered feeling intimidated. It all happened so quickly. Gina turned around to avoid the hard stare; the woman seemed angry. Then there were screams. For a short while Gina stood still, stunned, watching people screaming, confused by their reactions… Did a terrorist board the train? Maybe someone with a gun, or someone with a belt of explosives?

‘Are you all right?’ asked a fellow passenger, his eyes wide as he looked at Gina. Then he’d called out to the other passengers: ‘Quick, someone call an ambulance… Pull the alarm! We need something for the wound, to stem the flow…’

Gina lowered her gaze and noticed something red: blood… everywhere. Then nothing.

Lying on the hospital bed, Gina thought back over the events of the morning. She had been in such a hurry to get to work. It all seemed so unimportant now. No one should have to work 9 to 5 these days, but Sue, her boss, was so old-fashioned yet vehemently in denial about getting older.

A few months ago, one staff member innocently commented that fifty-something Sue might be menopausal as she always felt hot and insisted on opening the windows in the office even on cold days. Sue responded sharply with: ‘I’m all woman.’ Gina baulked at the response, wanting to say something sarcastic like, ‘Men don’t go through the menopause’, but she stopped herself, for fear of losing her job.

Gina couldn’t help smiling as an image came into her mind’s eye: Sue looking at the clock, cheeks reddening, nose up in the air as usual. ‘Does anyone know where Gina is?’

Gina pushed the thoughts away and sneered. Sue was to blame for all of it, creating the paranoia about being late resulting in the frenzied impatience to board the train.

‘Yes. I definitely saw a young woman. I can still see her face if I close my eyes; she’d pushed past me to get onto the train. I remember thinking that young people have no patience these days.’ Angela looked down at her hands. ‘I don’t remember anything else after that. I’d assumed I must have passed out.’

The knife had been in Angela’s bag because she sometimes took cutlery to work, didn’t trust the hygiene in the office kitchen.

‘It seems as if it was a psychotic episode. Have you ever suffered from mental illness in the past?’ The psychiatrist waited for an answer.

‘No,’ Angela lied. It still persisted, the sense of shame. She’d suffered a breakdown many years ago, in her mid-twenties, and spent time in a psychiatric ward. Family and friends drifted away after the episode. Angela was aware that their departure from her life was a reaction caused by fear or ignorance, but it didn’t stop her feelings of inadequacy.

Times had changed; mental illness wasn’t as much of a taboo subject these days, but even being aware of that could not shift Angela’s ingrained lack of inner worth, so entrenched; the idea of revealing the truth, exposing herself, struck her as more daunting a prospect than facing a mountain with an unreachable summit.

Whenever the depression threatened, which it had done quite frequently over the years, she’d found ways to keep it at bay.

Angela often saw herself as more of an onlooker in life, just outside, not fully involved. Friends and colleagues would get excited about things, plan ahead; she’d constantly feel stuck, tormented. Her heightened tension had morphed into a familiar companion, like an old comfort blanket a child might become attached to; it felt safer to stay within its hold. The dark feeling—usually depicted in comics and animation as a black cloud and, ironically, often in a jokey way—remained like an obtrusive shadow, forever present in Angela’s life, at least on the periphery of consciousness. She kept it to herself. Didn’t want to be labelled, didn’t want the stigma.

‘We’ll have to keep you here for a while and do some tests,’ the doctor explained.

‘Is she all right? The girl?’ Even while asking the question, Angela wasn’t sure she wanted to know the answer. Anxiety began to play its mind-games, concocting the worst-case scenario. The girl could be dead or permanently disabled. Flashes of courtrooms, police stations, jail cells, came to mind along with the familiar sense of being guilty, blaming herself for everything.

The doctor’s words battled against Angela’s inner anguish. Was he telling the truth or trying to protect a fragile mind?

‘It could have been much worse,’ continued the psychiatrist. ‘We have to make sure you’re fit to leave, to avoid anything like this happening again.’

‘We believe it was mental illness, so we are going to present a report to the court. It’s a very serious incident.’

The doctor’s eyes gave nothing away. Did it sound believable? Wouldn’t it be best to tell the truth? It was all there in her medical records, after all.

‘It’s quite unusual for someone to do something like this, at your age, Ms Mobrey, without any history of mental illness. Although, it’s not beyond the realms of probability that it was some kind of episode maybe linked to trauma.’

‘I’m not sure what you’re saying, Ms Mobrey. Please elaborate. Are you telling me you deliberately stabbed that girl?’

‘No; no, I wouldn’t do anything like that… I lied about… I do have a history of mental illness.’

With some coaxing from the doctor and many tears, Angela began to open up, unlocking the secrets that were buried deep under years of insecurities, scraping away the untruths, revealing what lay beneath.

Talking about the past felt freeing somehow. The doctor wasn’t being judgemental. He seemed to find it interesting, was asking many questions. It felt almost as if her experience was helping him to learn more. The weight of carrying it all inside for so long slid away bit by bit. The doctor didn’t react in horror but with sympathy, giving her hope and explaining the help they could offer.

‘Don’t worry. You’re not alone. We can help you. In fact, if you’d seen a doctor sooner, chances are this incident might never have happened.’

There’d been an outpouring of sympathy on Facebook. Nothing from Bradley. At first, Gina obsessed over that, almost ignoring all the positive messages. Now, nearly two weeks later, there was still no word from him. Today it didn’t matter: her perspective had changed. The days laid up in a hospital bed offered the gift of time to contemplate what was important.

Gina heard that the woman who’d stabbed her had been admitted to hospital, suffering from mental illness. Reflecting on her own behaviour, Gina couldn’t help wondering how much of what she’d done had provoked the woman’s reaction. Things could have turned out much worse. Gina had expected to feel angry about what happened, but somehow there’d been a mental shift.

Gina walked towards the Tube station platform. Her first day back at work after the “accident”. The doctor at the hospital had given her a leaflet about the symptoms of Post Traumatic Stress Disorder.

Gina took deep breaths, trying to keep her nervousness under control. She walked more slowly than usual and observed the other commuters. Many appeared to be in a rush, oblivious to other people’s needs or existence. Huffing and tutting down escalators and along platforms, cursing everyone around them, the commuters conveniently forgot the real reason for their lateness: they’d set off on their journeys at the last possible moment thereby giving themselves only a limited amount of time to get to where they were going. In this moment, with one-track minds, it was always the person in front of them that was to blame for their slow progress. Always someone else to blame.

The world was moving at a faster pace and people were caught up in it all, too busy to care. She noticed a man shaking his head impatiently as a woman in front of him struggled to place her suitcase on the escalator. These were the tiny sparks of anger that trickled all year round and led to arguments, led to violence, spiralled into social degeneration. The man didn’t offer to help the woman with her suitcase, but rushed past her as soon as she was on the escalator, reminding Gina of the way she had pushed past the older woman a couple of weeks before.

Does it always have to take a tragic or traumatic event to change people? Gina wondered. Just slowing down, taking a deep breath, taking a step back, could avoid so much pain. Such a simple idea, but so difficult to grasp.

There was a man with a walking stick in front of Gina on the station platform, moving very slowly.

Gina stood and waited for the man to reach the door of the carriage. ‘Do you need any help?’ she asked, with a smile.

‘Yes, please dear,’ he smiled back.

Gina thought again of the woman who’d stabbed her. She hoped she’d be all right.