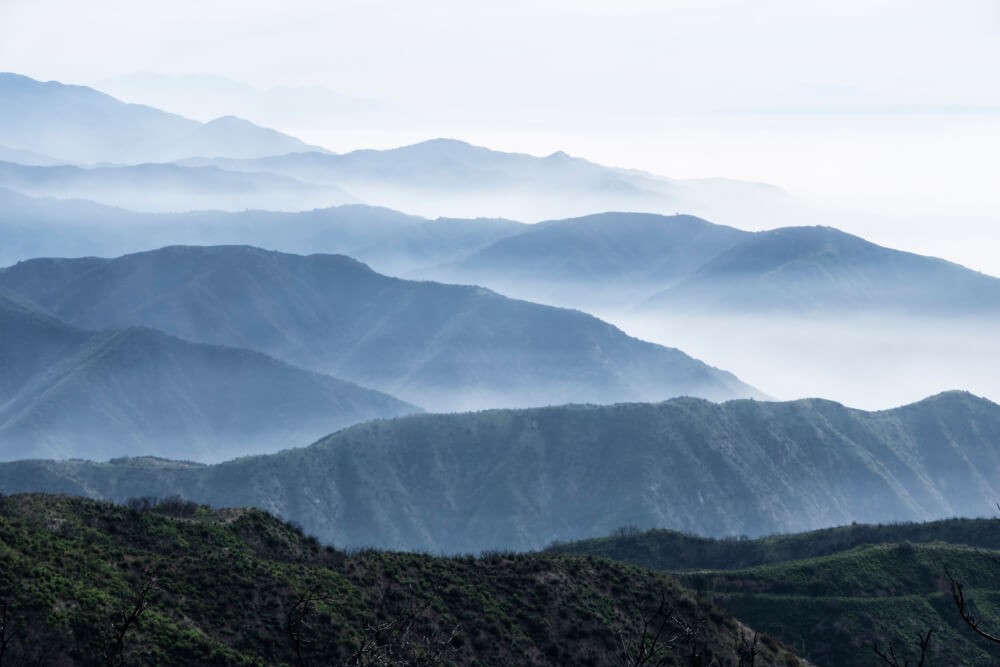 Photo by trekandshoot on Shutterstock

Whenever it rained, my grandma always used to say, “If there is enough blue in the sky to stitch a pair of britches, it is going to get sunny again.”  As a child I didn’t know what that meant.

I looked up into the sky and cried.  How much blue is needed to make britches, I asked myself.  Heck…I wasn’t even sure what britches were.  They are pants right? Jeans? Or do those old school cotton pants count too? In any case, I didn’t understand.  How was I to know when the good times were going to roll again, if I didn’t know how to stitch? I figured it was one of those things old people say after years of failure.  Plus, this was Ohio in the winter.  Do you know how often there are blue skies, or even patches, in Ohio in February? I was doomed, certainly. If not doomed, I was at least going to get wet. I didn’t have an umbrella.  I never did when it rained.  I think that was part of my problem.  I was never prepared for the weather.  I wore pants in the summer, white shoes in downpours, and always forgot my raincoat.

When I was younger, I used to be able to dodge the raindrops.  Some might say this was all in my head, that it was just childish imagination.  But I could.  I could run from my house to my parents’ car on the curb without getting wet – half the time – sometimes my magic was not strong enough, and I would end up sitting in a sloppy puddle.  But I could do it. I could escape the rain. Who needs blue skies when you can’t get wet? Even still when I was younger, I could always see the blue, even in the darkest winter skies.  I could see through the clouds and beyond.  I could fly too – only for short distances, but I could step out of my window and will myself over the trees, across town, and spend time with flocks of geese and coveys of pigeons.  Once when I was a bit older, my mother asked me the score of a basketball game – we were huge college basketball fans in my house – lots of folks are in southern Ohio.  I told her the Bearcats won 87-72 and recalled the second half highlights as they played out in my head in relative detail.  Later that day as we rode to the barn, she flipped on local radio only to find out the game was just beginning. The Bearcats won the game 87-72 in a style just as I described.  None of us found this entirely strange.

Somewhere along the way I lost the ability to conjure. No longer could I fly across my street or predict the future.  I even got wet when it rained.  I did, however, develop other powers. I could understand politics, realize societal expectations, differentiate between an institution and a person.  I could send and reply to emails. I understood who “the man” was.  Later, I could even summon police officers, conjure judges, parole officers, and rehab facilities.  And at the drop of a hat, I could imagine death, my death.

There was one time, I lay on the top of a hill overlooking the horse pasture. It was a bright, sunny summer Ohio day.  The air was thick, and the corn was about knee-high, as it should be. Despite the sunny forecast, I was able to see rain on the horizon and thunderheads closing in. I was bound to get wet. Of course, I didn’t have an umbrella. Grasshoppers bounced from blade to blade above me and chiggers began to work their way under my skin. I wrapped my lips around the barrel of a twelve-gauge shotgun. And wept.

Summer squalls can come in quick and unexpected in Ohio.  One minute the air will be so thick you could cut it with a butter knife, and the next you will be running for cover and puddles will appear so deep catfish could wallow in them.  You know what they always say, “If you don’t like the weather, wait five minutes.”  This is true, except when it is not.  As a child, I dreamed of catching catfish in those puddles on the street. I dreamed of the river flooding so high I could catch catfish from my bedroom window.  But those sorts of things never happened here, except when they did.  Two of the older Benton boys, the ones who worked in those fancy offices uptown, once borrowed our canoe to paddle to work. The entire neighborhood was flooded. I could see them wearing loafers and cheap two-piece suits, paddling that Old Town down Riverside and across Market.  I could almost picture huge catfish, brought up from the river’s depths swimming past Ben Franklin’s and over the steps of Gold Miner Inn as the boys tried to tiptoe out of the canoe and into the office. One of the boys never came back. Neither did our canoe.

Each summer we would spend weeks canoeing and camping on lakes between Minnesota and Canada.  It often rained there.  I remember once, sitting on a huge rock that dropped precipitously down to a dark lake.  The sky was blue, but on the horizon a clear line of gray delineated here from there.  I watched as a sheet of rain moved across the sky.  It was sunny and dry here. But there it was wet and dark.  I waited for the line to move closer. I thought maybe once again I could dodge the raindrops.  But I didn’t dare test fate. At the last minute, I darted to the safety of my tent and a good book.  I wondered what my grandma would say.

My grandma owned a little yellow cottage overlooking Lake Cumberland in Kentucky.  She had this pontoon boat she would drive out into little coves, set anchor, and watch the sun move across the sky as she lounged on pool noodles and sipped cheap, ice-cold beer.  One bright, humid, summer day, I took a girlfriend to visit my grandma and aunt at the little cottage. Grandma hadn’t been out on the pontoon in years because she was too old and too weak to get in and out of the boat by herself.  This time she went with us, though. We pulled into a little cove, activated the pool noodles, and commenced lounging and sipping.  It was glorious, until it wasn’t.  The squall came in quicker than anyone could imagine. The next thing we knew we were running that pontoon as fast as we could trying to beat the thunderheads barreling down on us.  Only we didn’t make it.  Lightning struck all around us. The thunder was so loud it echoed through our ears. Rain pelted us from all sides. And the wind – the wind was so strong it picked up that little pontoon boat and nearly threw us across the lake.  Waves the size of the Pacific crashed over the sides of the boat as she rocked back and forth.  I started making plans for what I would do when we capsized. Who would I choose to save and swim ashore? I couldn’t help everyone.  I looked over at my girlfriend who was ghost white and gripping her seat, then my aunt who was squinting through the wind and rain with her curly hair running wild as she clutched the steering wheel of the boat.   I turned to look at Grandma. She had the biggest smile I had ever seen, and she was laughing – no, giggling – like a schoolgirl.  If we capsized, I was going to save Grandma.

One fall when I was trying to woo my wife, I took her up on a multiday camping trip to some Alpine lakes in the eastern Sierra. I don’t know why I thought she would be captivated by the thought of shitting in a hole and sleeping with me and two dogs in a two-person tent at ten thousand feet elevation in October.  Around four o’clock it began to rain, but not just any type of rain – this was sleet or grovel as I have come to know it.  It pelted the tent and we cuddled inside. In my mind, wooing involved catching fish – or at least that is how I rationalized it. So, I grabbed my rod and stepped out to the lake.  I was freezing. Grovel was hitting me sideways and my guides were freezing up on every other cast. My wife was huddled with the dogs inside, shivering under two sleeping bags.  I caught more golden trout in that hour than I had in my entire life.  It was magical.  I returned to the tent cold, tired, and wet.  I always forget an umbrella.  I told her I was going to change clothes and go to sleep.  “Not before you fix dinner,” she chided.  Thus is the way with wooing – and fishing.

Last spring the rain brought a tornado.  Huge droplets pelted the metal roof as the wind threw branches and dirt against the cabin’s logs.  It was late, maybe midnight.  The winds circled above, bending trees at their ankles, and throwing branches across the pasture in front.  The creeks’ waters began to rise with that unmistakable sound of limestone tumbling down the creek bed and crashing into shale ledges. Then it sounded like a train was barreling down on me from the sky.  The walls of the cabin flexed, then lifted and floated in suspension if only for a moment. I stood up from my chair, grabbed my whiskey, and stormed outside to the rocking chair on the porch. “Come and get me,” I yelled. “I am ready for you, you bastard.” And then the train passed. I finished my whiskey and went to bed.

One neighbor lost her roof and another her entire barn.  I picked up branches from the driveway the next day and nursed a hangover.  Later I helped that neighbor move her horses into our barn.

I live in California now where there hasn’t been a thunderstorm in twelve centuries.  We transport rain from north to south and east to west.  People get shot over rain here too – for different reasons of course.  Steelhead on the coast are dying by the thousands because we hoard whatever rain we can behind hundreds of feet of concrete.  They say there is not enough water to go around.  Some friends of mine who live near Salinas are moving back to Ohio.  “It is not sustainable,” they say, “this drought will never end. California is destined to become nothing but desert.”  They want to get out before their house burns down and they can’t sell it. It rains on average forty-three inches per year in southern Ohio.  By contrast, Southern California received fifteen inches last year.  We need the rain. It stops people from moving – and fires.

I was looking up at the sky the other day as emails pinged across my screen and life. The mountains were dark and grey. It was raining there. An invitation to a meeting. A preparatory meeting for another upcoming meeting.  An invitation to fill out a survey. A reminder to contribute to this year’s report.  A daily briefing.  An orientation for a committee.  A Zoom link. A webinar.  A panicked question from a colleague. A panicked question from a student.  An update on last year’s report.  Another reminder. Another meeting.  Above me clouds drifted past patches of blue.  The cold wind pushed the grey from the mountains ever closer.  I’ll take a hike I thought, maybe Stoddard peak.  I’ll watch the rain move in and maybe there will be enough blue in the sky to stich a pair of britches.

Ned Weidner is a fisherman and community college professor who spends his time between Ohio and California.