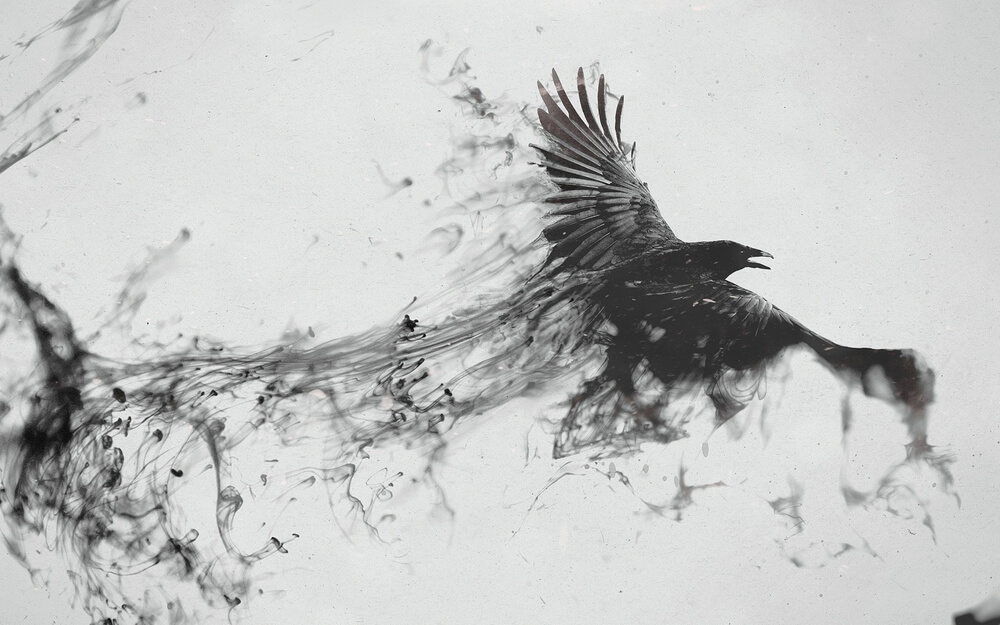 The Tale of a Fat Ugly Crow on a May Afternoon

In front of my living room window,

on a splendid May afternoon, warm and sunny,

a fat crow rapturously caws over its good fortune.

I watch in morbid fascination

as it tears apart a rodent.

It studiously picks away at that small, unfortunate animal,

The next morning, not a morsel left on the street,

not even a bloodstain, I checked.

ripping away the guts and sinew

of a once proud sovereign nation.

Soon it too will be left without a morsel

while the world watches from the window.

“Poetry arrived in search of me. I don’t know, I don’t know where it came from, from winter or a river.“ — Pablo Neruda

I went back to my old neighborhood,

wrote about the cracked skylight in the too-warm kitchen,

hanging next to crinkled appointment cards under thumbtacks,

and recalled my immigrant mother serving lunch to Mr. Cooper,

a crusty handyman in overalls,

her thick deviled egg on challah and a fat slice of marble pound cake.

I wrote about golden poppies trailing over the splintery fence,

the glorious lilac tree in the backyard,

Mrs. Fishel spying from behind her living room drapes,

and Mrs. Hetrova, our piano teacher, who came on Wednesdays,

with her pillbox hat where she hid her money from hooligans.

I wrote of “going downtown” on the 5 Fulton

with my mother and sister,

for school shopping at the Emporium on Market St.,

then tuna on toast at Blum’s and sharing a piece of crunch cake.

And it all came flowing back to me,

the fog shroud, the briny smells, the eucalyptus trees,

rolling down and down Lindley Meadow with my cousins.

And when I journeyed “home,”

it was as if I viewed my life through a new prism,

but I couldn’t stop the sad memories from showing up too,

stories I did not want to dredge up

but could not leave untended or unwritten.

I had found my voice.

It Began with an Ordinary Tuesday

in homage to Wislawa Szymborska’s, “The Sky”

It begins with the sky,

on a lazy, ordinary, August day with errands to do on my list,

but the sun strange, reluctant, foreboding

obscured in thick smoky haze drifting from the Sierra fires

I should begin with how I feel, a malaise encircling me,

though nothing really wrong

that I could call out until I think about it,

I should begin with what is bugging me:

the Delta variant, the shitty state of our world,

but if I dig deep, it is something else entirely—

memories niggling from years ago

I should really begin with the Afghani evacuation;

my swelling fears for the girls and women,

their fate, their bleak future,

And even when I get to the senior center

to register, a simple, mundane task,

first time there in eighteen months because of Covid,

I am taken aback by a new homeless encampment

entrenched on the lawn in front of the building,

but I am lost, alone, bothered,

and annoyed by the new Covid protocols

It began with just the sky, on an ordinary Tuesday,

I wish it were only the sky.

Joanne Jagoda is a longtime resident of the Oakland hills. After retiring in 2009, one inspiring workshop, Lakeshore Writers, launched Joanne on an unexpected writing trajectory. Her short stories, poetry and creative nonfiction have appeared on-line and in numerous print anthologies including, The Write Launch, Burningword Literary Journal, Third Harvest, Snapdragon, A Journal of Art and Healing, Quillkeepers Press, The Awakenings Review, The Deronda Review, Dreamers Magazine, Passager, Better After 50, and Still You, Poems of Illness and Healing. Joanne received a Pushcart Prize nomination and has won a number of contests including first place in the 2022 Gemini Open contest. She continues taking Bay Area writing workshops enjoys Zumba on-zoom, and spoiling her seven grandchildren who call her Savta. Joanne’s first book of poetry My Runaway Hourglass, conceived while she was home sheltering-in-place, was published in summer of 2020 (Poetica Publications).