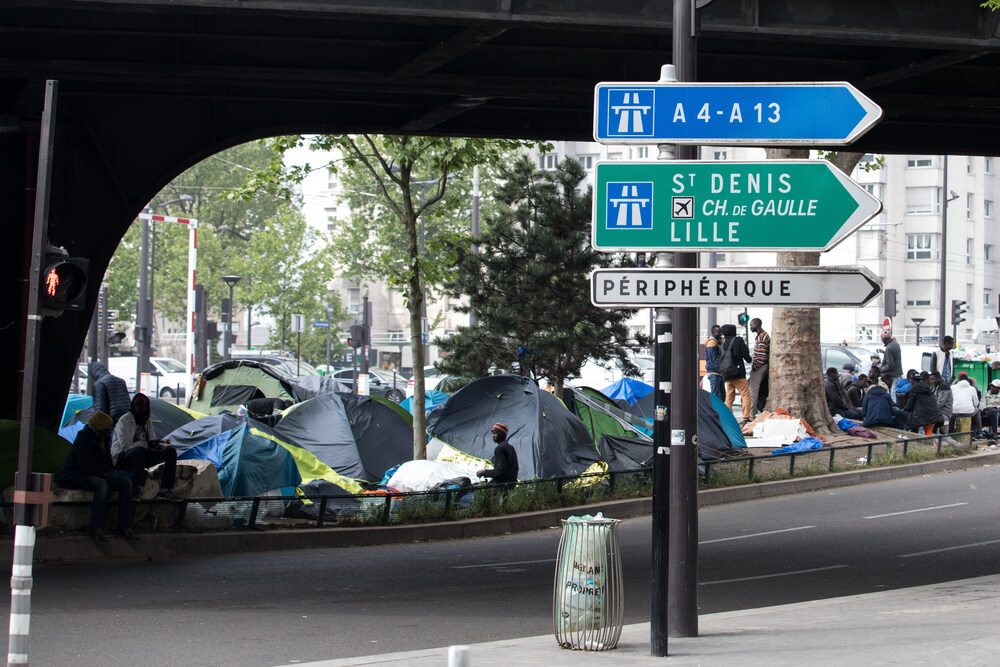 Photo by Harriet Hadfield on Shutterstock

The terrace of a chain restaurant on the Champs-Elysées, Paris.

(On a dark, drawn curtain, a projector beams the following paragraph for one minute as a stagehand, obscured in black, carries a white hoop stage right followed by a spotlight.)

He positioned the center of France at the pillory of the condemned, at the base of the twelve steps of the Portal of the Saints of Notre-Dame, the cornerstone of which was not laid until 1162. Its construction is neverending.

LE POINT ZÉRO sits stage right, in front of the curtain, and is brightly illuminated.

Upstage, DINERS, marionettes in a variety of nineteenth-century national dress are posed at round terrace tables. They are separated by brass pillars for velvet ropes; instead of ropes, there are chains. A sound machine plays sounds of silverware scraping, glasses ting-a-linging, and merry conversation. At stage left, WELL-HEELED WOMAN is looking at an oversized map of Paris. WAITER watches the crowd, standing in the middle of the DINERS.

(Enter stage right, running. He stops and picks up LE POINT ZÉRO and its bright spotlight.)

Come back with that purse, you thieving whore of Egypt!

UNNAMED WOMAN trips, falling to the sidewalk; UNNAMED MAN kicks her belly. LE POINT ZÉRO is in his hand, its spotlight strobing.

(Enter stage right, TRIO OF GUARDS, running and tripping over each other.)

(Japanese: Pronounced nante kotta, and roughly translated as “What da...?”)

WELL-HEELED WOMAN drops her map and her shopping bag to the ground. Her outfit is perfectly pressed and subtly designer. She stands with her eyes glazed over and her mouth agape. She is going catatonic.

I curse your father, your mother, AND your unborn son!

TRIO OF GUARDS exit stage right, the smallest of the trio dragging LOUIS VUITTON PURSE behind him. UNNAMED MAN glares at UNNAMED WOMAN.

(Throws LE POINT ZÉRO at UNNAMED WOMAN. It bounces into the audience, followed by the spotlight’s glare.)

A curse from a curse!

UNNAMED MAN kicks her face, knocking UNNAMED WOMAN into WELL-HEELED WOMAN. UNNAMED WOMAN scrambles to her feet, grabs the small shopping bag from the parfumerie Guerlain, and runs off, stage left. WAITER awkwardly crawls over the chain and grabs UNNAMED MAN by the arm, spinning him to face his question:

Sir, please, how could you?

Why wouldn’t I? It is my job to secure my client and his possessions.

(Calling into the audience.)

Miss! May I help you?

Hey, Jacques. I’ll be back. I’m going to drop her off at the embassy. Paris Syndrome...

Marianne paced as she walked around the space praying. It was a lull between the movements, so she took a moment to stretch her legs. Fourteen years ago and a month, she did not remember this being so hard.

“Mama!” Marianne ran back to her daughter’s side and squatted down next to her. Tucking her skirts between her legs, she whispered, “I’m here, baby. It’s like a wave. Remember that time we went to the ocean to visit my family in Spain? The waves came in and out. In and out… that’s right, churumbel.”

Marianne had assisted in plenty of other births before, of course. The women of the community gathered together with each new growing belly to discuss a plan. To this point, she had only been a part of the cleaning crew, though. Looking around, she was so pleased that they all worked together so well. At least the floor was clean, even though the wintery wind whipped through the newly laundered flaps of the tent. With the chill, it swept in the dust and diesel from the highway above.

Ducking her head between the flaps, an elderly woman asked, “How’s she doing, Marianne? Should I pass by more often now?”

Marianne was relieved to see the furrowed old face with gray hairs hanging from her scarf and chin through the colorful slit. “Oh, thank you, deblamia!” The woman was a goddess—and today she was Marianne’s and her daughter’s. One of the oldest women in the camp, she had seen every situation.

Another crest of pain appeared, and the old woman hobbled into the tent. Grasping the young mother’s hand, she reminded her, “You can do this.”

Only the whites of her eyes were seen as she chanted, “Nanay… nanay… nanay…”

Turning back, the crone whispered, “It’s soon, Marianne. Right when women say they can’t, suddenly, they do. Go run to fetch my helpers, please. We’ve got time—it’s her first. But hurry.” The wizened woman returned to the writhing one and blew a soft stream of her breath onto her face encouraging her to breathe.

Marianne was glad for the time alone. It had been hours of howling already. As she marched to the other side of the camp beyond the overpass, she was alone with her thoughts—ruing.

Not bothering to keep her thoughts to herself, she huffed, “That monk—that Fitzsimmons? He is the reason why we suffer. They hate us because he didn’t listen. He thought we wandered for the sins of both brothers Cain and Abel.” Marianne hastened her pace.

“The irony. Heh, I’m French now, gadjos.” Marianne raised her voice to hear herself think over the din of traffic of the perpetual Parisian rush hour on the Periph’ above her. “The irony,” she shouted, “is that I found out about this inadequate monk when I was waiting for that poor girl struggling in a tent—instead of a hospital. Like a beast instead of a human being.”

Marianne fell to her knees. “Lord, I have accepted your Son as my Savior. I pray. Why, after this child of mine was delivered after a swift kick in the stomach by some sadistic Saud, should this poor thing suffer and maybe die if she bleeds? The only thing that came of that situation was seeing the light. In the fancy shopping bag that day was nothing but a book about medieval Paris, including a little snippet about us Caló. It seems nothing has changed.

“Except us…Maybe it is our fate to absorb all the light and be the darkness. It makes me think our origin story is correct, and not yours, dear Lord. Please pardon my sin of blasphemy, but I question your reasons. Please help me, Lord,” she whispered as her body quaked to the ground.

Her nose in a puddle, Marianne raised herself to her task. Unabated, she stormed through the camp. “The hatred we get from this misunderstanding on Crete. I have cousins who go to Crete. They say there are bad winds there in the winter, too.”

Popping her head into another tent, she merrily announced, “Ladies, it’s time!”

Jumping up, a woman draped a shawl over her breast. “Hey, Marianne. Run next door and ask for the medical kit. Pispamos from the new pharmacy up there. I’ll finish up here real quick.”

“Chorizo,” Marianne teased, secretly thankful for the theft. With no hospital, the least they could nick was some Paracetamol for pain, or worse, fever. Within a few minutes, a trio of women hustled back to the other side of the camp. One had just unlocked a baby from his meal and left him behind screaming before he was popped on another woman’s waiting breast. Another had the medical kit at the ready having overheard Marianne’s forceful announcement. Along the way, they gathered another.

This woman had managed to find work cleaning a gynecological clinic. So, she had borrowed—and returned—the textbooks. Before she was fired, she had also “borrowed” heavier drugs like Tranexamic acid that slowed bleeding or antiseptics for the cleanliness of needing to be cut, as the textbooks suggest sometimes. These were the only advancements in recent years.

Their skirts swished and jingled as they ran back to Marianne’s daughter. The traffic had started to swell with a crescendo of impatient honking above their heads as they entered the tent. From inside, a hearty roar signaled that they had arrived just in time. They each prayed that they would not need any of the tools they dragged with them through the pathways of the secret passageways under Le Periph.’

N.M. Campbell is an expatriated antiquarian bookseller living in the Netherlands. The author lives in an old house surrounded by a few antiques and a library of books wafting vanilla and lignin. A fellow world-traveller, a Maine Coon cat, permits people to live there.