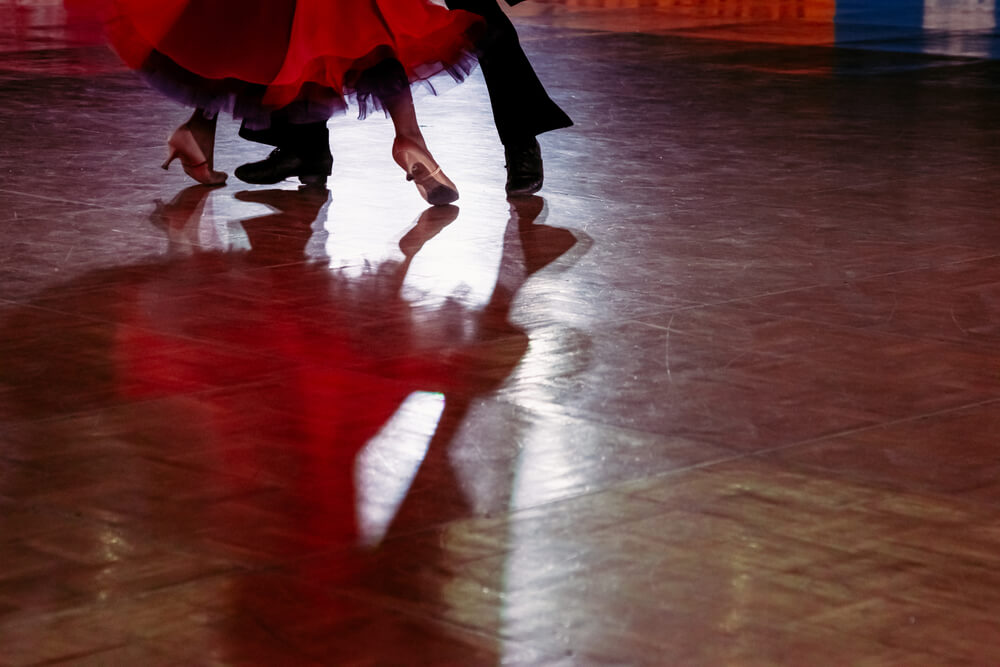 My father, George Katz, was drafted into the U.S. military in 1942. Life in the military began in Roosevelt Field, Long Island, where he received a physical examination. The exam revealed flat feet and a high IQ. Owing to the high IQ, he was not sent overseas for combat.

Rather, he stayed on the mainland in the U.S. Army Air Corps (today the Air Force) working on airplanes.

My father talked about those days as if he was sent on a free trip to Disneyland. He’d grown up during the great depression and knew only poverty. The family moved whenever the rent was due. By the time my father was drafted, the family was living in a small apartment in the Brownsville section of Brooklyn, New York. From this vantage point, traveling around the U.S. meant seeing the world, all-you-can-eat meals, free cigarettes and ballroom dance lessons. Yes, you heard right. Dance lessons were provided to the off-duty GIs on the town.

In his last eleven months in the military, my father was stationed in Palmdale, California, at Murloch Air Force Base, today Edwards Air Force Base. One of his GI friends had a car, so when off duty they drove four hours to L.A. to frequent the Hollywood dance clubs. According to my father, there were professional dancers at the clubs. He was spotted by one as having potential. So, in spite of being flat-footed, he began his dancing life, a gift he’d carry until his legs no longer worked at age eighty-five.

My father was fond of his ballroom dance teacher, but “one day she left and didn’t come back.” Her disappearance from the scene made him sad and reflective. He’d heard her husband had been killed in the war so she went back home to the Midwest.

World War II ended on September 2, 1945, and in April 1946, my father was honorably discharged like a slingshot back to Brooklyn. I don’t think he was doing very much. But he was going to dance, I know, because that’s how he met my mother.

My mother, Sydell Katz, grew up in a railroad-style row house in East New York, only slightly more upscale than my father’s Brownsville neighborhood. My mother was a Bobby Soxer and a life-long fan of Frank Sinatra. During the war, when the boys were gone, she hung around the Paramount waiting to catch a glimpse of Sinatra, the object of young women’s attention at the time. Her parents were pushing her to date a neighborhood man who was going to be a doctor. She didn’t want to go out with him, she told me, claiming he was very “ugly.” Instead, she went with her friend Hoshie to the dance hall on Church Avenue in downtown Brooklyn.

That night at the club, my father approached my mother.

My mother thought that was a line, but said, “Yes.”

She liked him. Not classy, but funny, she later told me sitting in her wheelchair at the Jewish Rehab in L.A. in 2017. She started dating my father in spite of his possibly Runyonesque comportment. My father’s credibility improved after riding up an elevator to meet his Sydell look-alike cousin. “Are you related to Annie,” asked a passenger who lived in the building.

As a young girl, I loved to dance with my father. We spent many vacations in the Catskill Mountains in upstate N.Y., also known as the “Borsht Belt,” since at its inception was the Jewish vacation spot for New Yorkers. My mother would spend hours with a fine thin comb with a long pointed end teasing up her platinum blond hair before dinner, so my rearing-to-dance father would take me to pre-dinner cocktail parties as a stand-in dance partner. Besides the delicious “pigs in blankets,” mini egg rolls and Shirley Temples, there was always a live three- or four- man band playing familiar Steve Lawrence and Eydie Gormé Bossa nova tunes and the like. My father would lead me through a cha-cha. Forward step cha-cha-cha then back step cha-cha-cha.

Throughout my life, my father would take over the dance floor with his freestyle Charleston moves, which must have predated his formal training. He’d bend his knees, stand on his toes, then swing his knees in and out while switching arms over his knees. Loving the spotlight, he did this at most parties I attended with him, including my Sweet Sixteen.

Yet, he had competition on the dance floor. My mother’s younger red-headed brother, Jerry, was a great swing, and he too would take over the floor with his wild and fast Jitterbugs and Lindy Hops. Later at my wedding, my then father-in-law to be referred to my family as the “Dancing Katz’s.” And many years after that, at my son’s bar mitzvah, my then mother-in-law, a proper British woman, shy and not prone to a scene, thought she’d join the show once and for all after all these years, so she waved her arms above her head like my father and shimmied up in her crimson, raw-silk dinner suit to light a birthday candle.

Although my mother was a great dance partner for her George Katz during their almost seventy years of marriage, and although my uncle Jerry danced his entire life all over Manhattan, my father was the most proficient dancer. At 5’8” and broad build, he bore no resemblance to Fred Astaire except for his lack of hair. He was light on his size-10 feet and knew how to lead a woman with the right pressure through turns and pivots. His face and demeanor exuded a true love for dance. I only realized this later in life when I too became a ballroom dancer.

My dance life began as a child in the Borsht Belt but became official in 2014. I was recently divorced and working and living in Manhattan. Not in the best of spirits. A friend told me he was taking ballroom dance lessons so I got it in my head to start. Like in the movie, “Shall We Dance,” I took the transformative walk up the stairs of an Arthur Murray Dance Studio. First, I was assigned a young man who began teaching me entry level waltz and tango. A few weeks later, I met the manager, Ricardo Sopin, a striking Haitian man and champion American rhythm dancer. I took one lesson with him and knew I’d found my instructor. He was a no mercy “take-no-prisoners” teacher banging my shoulders down and stretching my head up literally with his two hands. That was just the beginning of a wonderful journey.

Between 2014 and 2021 I became an avid and competitive ballroom dancer. Ricardo became my competitive dance partner. Like my father, Ricardo came from poverty. Unlike the Eastern European dancers occupying the world of ballroom dance today who might start learning at age four, Ricardo began formal training at nineteen. He was in college and going to the clubs at night. He noticed the guys who danced “got the girls” and wanted a “piece of this.” So, he took his own lessons and taught to pay for more. Then, “voila” as Ricardo says, he was discovered. He was sent to Europe to learn many styles of ballroom taught by world-class instructors. It wasn’t easy being called “monkey” by his German dance teacher or told “blacks can’t do ballroom.” Nevertheless, he became an American rhythm dance champion.

When my parents were elderly living in a senior residence in California, I asked Ricardo if he would dance with me in a competition in Irvine, California, so my parents could watch us. I knew there wouldn't be many other chances. My sister brought my wheelchair- and walker-bound parents to the ballroom. We gave them seats off the dance floor. Ricardo and I were dancing American rhythm that day. Ricardo was dressed in slim-fitting black pants, a tight see-through long top with clear stones encasing the deeply dropped neckline and black leather rhythm shoes with a slightly higher heel than men’s street shoes. He had a number pinned on his back for identification to the judges. I was wearing a dress entirely covered with multi-colored crystals, which was so heavy I had to pay excess airline baggage charges. If the dress wasn’t decorated enough, I had matching crystal earrings, necklace and a hairpiece. My hair was pulled up with a tiny rubber band and numerous bobby pins then reinforced with “got2B glued” hairspray in the ballroom dancer fashion. We commenced with American style cha-cha, light years away from the one I did with my father in the Catskills, then danced rumba and East Coast Swing, sharing the dance floor with other crystal-clad dance couples.

When we were done, I darted over to my parents. “That man can dance,” he said of Ricardo.

In his last years, my father took a keen interest in my dance like no other activity I’d engaged in throughout my life. When I’d visit, he’d inquire, “Where you going next?” knowing I had danced in Barcelona, Florida, Las Vegas, New York, and South Carolina over the past years. And the better question, “How much money did you win?”

Ricardo and I named the pivot turn in our Fox Trot “the George Katz turn.” This was the turn where my father placed his cheek close to his dance partners’. He’d hold her hand with ample pressure to lead and at the same time exude immense feeling for the music. Sometimes Ricardo and I do a forward and back long-out-of-style cha-cha from my childhood. From where I am today and something I’d known most my life, I’d have to say this about my father: the man could dance.

Alyssa Katz is an emerging creative writer of non-fiction and poetry.