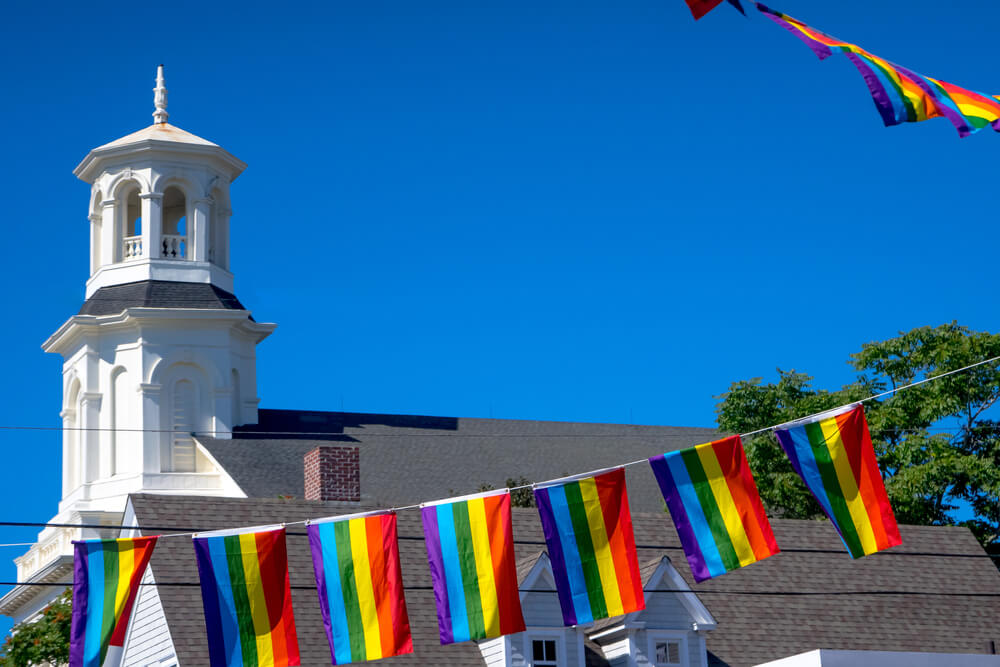 If you walk the West End on Commercial Street in Provincetown, inevitably you’ll pass Joe’s Coffee and Café. Early morning, there’s a line out the side door for takeout and inside, the structure that had originally been designed as a bank, has seating throughout. Outside, in front, are a number of wrought iron tables painted wet-black, some under blue umbrellas for shade. At the western most corner, close to a dirt drive and bike rack, is a large, round wooden table, weathered Cape-Cod grey. Sitting there as casual as if she owned the terrace, you’d find Carmen.

For more than a decade, Provincetown has become my second home. As a guest, I stay with friends I initially met as gallery clients, back when I was working in the New York City fine art scene. Originally they took possession of the house as a vacation retreat. Within a few years, they abandoned the suburbs and moved permanently to the Cape. Their two oldest children, both boys, had graduated high school and their daughter, who would be entering as a freshman, took to the idea of leaving Westchester, New York, for this Massachusetts port town. The first time I was invited to infiltrate their home was in summer of 2006. My father was reaching the end of his days after a four-and-a-half-year stubborn fight against the death rattle. Doug and Metta, still residing nine months of the year in Westchester, offered me five days in Ptown away from the impending reality of Dad’s dying. That first trip, I did little beyond reading paperbacks on their wooden deck and sharing meals with the family. I came home refreshed and thankful. My friendship with my hosts grew from great affection to extended family. At least from my side.

As the summers passed, my annual jaunts became more comfortable and anticipated. I don’t deny that I lost sight of boundaries with the family, asking that they let me know when it was time for me to leave: a very unfair imposition to put on generous people. Somehow, I still was invited back each year.

In the summer of 2015, I took seriously my commitment to writing, having been asked to pen a spec script for a TV show. Though there were twenty-one rewrites and eventually I was bought out of the project, I wrote the majority of it while up in Provincetown.

Simultaneously, I was writing nonfiction short stories and full-length plays. Around 4 p.m. each day, I would take a bike from my hosts’ garage and peddle down to Joe’s. If vacant, I would take a seat near the round table to write. There seemed to be a familiar group that congregated there each day. Primarily but not exclusive to being gay men, they would gather in the afternoons to knit. Though there was no appointed leader, Carmen seemed to hold court. Or maybe that was just my perception.

I’m not sure of Carmen’s age. A senior, without a doubt. Most of the knitting club members were of a certain era: not the under thirty-year-old, gay-scene vacationers. Carmen wore silver hair in soft waves framing her cheeks, pink lipstick, and beautiful, curved earrings in diamonds and white gold. Sometimes adding a brightly colored jacket if there was wind, and always with a small, Tiffany-blue purse.

She couldn’t quite figure me out. She’d often stare at me, smile and nod her head. Though I was working, I would eavesdrop on their conversations. There was a small sense of unoffensive gossip, and a lot of talk of local news. A yenta of non-Jewish persuasion, Carmen couldn’t help herself and began chatting with me, soon offering an invitation to join their table. I told her I didn’t knit and she said that made no difference to anyone there. From then on, I got very little writing done at the four o’clock hour. I developed some long-term friendships from the group and an unexpected connection to Carmen.

Beyond the knitting club hours, some of the boys helped to look after Carmen and her husband, Al. Carmen is a two-time cancer survivor. Still making regular visits to the lower Cape for continuing treatment, boys took turns driving her down as well as sometimes shopping for groceries and performing other errands to help when needed. But the main obligation we all took seriously was keeping her company and engaged. In the dawn hours, when I sometimes would bike the circumference of the town, I would pass by Carmen’s driveway. She’d be sitting in a deck chair, washing in the sun on her small porch, overlooking Commercial Street and the bay. She’d wave and call my name as I passed by.

There were two seasons in a row I took advantage of extended stays in Provincetown. Heading up as early as June, which was usually sweater weather, traveling back to NYC before July 4th, when Ptown’s “season” really takes off. Then returning toward the end of August, before Labor Day weekend, so I could get a visual taste of the hordes of gay men. But it is the weeks after high season in Provincetown I love most. One rainless autumn, I stayed through mid-October.

Carmen and Al have a small, one bedroom apartment above an antique store on Commercial Street. Wednesday evening was poker night at the condo. Carmen and Al spent about five months of the year in Provincetown before returning to their Connecticut home near Hartford for the colder months. Come winter, Provincetown’s population declines to under 3,000 locals.

I’m not really a “joiner.” I like the idea of being invited, but I live a single, social-less life. This wasn’t true in my youth, as anyone who knew me back then can testify. Sometime after an epic disaster of a relationship where my heart and confidence were shattered, I slowly began to withdraw from companionship. There were a few passion-based affairs not worthy of details and a final, long distance relationship. When that unceremoniously ended, I never coupled again. It’s not for everybody (the solitary life), I understand. But I’ve become one of those persons who would rather be by myself than in a relationship for the sake of not being alone. It’s a danger I may regret when I’m old.

Carmen always kept a warm smile on her face. But behind it lay a sadness unerasable that silently permeated my curiosity. In her living room, there is a photograph of a young, handsome man. Carmen and Al’s son. He had been killed in a car accident decades before. There is no repairing a heart from losing a child. There is only getting by and a search for some semblance of quality to life. Years before we met, Carmen made the conscious choice to come to Provincetown, specifically because of the population of gay men. Stereotypical as it may sound, there was a gregarious and contagious joy in the men who came to Provincetown and this was what she wanted to surround herself with. When Carmen told her Connecticut society, some literally said, “That’s where the fags all go.” She told anyone who spoke against gay people to either shut up or not be in her life. And she lost friends because of it. Without regret, the time she spent in Provincetown saved her.

This is ridiculous to point out, but I’ll say it anyway. Like any minority, we’re not all the same. But the open invitation Carmen and Al received in Provincetown by gay men of all ages was true and genuine and without political judgement.

Carmen and Al aren’t the only survivors who came to the edge of Cape Cod. Over the years, I discovered more than occasional souls who searched to find another way after a tragedy. Provincetown is a longtime home to writers and artists, rich vacationers and generations of Portuguese fisherman. And like a few other hard-to-access corners of America, gay populations came to be completely free. Provincetown seems to be a surviving relic of the mostly obsolete holiday meccas for gay men. Maybe it’s no longer necessary for gay culture to thrive in the outermost resorts. It may once have been perceived as self-segregation in a privileged ghetto, but I don’t apologize for loving the excess and acceptance. And I understand why Carmen threw herself in the center of that world.

I haven’t been back to Provincetown in two years. I worked all of one summer in the city, and the next spring COVID-19 hit. During that time, Joe’s was sold. Though I stay in touch with a few Provincetown regulars, I haven’t spoken to Carmen. I don’t know that I’ll see her again. If I don’t, I’ll always visualize her inquisitive gaze and smile when she first saw and invited me into her sanctum. It changed my relationship to Provincetown as significantly as the warmth and inclusion my hosts have shown me. Where Doug and Metta have become extended family, Carmen is a memorized keepsake as iconic as the lighthouses and dunes that define the western shores on the northern tip of Cape Cod. Carmen. The smile of survival.

Andrew has written several short stories (published work at andrewsarewitz.com) as well as scripts for various media. Mr. Sarewitz is a recipient of 2021 City Artists Corp Grant for Writing. His play, Madame Andrèe (based on the life of Nancy Wake, The White Mouse) garnered First Prize from Stage to Screen New Playwrights in San Jose, CA; produced with a multicultural cast and crew. His play Five Men, Four Beds advanced to the Second Round at the 2019 Austin Film Festival Competition. Andrew’s spec script, The White House is a Finalist in the 2019 Pitch Now Screenplay Competition.