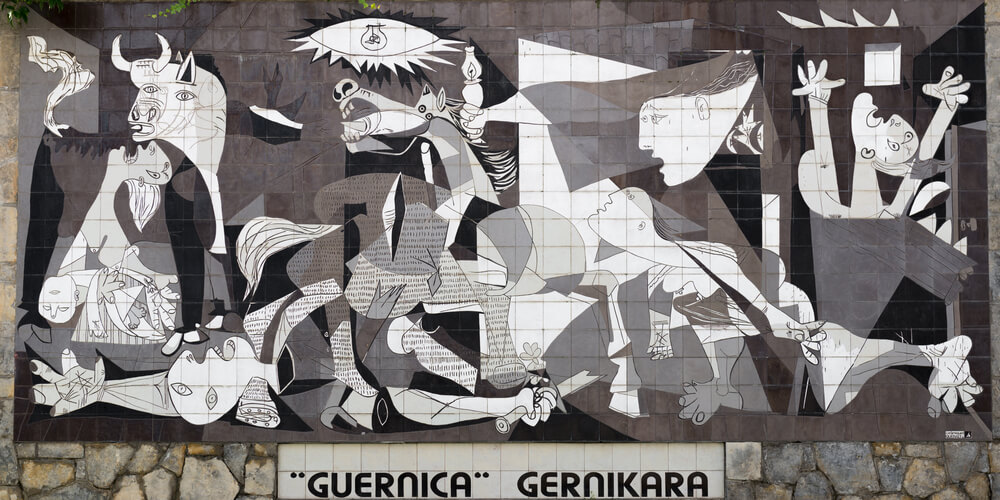 An aspirational God is manifest in an infant’s birth, the sun's warmth, a shoreline’s rippling waves. It appeals to conscience, evokes compassion, succumbs to the primal force of base behavior. Order and chaos, hope and longing, love and indifference recycle themselves. We can't break the stalemate, no matter our creed. Pablo Picasso’s overt and subtle images in Guernica confirm this. A 1938 Nazi bombing raid’s intrusion in the Spanish Civil War fueled his outraged grayscale painting of “my horror at the military caste which is now plundering Spain into an ocean of misery and death.” Bull and horse symbolize aggression and passivity, human hands seek heaven’s help, a harlequin sows chaos.

My father said salvation lies in human hands. His World War II roles on the Merchant Marine’s harrowing Atlantic crossings and at organizing a seamen's union on Brooklyn’s Red Hook docks made his claim credible. I yearned to grow old to go south in 1964 for civil rights as a Freedom Summer volunteer. That lay beyond me at age eleven. Prepare yourself in school for when your leading time arrives, Dad urged. He was an atheist, Mom a lapsed Catholic. His self-sufficient ways, not her dependent prayer, intrigued me.

Dad espoused “a real people’s movement” on our Wednesday night train rides to the old Madison Square Garden’s hockey games after homework. He painted Paul Robeson word portraits of the sports, stage, and song star blacklisted for outspoken antiracism. “I shall take my voice wherever there are those who want to hear the melody of freedom or the words that might inspire hope and courage in the face of fear. My weapons are peaceful,” Robeson, steadfast though ruined, declared. “For it is only by peace that peace shall be attained.”

When he said in 1938 in the aftermath of the bombing in Spain that “false notions of national and racial superiority challenge the scientist, the writer, the artist,” Robeson could have been speaking to me.

Robeson, a college football All-American, acclaimed as Othello on Broadway and on global concert tours, was lynched in effigy at a labor rally and outdoor performance in Peekskill, New York. The FBI surveilled him for decrying African colonialism and Cold War confrontation. His yearly income crashed from $150,000 to $3,000 ($1,800,000 to $35,000 today, says the Bureau of Labor Statistics). Robeson sought coexistence, sang in the Soviet Union, joined the U.S. Communist Party. His heroism grew crystal clear years on when I interviewed his son, author Paul Robeson Jr., and Bancroft Prize-winning biographer, Martin Duberman, on radio.

Dad one night in the car confided that he, too, had been a party member. He swore me to secrecy as I, frightened, wondered why he'd disclosed this – perhaps to impress me and instill moral courage.

My mother’s tales of French worker priests convinced me that the sacred and secular could blend to our benefit. “Let us go forth to lead the land we love, asking His blessing and His help, but knowing on Earth that God’s work must truly be our own,” President Kennedy's Inaugural Address concluded.

Converting to Judaism made me aware of universal values among world religions, but why won’t we uphold them? Why must distinct faiths dominate? Why must greed prevail as the pandemic compounds poverty? May heathen, pagan, infidel and crusade be some day struck from parlance. May the fear that cloaks itself as hate yield to integrity and love.

“True insight does not issue from specialized knowledge, from membership in coteries from doctrines or dogmas,” a Zen tenet says, “but from the preconscious intuitions of one's whole being, from one's own code.” Facades shield people afraid to seem weak physically, emotionally, financially to others. Accepting what is seems safer than striving for love-driven political and personal conduct. A paradigm shift appears merely for a moment in the aftermath of a natural disaster.

Do I hear derisive godly laughter?

God gives us free will to perceive the divine spark in others, but people kept to themselves before our enforced isolation. Stereotypes, prejudice and discrimination surmount “diversity and inclusion” cliché. Evidence proves we fought civil war over slavery, yet southern denial asserts the primacy of states’ rights.

It chilled me to see those in person. Does any other nation honor treason?

Ancient Greek gods mirrored human nature’s jealousy, wisdom, rage. They quarreled through proxy wars as do Russia and the U.S. in Yemen, orchestrating who would live or die on Trojan plains in Homer’s Iliad: “Menelaus, drawing his sword with silver studs, hacked Pisander between the eyes, the bridge of his nose, and bone cracked, blood sprayed and both eyes dropped at his feet to mix in the dust – he curled and crashed. Digging a heel in his chest Menelaus stripped his gear and vaunted out in glory.”

War makes men beasts. Perhaps guilt prompts our rampant hero labels, to divert us from the plight of veterans traumatized or broken though heroic. President Eisenhower warned of the military-industrial complex but didn’t stem its selfish power. “Mondale wants to raise the Defense budget by 4 percent, Glenn by 6 percent,” Senator McGovern said before the 1984 Democratic primaries, to my wife Sharon and me in his office, “I want to cut it by 25 percent.”

On a micro level, a Black man across the street yelled “You! Put a dollar on the floor!” as I, white, turned a corner on my daily perimeter walk of Prospect Park’s Parade Ground. He reached me, breached my comfort zone as his chest bumped mine, and demanded the one though I offered more. “Take care, let’s slow this down, you’re my brother,” I said while complying. I felt sad, not afraid, at his anger, my consent perhaps his tasting power. It left me distressed that the self-professed “greatest country in the history of the world” won't nurture its people.

Could climate change actualize the Biblical tale of God's deluge if we don't change our ways?