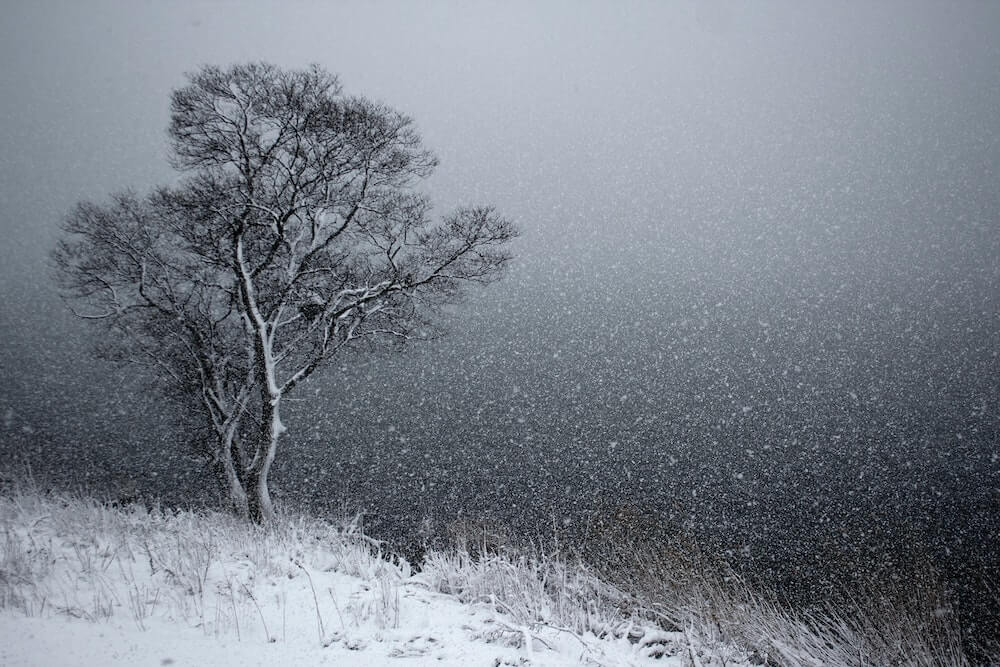 It’s late October and the cold has begun. Normally, the winter comes, the world freezes, and by the Spring, the frigidity of dormancy melts and the earth is reborn again. But this year, with the constant aura of doom impending, the hope of Spring renewal seems distant and elusive. I dread the weariness and bitterness this winter will bring. Already weary, already bitter, the shortening days and dropping temperatures carry a darkened tunnel looming in the near future. I know the permanence of winters—I know the dread of uncertainty.

I look now at my Heater on. It warms my core, and I feel a faint blush as the external heat covers the internal shiver of my appendages. I think of all my homes away from home where my loved ones will spend layered with sweaters and cuddling close to share one’s heat. I yearn for the resourcefulness of life. For the meals of warm soup, hot water footbaths, woodfires, and hot water bottles. Woolen socks and scarves at bed.

The hum of the heater does not drown out the constant running of unsettled thoughts, but it does drone loud enough to obstruct the usual silences of loneliness and existentialism. The shortening days do little but recount this year’s perpetual feeling of separation and loss. The winter of winters impending, closing in with no escape.

As our society stumbles into the era of climate vengeance, I wonder when the metaphorical winter will yield. Will rebirth come in the Spring? Or will a frozen and arid winter dry the soil and suffocate the seedlings? Will next winter be as harrowing, or will it arrive as a dark spot amidst a paradigmatic light?

I think of the energy I use in our consumption-driven system. How many metric tons is my heater releasing? How many in the apartment complex? How many emissions did it take to boil the water for my tea, or to heat my canned soup, or to grow, transport, and process the ingredients for my soup?

As climatic extremes color our future, I question whether the coming winters will be colder, more unrelenting; or if like the fire-fuelling conditions in the summer, the years will be consistently marked by increased extremes and insecurity. Will winters bite harder, in a vengeful consequence of our greed and abuse? Should I dread the punishment or atone for humanity’s sins of atmospheric domination?

I think of everyone not privileged with the warmth of the heater, or a blanket, or familial love. How will they bare the worsening winter as our society has decided that poverty doesn’t deserve the comfort of not freezing in the wintertime?

I saw a dead woman in London one December. Lying on the streets, it was clear she had no home. The paramedics covered her with a blanket as if witnessing the corpse was so much worse than witnessing the conditions leading to her death. The ironic image that stays burned into my memory is that of her hand, stretched beyond the warmth of the futile covering, clutching cash with the rigidity of death and desire.

My heater hums as the first snowflakes of winter coalesce outside. I am reminded of the ash from this past summer’s fires. Raining from the sky and settling on the surfaces and the ground, visual reminders of the cremation of our oxygenators. Unlike the snow blanketing the earth in a child-like innocence, the ash announces destruction, it announced the arrival of a climate-altered reality. For two weeks in Oregon, the smoke penetrated our nostrils and lungs and obstructed the sun from summer’s sky. The climate, spiteful and spewing, precipitated a wildfire season unlike any before. Across the West Coast and Mountain West, individuals and communities stared at the sky with apprehension and despair.

While in winters past, I yearned for reprieve from the frozen bite and gray skies, the fires had me hawkishly tracking the forecasted rain and colder temperatures, anything to mitigate the fire-fuelling conditions. In the winter, I anguish in the outdoors. During the fires, I stared out the window with intent and anticipation. Waiting for the smoke to subside and the ash to advance, so I could enjoy the privilege of breath, so I no longer had to fear for the safety of my forests and my state. Despite the promises of numbing cold burning brightly ahead, I whisper small thoughts of gratitude that the fire season has concluded.

Like the spread of fire linearly following the path of least resistance, our year’s series of misfortune is not a chance spattering of bad luck, but rather direct consequences of our greed-fated system. As deforestation accelerates the emergence of zoonotic disease, and an environmentally and socially tilted globalized society accelerates its spread, our situation is not fortuitous. From the profiteering of information generation and dissemination, our polarizing convictions are not chance. As the fires blaze and winters loom longer, the climatic retribution from our vile atmospheric penetration allows our planet to reclaim her autonomy, to chastise our sins. While the future looms like an unyielding winter, the present resembles the flaming retributions of Hell—a consequence for humanity’s natural violation and self-worship.

I hope to see Spring again, to see rebirth and to be comforted by the certainty of nature’s cycles. I hope societal’s New Year resolutions will reprioritize our values and our actions. I hope to endure through the dark cold.

As if the future is one big winter, bitter and biting, the upsurgence of my grief and the fear of tomorrow overwhelming in my mind as I turn the heater off.

Micaela Edelson is a passionate writer of prose and poetry, specifically surrounding humanity’s constructed relationship with the natural world. Although she is a novice writer, her work has been published in Humana Obscura literary magazine and Red Flag International Magazine.