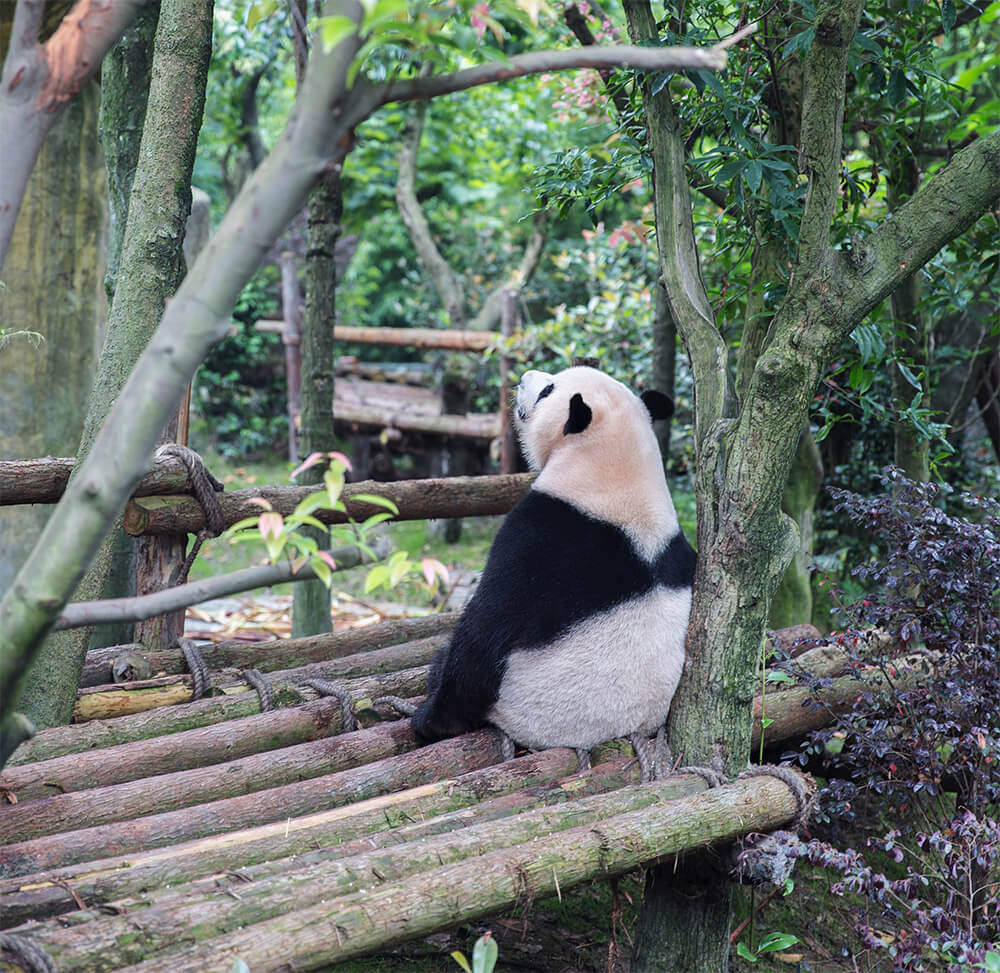 I went to China to hug a panda.

When I first learned that the Sichuan province in China is the only place on the planet that allows physical contact with panda bears, I knew immediately that I had to go.

There is no denying that I could have used a break from my fast-paced life. In San Francisco, life felt short and busy, a constant motion of social distractions, dreadful traffic, and a predictably busy schedule. It was like living in a windowless Las Vegas casino with loud noises, high energy, and countless distractions, and no windows out to Nature, and no notice of time passing. My days were filled with deadlines, client meetings, managing a social calendar, and endless tasks. For a long time, I had defined happiness through working hard, achieving professional status, entertaining myself and others, and acquiring material things.

Two years prior to my China trip, I'd left a demanding job at a promising start-up company to work for myself. I was throwing away years spent meticulously building a career that provided security, value, and high income. Was I naïve to quit my work with no guaranteed back-up plan? Could I afford to employ myself? I wasn't sure of the answers to these questions, but I was sure that I was gambling with my youth and time: things I could never get back. Leaving my predictable daily routine felt like stepping out of a flying aircraft, skydiving into fog with no visibility for a landing spot below.

Taking a trip to China by myself had a texture similar to quitting my job. I needed to touch a piece of life that was totally outside my normal, confined, and fully secure world. I felt that I was aging, and if I put off the trip, it might never happen. Hugging pandas, I knew with my whole heart, was worth being stuffed into a boxed-like seat for a fifteen-hour plane ride from San Francisco to Chengdu.

On the flight, my thoughts toggled between fears of traveling alone internationally to anxieties about China's vague rules on panda hugging. I had completed my vaccination and volunteer forms. Yet, the mixed messages online and over the phone created a mystery around panda-hugging policies. Would I have the opportunity to wrap a panda in a giant hug? Was traveling to China alone a naive decision? Was China safe?

After landing in Chengdu, the capital of Sichuan, a quick stroll through the airport taught me that English is not the world's most commonly used language—Mandarin is. Neither my animated facial expressions nor the Google Translate app could remedy the language barrier. Still, the Chinese people and I communicated even more genuinely than if we were speaking the same language.

A combination of heavy winter overcast clouds, bleaching out the sunlight, and the overuse of modern concrete skyscrapers, planted all over town, gave the city of Chengdu a gray undertone color. Even though I expected a modernized city, I also imagined finding traces of China's 4,000 years of history—or at least some connection to the ancient minds that, for instance, developed the Silk Road. Instead, Chengdu seemed like any other industrial city I had visited—a mix of New York, Vancouver, and San Francisco. Overly populated, fast-paced, and prosperous, with high-end shopping malls, restaurants, and ubiquitous construction work.

The Dujiangyan Panda Center was located near the foot of Mount Qingcheng. A glimpse at the glorious peak of the mountain was all the caffeine I needed at 7:30 in the morning. The air was cool and refreshing as the sun, hidden behind the dense clouds, could barely shine in purity. The road leading to the Panda Center partially passed along the Min River, a flat land with farming activities, and compact settlements.

At the Panda Center the morning drizzle diffused the air with the fresh fragrance of the earth. Besides the occasional chitter-chatter of birds, the forest, covered in bamboo, and lush trees, was as calm as a sanctuary. I spotted several giant pandas along the ridge of the walking path. Standing in front of the giant bears, I shared the same delight for the pandas as the middle-aged lady next to me who spoke no English. She and I communicated through smiles, thumbs up, and showing each other pictures in our cameras. She squeezed my hands when she saw pictures she liked, and at that moment, we both let go of the safety of our words and transcended any language barrier. We relied on our humanity and love of giant pandas to share a moment of pure joy.

Like giant teddy bears dressed in black and white fleece suits, the pandas trundled across the moist and muddy ground. They projected a deceptively clumsy and awkward look, which was dispelled by the agility and strength shown as they pulled their chubby weight up the tree trunks. Baby pandas ambled up the trees like nimble cats clinging to slender branches. I was tickled with the thought of hugging them.

The panda keeper assigned to guide me was a thirty-three-year-old woman named Jane. "Innocently charismatic" sums up Jane's attitude towards her panda-keeping job. Jane's response to my plea for cuddling with the pandas was a final, firm, and nonnegotiable “NO.” She explained with a stone face that China's policies had changed in 2017 after one panda died of what was speculated to be detrimental contact with tourists. She then assured me that I could get a similar experience by feeding and watching the pandas.

Between touching a panda and watching a panda lies a large empty space, and that emptiness creates an entirely different experience. It's like the difference between looking at a box of Godiva chocolate versus tasting a piece of that chocolate. Needless to say, touching is sensual, primal, and visceral, while watching is cerebral.

I came to China to touch the panda bear, to trace my hands over the bear's coat, to hear his heartbeat, to smell the waxy scent that marks his territory, and to have my breath mixed with his—even if only for a moment. I didn't suffer through a fifteen-hour flight for a disheartening Look-But-Don't-Touch experience of unfulfilled longing. What do you do when reality doesn't fit into the shape of your imagination? I decided to accept my disappointment and make the rest of my experience as rich and fulfilling as possible.

When it was time to feed the panda bear, I knelt two feet away from his belly, close enough to see the moistness of his nose, but far enough to give the panda his personal space. Pandas look adorable on TV, but in real life, their sheer mass, long claws, and needle-sharp teeth highlight their physical power. Imagining hugging the bear made me feel simultaneously terrified and alive.

To understand bears and care about them is to understand a species that is neither tameable like dogs, nor a herd animal like horses. All adult bears are wild, territorial loners. Pandas are no exception. They generally don't make eye contact, but if they do, you’d better know how to read their face before the bear cancels all your hopes and dreams.

The panda bear I fed was no different. It avoided my eyes but was fully aware of the carrot in my hand, and, most likely, the tension in my body. How often do I have the opportunity to be within touching distance of a giant panda bear!

Later, when I was surrounded by the calmness of the bamboo forest and was able to absorb my experience, everything that mattered in San Francisco seemed irrelevant to living a meaningful life.

Feeding the panda, I began to piece together a picture of a life that had nothing to do with business, clients, image, approval, status, reputation, advantage, or material possessions. I felt the birth of an understanding that didn't advance me financially or materially, yet it stretched my heart to loving the natural world that existed beyond my normal experience; an experience that I can only describe as an unbearable yearning, a tender heartache that was rich in caring and love.

Despite the differences in our circumstances, I felt a connectedness with the pandas. I was aware that the pandas and I were sharing a slice of our lifespans, and that it was most likely not going to happen again. Both giant pandas and I are vulnerable to life's uncertainties, and neither one of us has a guarantee that we will take our next breath. Even so, pandas living in the wild are surely more aware of the potential dangers than I am living under the safety of a predictable city life powered by high technology.

To know the power of the wild is to know real power. Witnessing the wildness of panda bears let me experience a wildlife that is completely congruent with itself. No dividedness, no internal contradiction, no denial of reality. Just a simple harmonious existence with life, both internally and externally. Qualities that I often lack.

Shortly after returning from China in January 2020, I learned that I was there while a deadly virus began to chew into the fabric of ordinary human life. In a matter of months, the virus permeated through the globe like ink seeping through a canvas, thoroughly staining the mental images we had carefully crafted for our lives.

Like all of us, I experienced a halt to the whirlwind of my life activities. Time slowed. Conferences, networking events, baseball games, and social gatherings were canceled. The ordinary fact of being alive—a fact that we had taken for granted—was suddenly challenged in the most nondiscriminatory way. The eerie virus reminded me that no invisible bubble could protect any of us from our vulnerability, a wisdom pandas seemed to carry instinctually, and one that I needed to absorb.

Even if people are not suffering physically with illness, they may be suffering mentally and emotionally. In these uncertain times, where the fragility of life more than ever makes me want meaning, I comfort myself with affectionate memories of the panda bears who showed me the real power of being in harmony with self and life.

I went to China to hug a panda. In the end, I may not have been able to touch the pandas, but the pandas certainly touched me.

Golnaz Moeini is an independent medical device consultant. She lives in San Francisco, and when not serving clients, she hikes, writes, pets animals, rides horses, takes pictures of Nature, or soaks in the sun in the countryside with a book.