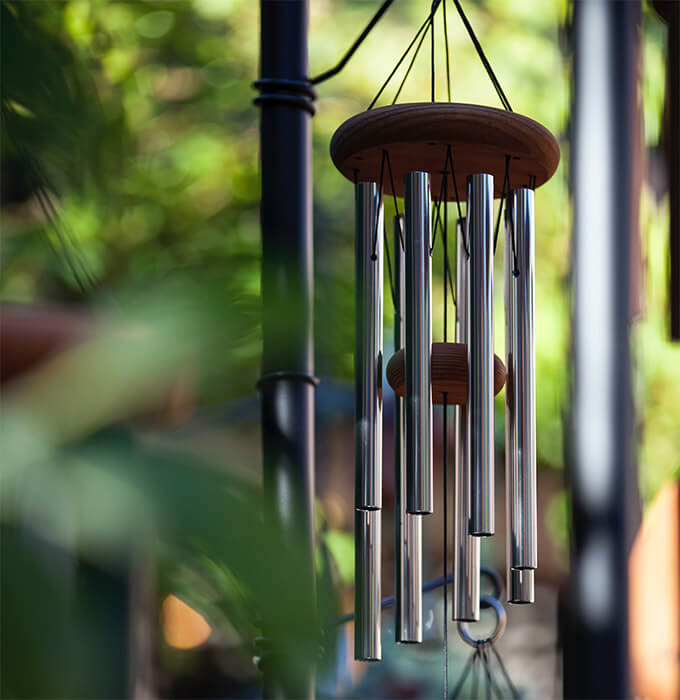 We are projections on a sheet in the yard,

When there is nothing left to play, the children retreat

to flashlight tag, and the women refresh their wine.

The men huddle in the darkness.

Someone is talking about the circus,

and a boy on stilts who used to shout insults at the crowd.

Your mama's so short, she needs a ladder to pick up a dime.

The landscape is a mishmash of competing conversations

against a backdrop of cricket chirps.

A chalk-spot of moon hovers overhead.

The men join the women, and the story of how each couple met

becomes fodder for laughs and intrigue.

in a nearby state—her just out of college.

What he doesn't say is that he worked there

and had signed her up with her then husband—

that ended badly or well, depending on your perspective.

Desire is a stack of chips pushed into the middle of the poker table, all in.

Another one, he interjects. Your mama's so short, she poses for trophies.

The men laugh. The women look at each other and smile.

The origin story was rehearsed, and tomorrow's verdict

will be that it was fine. Such stories carry a short middle and end,

A child emerges with a frog in her hand.

Can we keep it? she asks. Absolutely not, her mother says.

Polite laughter, then the girl runs back to the other children.

We have reached a crossroads, nay, a threshold.

Someone has walked into the wind chimes near the back door:

hollow bamboo and aluminum with no cadence.

I think someone has had too much to drink, someone says,

The new couple stand as one shadow, and she says

it's time to go, something about stopping at the dry cleaners

on the way to work in the morning.

The soundtrack in her head plays, You're a fraud.

She smiles. You matter. You’re a good man, she says,

then switches over to another station.

Big Score on a Little Porch

A couple of women in hospital scrubs

steal packages on porches. When

the homeowner checks the footage

he finds the culprit is unfindable,

They parked far enough away so not

even sure of the car or whether they

walked a few houses down where they

no one. The video is uploaded and shared

to care. The police file an incident report

over the phone. He offers the video

to an Amazon customer service rep

out a replacement. These things just

happen, she says. The price of theft

and damage already calculated in,

less lately because most people are

home but the delivery people don't

ring the doorbell so there's always

the chance what happened here will

are opening the box after their big score:

a bottle of anti-itch foot spray

and a 5-pound bag of Epsom salt.

Falling Outside the Body

Each blade of grass pressed by the bottom of my feet, I walk in open opposition to those seated at the wedding where I should have been your groom. I had learned to speak American through a series of tapes that arrived in the mail, being out of place more a mood than the actual spot where I buried my face into a pillow.

You look at me the way women look at the rib cages of Victorian corset wearers, holding the strings in their mouths while tightening the straps. Cordial cherries I bought at the drug store and administered to those I disdain. A drawer of zip ties and rubber bands. The way Sarajevo means something to those with a past and a passport.

A cat with a factory of purrs, and I will write the pen from the table and across the linoleum. The monotony of friendship, mathematical imprecision at the shoulders my head tucks into, a story of revolution where no hero, no David or Goliath. The haves and have nots both own flat screen TVs, microwaves, bicycles with the handshake of handlebars, and froyo on almost every corner.

Every 50 years, a family tree re-written, two people fall into the pre-divorced state of marriage, followed by children. Desire on every billboard, commercial, college application. We are being marketed a version of ourselves: improved, enhanced, saddled with one more vacation getaway, a car more indulgent than the last. Was this where I lost you?

Life has starved the emotional connections on the vine so that social media posts trigger feelings. The Christmas commercial for a grocery chain prompts tears as I realize what a dead grandparent truly means. The time we stood on your apartment balcony and caught snowflakes on our tongues.

The boy at middle school whose mother packaged his sandwich in carefully folded wax paper, he experienced just a bit more love than the boy with the dollar bill for a hot lunch. Doubt is the real currency of capitalism. What if my future kids think I don't love them because I didn't buy them Lunchables? What if my future wife realizes all that's stopping her from sleeping with other men is whether I bought the best patio set?

The landscape architect says he can tell your husband loves his family before steering him to the deluxe package, with swimming pool and white picket fence: vinyl, maintenance free, years of family parties before the inevitable divorce. My mind is a pocket cactus I take out and set on the window sill in the kitchen.

During a recent lunch with a co-worker, I learned she was on marriage number four. I loved them all, she said. There's just a sort of magic that takes place in the first three years that she can only catch in a new one, a new ring, proposal, honeymoon, getting to know someone all over again for the not first time.

Even the waiters are singing along to the Christmas song amidst the clink of dishes and glasses filled and refilled. Not to trouble you taps the outside of my car window, but it's awfully cold, and how much alive do I want to feel on my ride home?

A $5 bill I keep in the center console for such occasions. The truth in giving isn't the size so much as the convenience, how paper currency folded in half and slipped like Cold War secrets takes me back. The time I fed scraps to the stray dog, and he came back with friends, so you called animal control. For their own good.

The amount of trouble caring takes depends on the make of the car and the condition of the roads. Under my seat, the ashes of a favorite uncle sealed in a cardboard box, waiting for just the right time I’m not sure will ever come.

At the crossroads of empty gestures, I wonder if tipping the barista is a way of asserting my humanity. I sit in front of my laptop, my finger hovering over the track pad uncertain whether to accept your friend request. I wonder why you are circling back to me: perhaps an inventory of paths not taken, perhaps an easier way to measure the years and ultimately keep score?

Mickie Kennedy is an American poet who resides in Baltimore County, Maryland with his wife, husband, son, daughter, and two feuding cats. He enjoys British science fiction and the idea of long hikes in nature. His work has appeared in American Letters & Commentary, Artword Magazine, Conduit, Portland Review, Rockhurst Review, and Wisconsin Review. He earned an MFA from George Mason University.