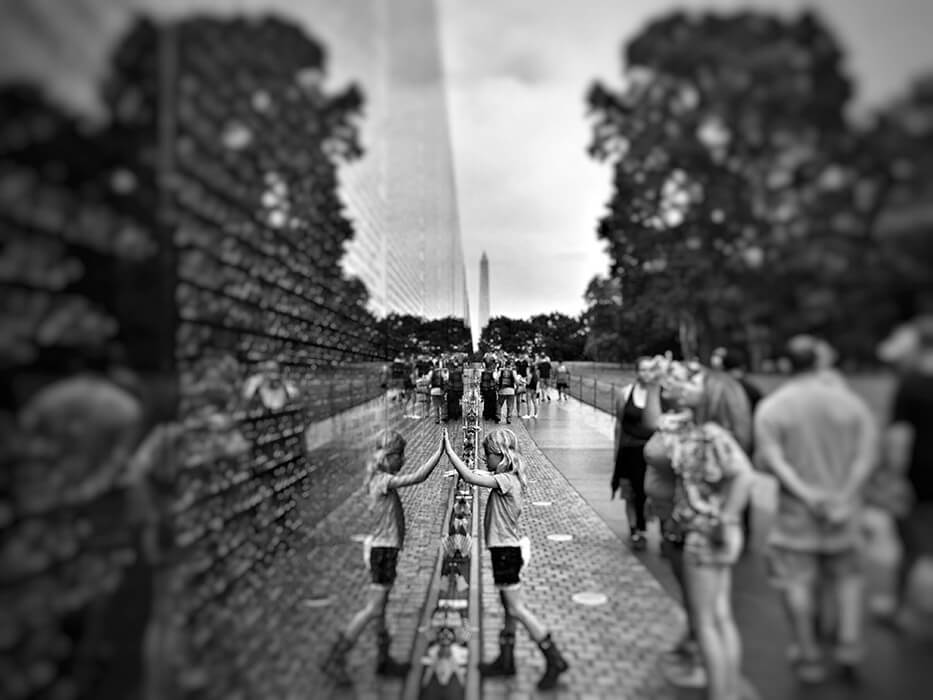 I went to Vietnam in 1968 as a young, naïve kid, serving with the First Cavalry Division. By the end of my tour, I was no longer quite so naïve. Typical, I think, of so many kids who went to Vietnam thinking they were serving freedom and democracy when, in fact, we were serving the political ambitions of dictators in Vietnam and the political ambitions of those running our country at the time.

Those of us who saw combat, whether up close or on the edge, often learned haunting lessons about life and living in the context of death and dying. Perhaps foremost, we learned that war is not glorious, that war kills and maims—soldiers and civilians alike, children and adults alike, good and bad alike. What became quickly obvious was that war mostly kills innocent civilians. The ordnance of war is completely amoral, as it ever has been and ever will be. When an innocent child gets in the way of a bullet, the child dies. As does the child’s father or mother or any other relative who is near an exploding bomb or missile.

We learned that war obliterates homes, places of work, and places of worship. War annihilates hopes and dreams—for both the old, who want a better life for their children, and the young, who only want peace and a fulfilling life. War is nothing like it’s presented on the silver screen by John Wayne or Sly Stallone or a host of other fake soldiers in fake battles conjured up by Hollywood. Nor is war a video game that can be rebooted if a contestant is killed. But unless we veterans pass on our insights, our country will repeat past failures—even as we currently repeat the same mistakes we made in Vietnam in our forever wars against terrorism across the Greater Middle East.

Sadly, we Vietnam vets have been joined by thousands of veterans from the Iraq and Afghanistan wars—and a host of other operations around the world that Congress never authorized, as if our country has some high insight that allows us to kill and destroy—for what? I don’t know. I do know that the results are horrific death and destruction, and the creation of millions of refugees. I do know that for every civilian we kill, we create ten new terrorists. Where’s the logic?

But how do those of us who have experienced war pass on the insights that might lead to less war? That’s the question. The old white men who never went to war, Bush 2 and Trump—he of the fake bone spurs—have no concept of what war entails, not to mention what vets face after they return from war—both physically and mentally.

Because these on-going wars and conflicts are fought by so few, often those from the bottom of the economic ladder, the country as a whole rarely sees or understands the death, destruction, and horror involved. What’s going on in the Greater Middle East is barely mentioned anymore, and as for Africa, seldom a word. Hence the current generation of young people has virtually no understanding of what war entails, not just for soldiers but even more so for civilians. Over the past years, I’ve seen how little the high school and college students I’ve interacted with understand about war in general, not to mention any war in particular, including our mindless wars against terror.

My own experience suggests at least one way vets can educate, though I freely admit I stumbled onto this answer quite by accident. I returned from Vietnam to become a teacher and writer, and as the years passed, my experiences in Vietnam coalesced into a collection of short stories. In these stories I sought to capture the essence of what I saw and what I learned during my time in Vietnam. The result is a history, of sorts, but not history in the traditional sense. There are no dates. There are no grand geopolitical ruminations or reflections on the forces of history. There are only people—both soldiers and civilians—caught in the unforgiving talons of war.

The book has been used in college history classes by a colleague to help his students understand what the Vietnam War was like and to give them a sense of what any war entails. The professor asked me to speak to his classes after they read the book, and these question-and-answer sessions have been revealing and moving—revealing how little students know about war, and sometimes, moving, as I witnessed how many students had a real desire to understand.

My colleague passed on student responses to my book and talk, and these responses convince me that more veterans need to share with young people what they experienced in combat. Simply talking to students can be amazingly effective. As one student wrote after I spoke, he “has had the courage to be able to speak openly and allow us to benefit from what he endured.” The key word here is “benefit.” Veterans need to let young people benefit from our unique knowledge, to give them a counterweight to the idea that war solves problems or is a positive solution to conflicts, be they political, economic, or religious. Young people need to know that war is not glorious. Nor is it particularly patriotic.

Another student wrote, “The stunningly truthful stories . . . brought me to tears. Thinking about what Dr. Etchison saw, lived in, and what he dreams of now is just gut-wrenching.” This student has begun to asses on a visceral level what war means to those who participate, and perhaps this student will be less likely to see war as a viable alternative to the wide variety of conflict resolutions available to us. Perhaps to see that war marks a complete failure of civilization.

Another student wrote, “He talked about how American soldiers generally treated the Vietnamese as subhuman and the atrocities done on both sides. And I totally concur with what he said about that it’s easier to hate and kill somebody that looks and acts totally different from you.” This student was becoming aware of the viciousness of stereotypes, the dishonesty of much propaganda, and how such things destroy our common humanity. Consider some of the ugly names we have given to those we are now fighting in Afghanistan and other places where people often look, dress, and talk differently from us. And yet, every one of them wants the same thing we do—peace, stability, and a meaningful life.

We need veterans to stand up and tell young people who are often immersed in killing strange “others” in their video games that real enemies in real wars are people just like ourselves, people with the same hopes and fears and dreams we all carry in our hearts. I’ll never forget one day in Vietnam when a comrade went through the wallet of an NVA soldier he had killed in hand-to-hand combat. He found a picture of the soldier’s girlfriend, the girl that soldier would, perhaps, have married had he returned home. The girl who was living in hope of his return. The dead soldier who carried that wallet was no different from the two of us who were staring at the photo.

A student who, I suspect, speaks for many college students today, wrote the following. “Being a naïve young adult I often bury my head in the sand and like to block out horrific acts like this [Vietnam] war.” This is why it’s important for veterans who have seen the horrors of war to speak up, to let people, especially young people, know that war should never be treated lightly. That war kills and maims people just like them. And that war seldom leads to anything but more violence. Look at what’s happening in Afghanistan and Iraq—violence piled upon violence year after year. Violence that has spread to other countries. What’s the point?

One afternoon, I watched a soldier with badly charred legs and torso carried from a helicopter to an aid station, his dreams turned to ashes—literally—and I wondered if anyone in the world could advocate war had they seen the pain and suffering that young man was going through? Or seen what the rest of his life would be.

Vets also need to talk about the pain and suffering many face upon return from war. Physical pain from injury, for sure. Limbs lost. Mobility lost. But equally important, we need to talk about the devastation of PTSD—a disease than can be passed down to the children of veterans. Young people should know that 60,000 vets have committed suicide since 2008. More vets than were killed in the entire Vietnam war. Young people should know that vets with PTSD and their caregivers—mostly family members—seldom get the kind of mental health care they deserve, hence the suicides, the spousal abuse, the broken marriages, the kids with PTSD as part of their makeup.

Many students echoed the words of the following comment. “Before taking this class I didn’t know much of anything pertaining to Vietnam.” This is tragic because so much could and should have been learned from the Vietnam War. But as a country we didn’t, quickly consigning that war to the dustbin of history. And now the question becomes, will we learn anything from the current Mideast debacle? Will we even be smart enough to get out before we completely bankrupt our treasury and our standing in the world community?

One of the lessons from the Vietnam War that we should have learned was stated by one student this way. “The U.S. failed to understand the people of Vietnam, their culture, or their political ideology.” Nothing offers a greater chance for war to break out between countries than lack of understanding. That happened in Vietnam. We didn’t understand the people, the culture, the religion, or the politics. So we engaged in ten years of fruitless war that devastated their country, did massive damage to our economy, and killed between three and five million people. Now we are doing it again—because we didn’t learn.

One student zeroed in on the reason why veterans need to share their drum experiences, when he wrote, “I hope we learn from our mistakes and never let this [Vietnam War] happen again.” Sadly, we have let it happen again. But maybe we don’t have to let another Iraq or Afghanistan happen. Maybe. If we care enough. If we can finally learn that war isn’t the answer. If we learn that the drumbeats of war are a signal of failure.

I’ve come to see my collection of stories as an effective means for teaching about war and how war affects people of all ages and all walks of life. I believe this knowledge is important. I also believe that any vet sharing his experiences of war is a deterrent against taking war lightly—of not understanding just how brutal any war is. And how ineffective war is for solving problems.

Understanding the realities of war may help the next generation who will soon be leading our country not to make the same mistakes that led us into the Vietnam War—to not repeat those same mistakes that led to the Iraq War. If we veterans, old guys like me from the Vietnam War and younger vets from Afghanistan and Iraq, can help prevent similar mistakes in the future, then we’ve done right by our country. We will also be the best of patriots. And we will have done right by our fallen comrades.

Craig Etchison is a combat vet and retired professor who taught classes on war and peace over the years. His published collection of short stories, Vietnam Snapshots, is based on his war experiences. He has also published essays as well as young adult novels on the subject of war and peace.