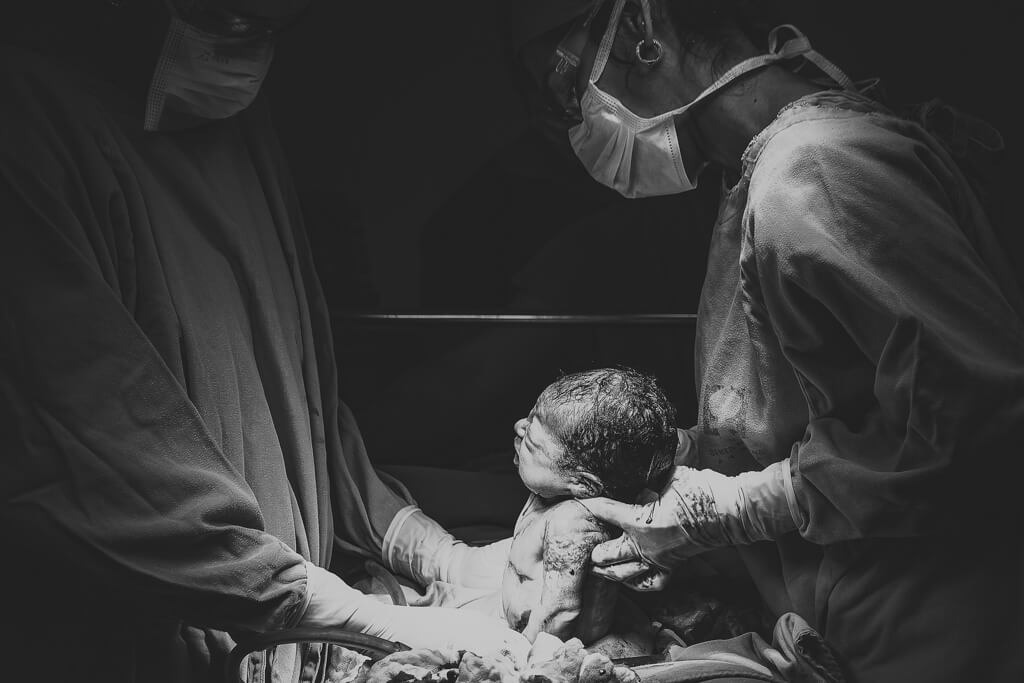 When she delivered him, occipito posterior, the back

of his skull cradled against her sacrum,

when he crowned, face up, chin up,

My father was there, wearing a hospital mask, ear to ear,

stretched across his face like a sheet spread at birth,

she would say later it was the first time

she’d seen him cry, her husband.

Then the doctor stepped in, intermediary

of the gods and mortals, the light on his tools glistered—

the scalpel, the forceps—and he began to cut the thinnest skin,

wing of a butterfly—the epithelium, the perineum-

like a soul escaping through the top of the skull,

that sacred passage, he was pulled into this world, the length

of his body covered in the silky lanugo of the womb,

shoulder and shoulder, hip and flank,

his wet plump limbs struggled forth

and then the umbilicus, tether to the immortal, was cut,

to bring forth his nativity.

The morning of her first big audition, she leaves

early, I help carry her equipment to the car—

the instrument of Orpheus, is loaded last,

its gilded crown points east where the sun will begin

its ascent in an hour, it is still dark outside, Vega glowing green

at the top of the world, and my youngest is speaking to me

in the language of music we both know, fluently,

about sound and rhythm.

This morning she borrowed a pair of my shoes,

into my tens, comfortably, and now as I re-enter the house

alone, the lights are still on in the practice room,

there is still a thrum in the air, this vibration that is not matter,

this measure of what is here, and then is not here.

When I wrote I delivered him

I meant that I brought him forth,

the blastocyst and the trophoblast—

giving way to limbs as he floated

as though without gravity,

a luminous body, suspended in the dark welkin,

tethered only to the placenta,

For a billion years the sky was dark,

celestial bodies shifting, and then

the stars came out, light by tiny light

they dawned, the hydrogen and the helium,

the sky lucent, now, when I wrote

I meant that I delivered the universe,

from within me, the cosmos,

I brought light into the world.

Holly Kelso is a career educator, and has made language and literacy her focus for twenty-four years. Her writing appears in a variety literary journals and other publications. Holly resides in Boulder City, Nevada, the town that built Hoover Dam, where she teaches reading to middle school students.