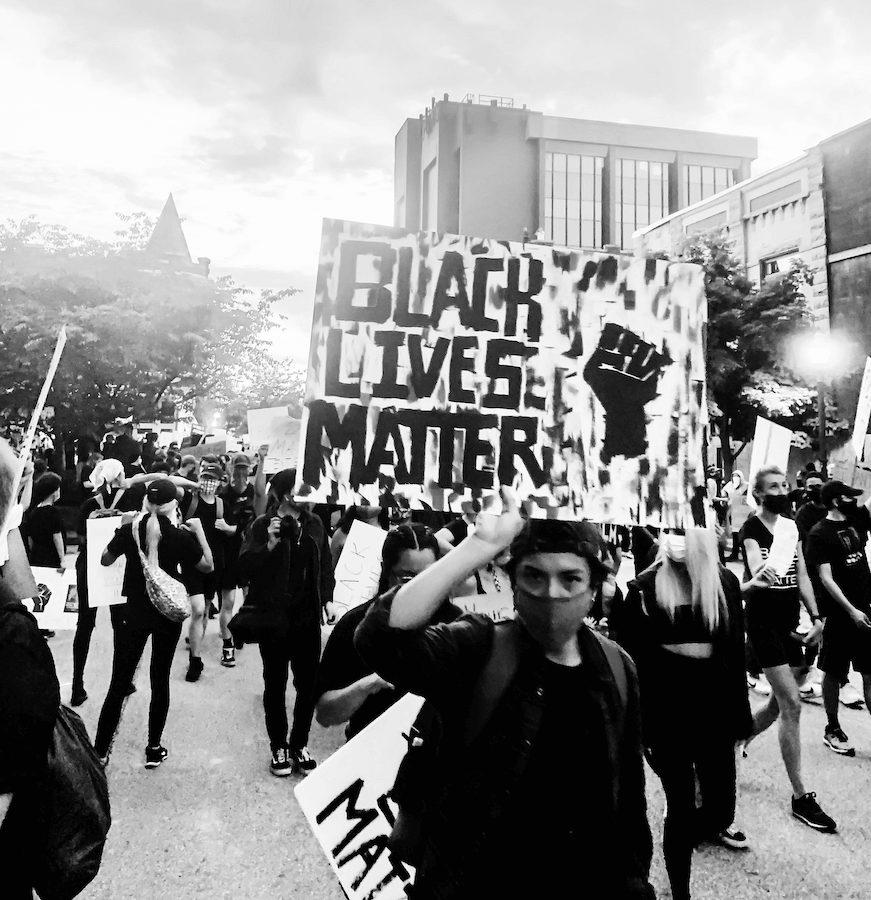 I started out the day like I always do. I took a shower. I got dressed. I went to my local cafe for some coffee. I generally try to stay away from my phone during this time. This is my time to relax and write and prepare for the day.

I am glad I checked my phone.

When I did, I saw a flood of criticism of the police. Criticism of the police, the government and the “system.” I am not blind to the intolerable acts of our current administration. I am not ignorant to racism. Nor am I saying that racism doesn’t exist. In reference to Black Lives Matter, I am of the opinion that all lives matter. Why do we have to isolate one group? Isn’t that the racism that this group is trying to eradicate?

I kept scrolling and I kept reading. A small, but noticeable, pit was developing in my stomach. A voice came with it. It was just a whisper. Audible. But quiet.

The whisper was easily combated.

I lived very close to Ferguson when Michael Brown was killed. I stayed silent for the most part and, as stated above, I got offended when “Black Lives Matter” was said.

This was different. I watched a man murder another man. I watched a human murder another man by suffocating him with his knee. He did this while fellow officers watched and George Floyd cried out for his mother and told the world that he couldn’t breathe. The officer, Derek Chauvin, did this because of the color of the man's skin. He did this because of the system allowing him to think that he could get away with it. He believed all these things because people that look like me allowed it. People like me believe that racism exists but never said anything because “it isn’t our fight.”

I sat my phone down and took a sip of my water. The pit in my stomach turned into a chasm. The voice in my head was given a megaphone.

“WHEN YOU ARE A WITNESS TO INJUSTICE AND YOU DO NOTHING, YOU ARE ON THE SIDE OF INJUSTICE.”

“A GOOD PERSON ISN’T IDLE DURING THE WAR OF GOOD VS EVIL.”

The voice is right.

What I saw in that video was pure evil. Plain and simple. There is no debating that. No gray area. I know all lives matter. What I didn’t realize is that black lives are included in that. Black lives matter are what are being threatened.

“How could I be so racist?”

“I am trying to apolog-”

“Stop thinking about yourself. This isn’t about you. It never was and that is why you never saw it.”

“But my life matters too?”

“No one is saying that it doesn’t. Your life isn’t in danger right now. The color of your skin doesn’t inherently put your life in danger.”

“It’s not my fault I was born this way. My father and sister are brown. I just didn’t –”

“Think. I can’t make you change your mind. You have to do it.”

“Ok. In an argument, the first thing you should do is assume you are wrong. Then you can see it from the other person’s point of view. Ok. Despite the fact that I am Mexican, I am white passing.”

“Due to that fact, I can’t possibly understand what black people have gone through and are currently going through.”

“What did you learn in college?”

“Due to racial profiling and harsher sentencing, black men are incarcerated at a significantly higher rate than other races and stay in jail or prison for significantly longer for the same crime.”

“Black homes and families without father figures. This is common in people who commit crimes.”

“People not getting the higher education they need to get better paying jobs and get out of the impoverished neighborhoods. Which, coincidentally, are heavily policed.”

“You also learned about housing projects and how they are also inherently racist. Since I am you, I know you can’t remember that right now.”

“I’ve always seen color. I was brought up in a racist system that conditioned me that way and I only realize now that I’ve been racist my whole life.”

The pit in my stomach has turned into a full-on nausea inducing pain.

I grabbed my phone again.

I began sharing as many Black Lives Matter posts as I could find. I read every post and learned and unlearned. Memories were flashing in my head of every time I got nervous walking down the street and saw a black man. Memories of hearing white friends use racist slurs and not saying anything because “I didn’t say it.”

“I am racist. I will change. I will be better.”

I kept posting and posting. Throughout the day and while I was at work, I was posting. I now know that due to the color of my skin, I have a platform and a voice that has been silent.

I will no longer be silent during injustice. This is good vs evil and if I believe myself to be a “good” person, I have to prove it.

The pit in my stomach never left but the voice got quieter.

I forced myself to sleep.

I woke up the next day to those whispered words.

I donated to the cause. I saw white friends finding the courage, like I did, to speak up.

“It’s not enough. You can do more. Other people might not be able to or be too afraid to. But you know you can.”

“Why do I have to do more? I’ve donated. I have kept the issue present.”

I got ready like I always do. Shower. Clothes. Cafe.

The pit in my stomach grew. Reluctantly, I took my phone out.

I saw videos of the protests. I saw police beat and gas and mace non-violent protesters. I saw police incite violence so they could brutalize their own people at a protest against police brutality.

The pit grew larger as I continued to see clip after clip of police brutalizing protesters. My adrenaline spiked. My hands were clammy and my heart was racing. I wanted to run.

“Is that really the reason you won’t go?”

“I am afraid of being attacked.”

I noticed I was shaking at this point.

“I am afraid the police will see a criminal when they look at me.”

“This is a fraction of the fear that black people have felt for four hundred years. All that time white people and white passing people who ‘opposed’ racism were silent. I was silent. I let it happen.”

“So I will march. I will protest. I will scream. I will be seen so that I can give other white people the courage to be ‘good people.’ To see that this is their fight. To see that the fight is good vs evil and good must win.”

“I will fight injustice.”

CJ Acosta is a writer and systems specialist based out of Saint Louis, Missouri. He hopes to have his first novel published soon and is working on a second. You can see more of his work at cjandtheblankpage.com.