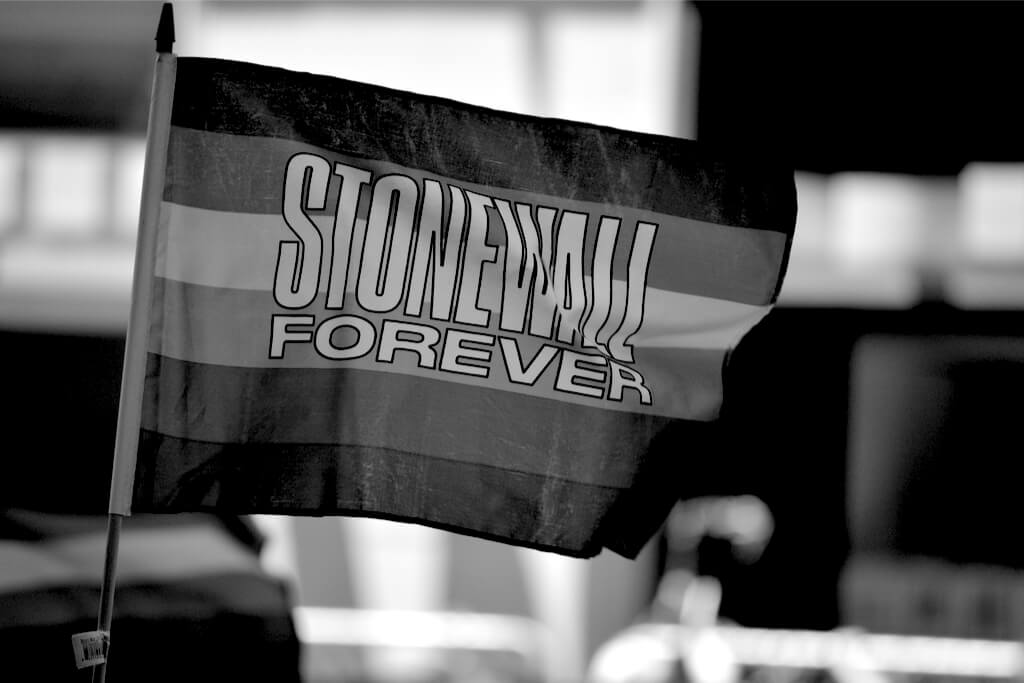 Dear Young Queer Non-Binary Poets, Thank you for creating new avenues of exploration, and this is what we experienced:

Older than you, I wandered wide, but infinitely narrow, New York, Queens streets in search of my body. Yes, my body. I sat in the drip drip drip of basement pipes with my best girlfriend as we promised to grow up together. This didn’t happen. I grew up. Left. She shattered under the weight of her father’s history of mental depression.

I grew up and have the scars to prove it: shin dented and scraped, and a cut over my eye where J. ran into my head with her teeth as I went to tag her out in running bases. I still can awkwardly bend the finger that my dad splinted saying everything would be okay; so I went bowling. The body I tore at and wore out. The knee whose cartilage collapsed so I could pretend I couldn’t do PE anymore. The body I learned how to disappear under too big clothes and lunches thrown out.

Older than you, and younger than Sylvia, Marsha and Stormé—Stonewall night I was only fourteen and slept beneath a window to catch whatever bit of breeze could cover me this stifling summer night. The earth did not rock for me that night. I sheltered in a small space until I disappeared. That summer I was struck by a disease that sent blisters down my throat—some unknown virus, and a high fever. It was as though I were left speechless, which I was. The summer I almost beat Ira at arm-wrestling and walked away, pretending I could not win. The summer I stopped. Breath and sound.

I was as Queer as anyone could be. I switched up the unsightly uniform of jumpers and shoes for tee shirts, jeans and work boots the day they said we could wear pants to school in 1968. I bought myself a watch cap that I wore all winter, even in classrooms, and a military surplus backpack. All of this I bought myself, out of money I earned so no one could tell me what to wear, as I traveled by train to the Lower East Side—Canal Street Jeans. But as the outer edges of my appearances became more “me,” I retreated.

I don’t know how I couldn’t have known about Stonewall. In October 1969 I attended, by myself, the National March against the Vietnam War. I skipped school and went to Bryant Park to join over 100,000 other people to stop the War in Vietnam. I went to a meeting to set up a civilian review board to stop police violence. My favorite days consisted of walking from East 81st Street all the way down to the Village. I sit in Washington Square to listen to guitar playing and the tin-pan reverberations sending out rhythms everyone danced to. So how could I have not known about Stonewall when the “gay” village was only blocks away from where I sat: Sheridan Square, Christopher Street, all famous now, but then just names of West Village streets.

Once, years after I graduated from high school and had come out, I told an ex-teacher that I wished I had come out in high school. One friend, a student who graduated a year before me, came out and even got married after she left high school. So I knew it was possible. I watched Allen Ginsberg and his father Louis on WNYC public TV talk about poetry and their relationship. I was stunned that Allen could talk about being gay in such a public way. I threaded his words into the synapses of my brain and the sinews of my body. Yet, I didn’t come out. This was a different generation, and I grew up in a working class neighborhood in which one risked one’s life being queer, or a person of color, or even a Jew.

So my ex-teacher said, “That wouldn’t have been a good idea.”

And I responded, “You mean that I never would have gotten out of high school alive.”

She shook her head yes. But our conversation stopped with her gesture. It took me four years after high school to come out.

Stonewall gave me my life without me knowing it. But that life was difficult to claim because of the number of years I hid from myself and others, and the negative messages I got about “lesbians.” My mother, standing in our barely walk-in kitchen, told me:

“R.’s daughter was better off now that she had a child although she was unmarried than when she was in a ‘lesbian relationship.’”

In the 1960s that said it all; being queer was about as low as a person could get in the hierarchy of acceptable beings. My response to the messages I received from peers, from family, from teachers was that I should dissolve.

So I mastered the art of disappearing, first, by not eating. I watched my body literally shrink until my mother cried instead of getting angry. So I began to eat again. Then, by smoking cigarettes I pushed down all the breath I had back inside me. I rejected the very air around me. And finally, by drinking alcohol so I could be what I thought was myself: funny, sociable, and acceptable. People thought I was entertaining when I was drunk and didn’t realize that it was becoming a daily habit. I had learned well how to do disappearing acts. Of all of these, cigarettes were the most difficult to give up. Smoking was a social activity, and I could hold a lit cigarette in my mouth at a bar and put on a leather jacket and look tough. That edge was essential to my presentation. But appearances are not a “reclamation” of self.

Learning about Stonewall and the role of drag queens in the fight for liberation did give me my body back. Each time I was/am confronted with the hatred that is directed towards my body, towards how I appear, I imagine myself at the Stonewall Inn, throwing the first brick, shattering the glass, opening the fire hydrant so the cops would go sliding through the streets instead of us. I release the cuffs they would have put around my wrists. I proudly hold up the Daily News where my name would have been printed as a defiant butch dyke. I let go the scream I held back hiding in corners. I don’t try to force back the tears when remembering the boys who screamed at me, “So you want to try out for the baseball team,” and then laughed at me, when what I really wanted to do was prove that I could play better than the boys.

So this is for women such as Joan Nestle who gave us the language to talk about gender variation long before the thoughts about non-binary came into existence. And this is for Stormé DeLarverie, and Mabel Hampton, who courageously presented themselves in suits and ties even when that meant the cops would beat them and humiliate them. And this is for all the queer kids of the 1960s who hid in bathrooms, dressed the way they felt their bodies would fit, even as they feared their parents might find them. We did survive. Just as C., from my neighborhood, finally went to France to become a model and fled the torture of constant fear of being beat up for not being good at sports or fist fighting, and K. who pretended his “girlfriend” Jean was not really Gene, a man, and all those young girls I never connected with for our fear of being called “lesbos.”

Yes, we escaped. But this escape was an escape “to” feeling at home with bodies, and not an escape from. For this we have to thank not just the warriors of Stonewall, but all those who fought before Stonewall was even a thought.

Carla Schick is a queer transformative social justice activist/writer. They strive to show the intersections of writing & the struggles in our lives. They have been published in the Forum literary journal, Milvia St., A Gathering of the Tribes (online), Earth's Daughters, Visible Ink and Sinister Wisdom.