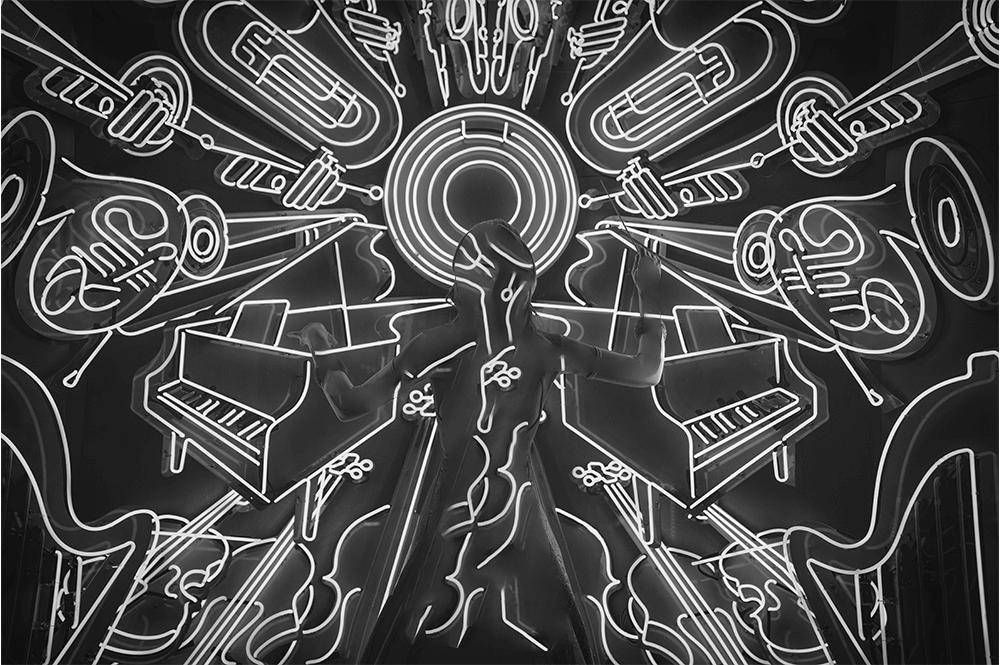 When I learned at my high school reunion that Mr. Skar had died, I felt relieved, almost giddy. Though not still musically inclined, I could’ve played a beautiful song—call it an ode to joy—to celebrate his death.

I was shocked at my reaction. Despite the decade-plus of recovery from addiction I had put together and all the therapy I’d done, it was apparent how much of my hatred of perpetrating men I’d put on Skar, how much his behavior had affected me, how I’d held my feelings inside all those years.

At the beginning of eighth grade, Skar took over as our band director after Mr. Landis, a kind and bedraggled man with chronic dandruff, was demoted back to the elementary school for unknown reasons—the rumor being he had a nervous breakdown.

When I say Skar took over as band director, I mean he took over, this big hulking guy with pop-out eyes, a bald head and a huge belly. He had a military background and the posture to match; he stood up straighter than even my father who’d retired as Major from the U.S Marine Corps.

Skar took a straggly-assed group of junior high school kids and turned us into a marching band. He convinced the school administration to buy the high school’s old band uniforms and pay to have them dyed black and red, our school colors. He had us out in the parking lot every afternoon, Skar alongside us like a drill sergeant, yelling instructions and insults as we learned to march in impossibly straight rows and make snappy right and left turns, the woodwinds in the front rows of the band, the percussion and trombones and sousaphones in the back.

Since I couldn’t speak in my family, playing music was the one way I could express myself—use my voice. When I practiced until I got the notes just right, I felt open and free and unrestricted. I could almost see my notes flying out the open window as I practiced, as if I was saying something out loud and the whole world was listening.

Music also appealed to the perfectionist in me. It was orderly, cut and dried. In classical music at least, there’s a right note and a wrong note—every time. There’s the right rhythm and the wrong rhythm—every time. Each instrument has its own correct fingerings.

I remember the musty smell of the student-model flute my parents first rented, then bought for me. I cleaned the spit out of my flute after every practice by threading one of my dad’s old handkerchiefs through the hole in the top of a long metal rod that fit in its own special place inside the flute case. I liked learning the fingerings for the flute more than I liked working on my embouchure. I wanted to play fast, fast, fast.

Skar saw my potential and encouraged me. I was first flute for the fall semester of the eighth grade. By then, Skar had gotten the school to purchase an oboe from a Sacramento music store, and I wound up being the oboe player for the Joseph Kerr Junior High School Concert Band. Not for marching band; I still played flute for that.

Skar arranged for the band room to be open in the morning before school, for those of us who wanted to go in early and practice in one of the little soundproof booths that lined the inside wall of the band room. The school day didn’t begin until 9:45 due to budget cuts and a lack of school buses, so we nerdy band members had plenty of time to practice and fool around. The oboe is a difficult instrument to play. It has basically the same fingering as a flute, but you have to hold a lot of air inside your diaphragm and let it out slowly through a small double reed. Skar’s thing about all woodwind instruments was this: Keep your diaphragm hard.

When we practiced in the little rooms before school, Skar would come in without knocking to help us individually, his form of help being this: As you played, he would poke you in the belly with his index finger to see if your diaphragm was firm. After giving you advice about your playing, he’d tickle you a little under one or both arms, then he’d leave. I’m pretty sure he did this only to the girls.

Skar arranged oboe lessons for me with a man named Mr. Hall, who was once first oboist for some big city symphony orchestra. He smelled like booze and cigarettes and held lessons up in the sheet music stacks above the main floor of the music store in downtown Sacramento. I had to ride up to the city once a week with Skar in his pick-up truck. My mom would give me a ride home after she got off work; sometimes we stopped for dinner on the way.

When I rode with Skar, I always slid way over on the bench seat of his truck, as close to the door as I could possibly get.

At the reunion picnic in the park next to our old high school, the reunited stage band played (led by Mr. Dick, our now-retired high school band director and a much nicer guy than Skar). During a break, I walked up to Peggy Schaeffer, a saxophonist who’d also been in my church youth group, and asked: “Was Skar ever mean to you? Did he ever poke you in the belly or tickle you in the practice rooms in junior high?”

Peggy, long and lanky, a runner, a single mom, said: “Sure. He did that one time and then I made sure I was never alone with him again.”

Oh, I thought. That easy, huh? How come I didn’t do that?

My face reddened with shame. I sat down at one of the empty picnic tables and listened to the stage band. Donny Ralph, my former nemesis in band and English class, had called and invited me to play my flute at the reunion picnic, but I hadn’t practiced in years, so I turned him down.

A couple of weeks into spring semester of ninth grade, Skar ordered me into his office and told me to sit down. He handed me some sheet music—an oboe solo with band accompaniment. At a glance, I could tell the music was very difficult.

“I want you to play this at the Spring Concert,” he said, grinning. “You’ll stand up on the stage while the band plays below you in the pit.”

No, I said to myself. No. I’d finally gotten used to playing oboe solos as part of the band, sitting on the same level as them. I’d even actually played in front of a panel of strangers to try out for State Honor Band. But no way was I going to stand up on the stage in front of hundreds of people and play an oboe solo. Uh-uh. And there was only a month left before the concert.

Skar must’ve seen something on my face. “Think about it,” he said.

A few days later, I sat in a chair in Skar’s office at lunchtime, across from him.

“What?” Incredulous would be a good word for his tone of voice.

He’d chosen me to play the oboe, he’d driven me up to the city every week for lessons, he’d picked me to be the student director. And now he wanted me to play the spring solo.

I took what I thought was the humble high road. “I can’t do it,” I said. “It’s too hard. There’s not enough time.” I couldn’t tell him the real reason was I hated my fat body. I’m not sure if I even knew that, myself.

Skar got out of his chair and came toward me. Some of my bandmates stood in the doorway, watching.

I slid down a bit in my chair, ashamed of myself for not being able to do the solo, for not wanting to.

Skar came closer and closer and I froze. My body felt as if it could burst like a water balloon. He reached over and started tickling me on both sides of my waist, all the while staring straight into my eyes.

I sat up straight and got to my feet, pushed his hands away and started crying, just enough to make my voice wobble.

I turned and walked out of his office and out the door of the band room. I ran across campus, sobbing, not caring what anyone thought, to Mrs. Batey’s 9th grade language arts room.

Thank God for Mrs. Batey. She had us writing journals in class and at home. We had to turn in our notebooks once a week so she could see we were actually writing in them. If you didn’t want her to read a certain part, all you had to do was write at the top of the page, “Please don’t read.” She was the only one on campus I would ever go to.

When I opened her classroom door, Mrs. Batey looked up from her desk, her kind brown eyes peering over her little half-reading glasses.

At the reunion, I also learned that Skar’s fingers and toes lost circulation and fell off one by one before he finally died from diabetes. A thrill ran through my body. I had to practically choke myself to not giggle.

I’d seen Mr. Skar several times during the years after high school when I went back to some football games with old friends. I would say hello to him, and he would turn his head away as if I didn’t exist.

The first guy I ever stood up to—said No to—was gone from this earth. He couldn’t poke me or tickle me, or ignore me ever again. One of the pieces of my confusing scattered life fell into place.

At the dinner-dance on Saturday night at the downtown Hilton, all the popular girls wore short black dresses with their hair in curly updos. They danced with their high school sweethearts. I’d come alone to prove to myself that I was done with the shame I’d carried around for the twenty years since high school.

When they called out milestones—Who has the most children since high school? Who has the most college degrees?—it turned out I’d been married the most times (three) since we’d graduated. I didn’t stand up to be counted.

Later, I went out on the dance floor, all by myself, and shook my thirty-seven-year-old body to an Elton John song for all it was worth. My short blonde hair was spiked now; my tie-dyed harem pants felt silky and smooth against my legs. The sheer lavender floral overshirt with glass buttons twisted and flew around me and made me feel beautiful.

I could dance now. The girl who hated her body and only dared go to one dance in high school (because it was outside on the quad in the dark of night) had finally changed. I finally felt like maybe I just did belong on a stage.