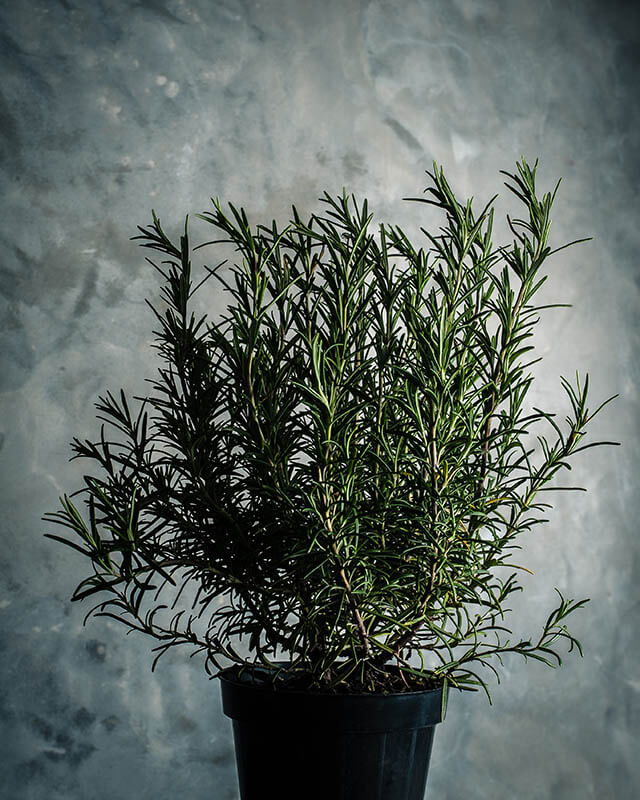 My mother’s pots of rosemary were tall, manicured

flecked with lavender drops of blossoms

the shape of small hearts or lips,

she’d send me outside to retrieve a stem each time

she baked a chicken: she pulled the thin skin away

from the bird’s flesh in one deft movement, a conductor’s

swift, intentional downbeat, she slipped her hands under,

gently, all the way up to the neck, the divet where

the bird’s head once was, a small chasm now,

she touched the shiny flesh with the tenderness

reserved for the newly born and the dying.

And then she’d insert the sprig – the Rose of Mary –

between the translucent skin and the damp flesh,

and in the bird’s cavity, where she’d stuck her hands

and pulled, working loose the insides – the duodenum

and the liver – into the vessel of the hen

she stuffed sliced lemons and rosemary,

and she reached inside and she rubbed it all down with salt,

her hand swallowed up to the wrist

and the Rose of Mary from her garden pots, sweet earthy sprig

that blesses the bride, hearty living stalk that anoints the dead.

On the last day of his visit, my son is at home

and I am in the city and we meet for brunch –

he drives from the south and I leave from the north –

we meet askew of the center, two circles concentric.

He sits across from me, black coffee in front of him,

and his skin in winter is lightly tanned, the color

of the inside of an almond, not the drupe

nor the hard celluloid shell, but the hull that holds the fruit in place,

the unborn to the umbilicus, the flesh unculled.

In twelve hours he will have gone and he will be

due east and resume his study of the universe and dark matter,

of the earth – right now the moon is at perigee.

When he moved through my body, his crown

the cosmos, I delivered him, he was already

in motion, he was already a force, momentum over time,

he was composing this moment already, this nexus between

his birth and his empyrean flight.

My mother leaves her tree up through

the New Year. When we were growing up, she was

scornful of neighbors who would haul their trees,

dried and bedraggled, to the curb on the 26th,

leaving it for the trashmen, as though they were in a hurry

to be done with Christmas, the extraction of a tree

She waits until after the Epiphany – after the Wise Men

have visited the Christ Child – and then, she says, she is

taking Christmas down, bit by piece, she dismantles

the holiday: the German-made nutcrackers with their

faces of storybook characters and animals

and Gorbachev, even, his birthmark high on his rounded

wooden head. She puts away the Christmas table:

the tapered candles, the runner and the china,

the tedium of flatware-polished silver forks and spoons

small and large, the butter molds and the leaded crystal glasses

where the Akvavit was poured, lives toasted. She saves her tree

for last, taking down each ornament

skillfully, methodically, and then, her tree stands,

it illuminates the living room, it is visible from the road

like the lights of a faraway village she visited, a younger woman then,

where she sleeps, now, the relics of a life stored in boxes,

the remains of a holiday put away.

Holly Kelso is a career educator, and has made language and literacy her focus for twenty-four years. Her writing appears in a variety literary journals and other publications. Holly resides in Boulder City, Nevada, the town that built Hoover Dam, where she teaches reading to middle school students.