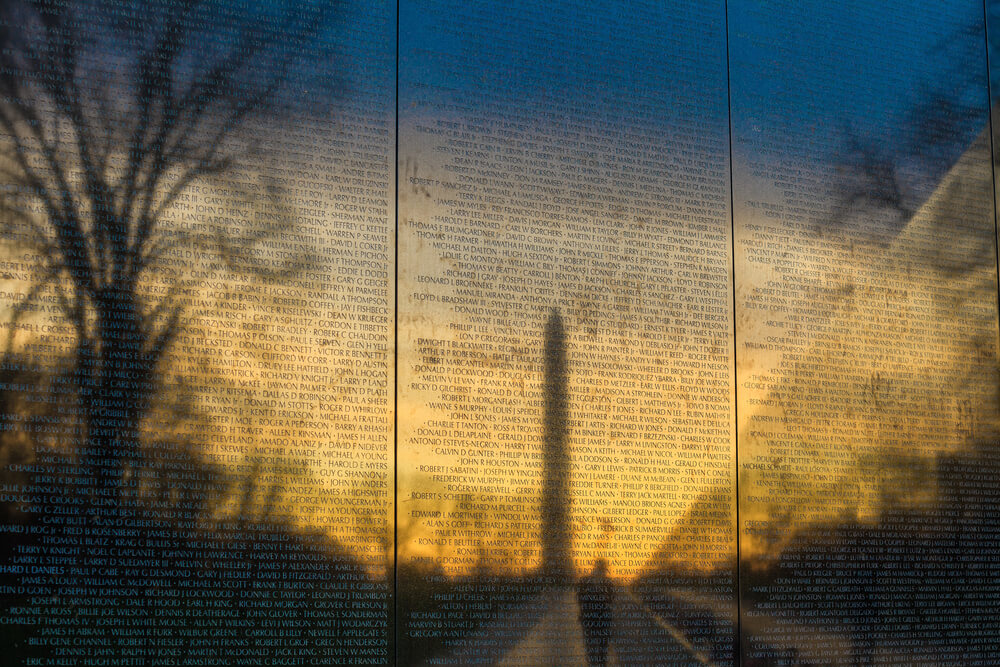 Three statues stand together at the edge of the tree line. Alert, deliberately calm, they look in the same direction, though not precisely at the same place. Boonie-rats. Grunts.

They are looking, always will be looking at The Wall: a great gash of black stone slabs in a green civilian lawn. A carefully shaped pile of black sand.

Visitors stroll along the white sidewalk in front of the panels, scanning index markers for the correct address of a particular grain of sand. The children among them ogle the panels quietly, speculatively, sensitive to the dreams that permeate the air. Children know well the stuff of dreams and can easily see that this is a place of no small magic.

A Visitor extends a slow hand to the panel, and with a forefinger, carefully traces the letters of a name, reciting to himself a date; in this case, 12 May 1966. Do you remember what you were doing on that day? Visitor does.

Shreds of time. Images that flicker like pages of a picture book blowing in a wind, back and forth, sequence random, some pages stuck together.

The equipment harness digs into his shoulders trench line. Visitor is panting, one foot braced on the low earth parapet. He jams a fresh magazine into his weapon, hits it with his palm, listening with a corner of his mind for the click that tells him it is properly seated, drops the empty magazine absently into the front of his sweat-soaked fatigue shirt. He scans the jungle around him with the speed of thought, then turns his attention back to thing on the other side of the trench.

His ears are still ringing, a symphony of deadly echoes from the explosions, and from the blatting of the machine guns. From behind him, out of the green-black shadows of the trees, a voice calls out to him in a loud stage whisper.

Of course he is. Visitor nods his head without taking his eyes from the thing in the trench. Fields could not be anything else but dead. The explosion had thrown him from the jeep and into the mud at the side of the road. Shrapnel from the explosion had buzzed past Visitor’s head, had ripped into the trees beside him. Their bullets had screamed at him as they passed, live, vicious things that whined past him, smacked and careened somewhere behind him. He had charged past Fields’ body, firing his weapon into the North Vietnamese.

Visitor stands at the edge of the low earth parapet in front of what had been the enemy position, now his position. He had bought it, exchanging the first twenty rounds he had offered for the trench and the body now lying there. They had already taken the life of Abraham Fields as down payment.

Unique odors hang thick but unmixed in the wet air, biting cordite, cool, dank jungle mud, blood still warm in the black puddle where Fields now lies. The false silence dissipates as visitor’s ears finally adjust. His body relaxes slightly as his ears create for him a picture from the sounds, and none of the sounds he can hear bears him death.

In front of him, the body of enemy soldier has been flung to the back of the trench, two small holes in his thin, naked torso. There is not much blood. Visitor shoots him once in the head. The others have fled into the jungle.

Military green shadows move with professional silence behind him. They lay Fields across the hood of his jeep. His black skin is gray now, almost white. His blood is great pool in the road. They take him away. Visitor will watch him die again, but later.

The convoy reforms, and Visitor walks to his place at the flank of the column, farther toward the front of the convoy than he had been before, beside the jeep, but farther into the jungle than he had been before. He pushes away the understanding that came to him the instant he saw Fields flung from his jeep, rips this understanding out of him like the page of a journal, files it in the back of the book to review later. He had been too far away to do Fields any good. Visitor was where they told him to be, but he was in the wrong place. He marks the error, but he will think about it again, later.

The convoy begins to move. He swings his weapon slowly back and forth, following the point of the muzzle with his eyes, looking out at the jungle. Looking through the leaves, past the trees, he searches for another target.

Visitor takes his hand from the panel and walks away. The other names will have to wait. One name is enough for today.

Fifty-eight thousand grains of sand to make sandcastles for the heroes. Heroes: that they were, that they wanted to be, that the Visitors want them to have been. Names in stone to go with the fading photographs and service ribbons, kept in places of honor or hidden in boxes, in fifty-eight thousand homes. Names in stone remind Visitors that their darkened visions have been made simple by the mortal passage of time.

To remind means to cause to remember, you see.

To remind, but never to explain why. Never why. Only when. Why? One day you went away and all we got back was a lousy piece of paper. And a name scratched in a rock.

Oh, but why? I watched you leave, and I will see it every time the acrid bite of cordite wrenches it from my memory. Time does not heal all wounds. Time turns pages.

Survivors grow old and die. Children grow up, and when that is done, so will the magic be done, because stone is only stone. Without dreams, The Wall is only another tedious list of names, another memorial in a city full of memorials: a black gash in the shallow depression of a green lawn, tended by three statues dedicated to the Veterans who participated in the Vietnam War.

Mark Carter spent several years in the Army. He has been a farrier, and a packer & guide in the Sierra Nevada Mountains, as well as a cross-country truck driver, itinerant field worker, and laborer. One of his short stories is scheduled to appear in the Spring Edition of Passager Magazine. He lives in central Idaho with his partner and a cat.