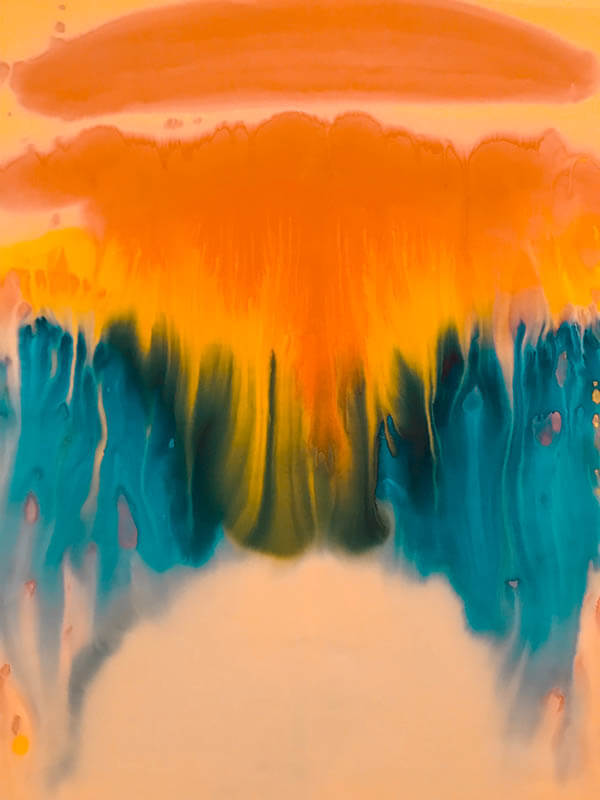 Black. Yellow. Blue. The painting in the hall showed a man, a woman, and a big yellow dog – falling from the Earth into the atmosphere. The dog looked so helpless as he fell with his legs spread out, away from green earth and blue oceans toward the blackened sky. The thick strokes of paint gave the images an added dimension – as if the paint was also falling away from the wooden frame. Even then, at the tender age of nine, I was most concerned about the dog.

Bench. Front door. White plastic radio. Our father walked in at about half past two to tell Sarah and me that our mother had died. He sobbed loudly, clutching the white plastic radio with the golden dial – the one we had loaned her so she could have music in the nursing home. Seated on each side of him on the mahogany bench in our formal front hall, we propped Dad up like bookends. I wrapped my arm around Sarah’s as we supported our dad and time seemed to stand still for the three of us. After awhile, not knowing what else to do, I asked Dad if I could return to my Saturday cartoons on channels 4, 5, and 7.

Angel. Popcorn. Mustard yellow bedspread. Later that day, my shrinking family and I curled up on Grandma Edna’s bed to watch a movie on our black-and-white TV. It was a holiday film about an angel, a bell, and a tall and slender man. The man kept trying to leave his little town for greater adventures in the big, wide, world. Something, or someone always seemed to get in the way. I tried not to feel bad about the relief I felt with Mom gone – relaxing together with my shrinking family. I saw my father laugh again, and my sister Sarah smile, as we tried not to spill the popcorn on the mustard yellow spread. Grandma Edna said if I watched much more TV my eyes would turn into squares. 😌.

Growing. Fading. Emerald green. When Dad remarried the following year, our family started to grow again. First a new set of grandparents, then a blue-eyed baby sister. And a black-and-white puppy my stepmom had picked out just for me. 😃 Then sister Sarah left and Grandma Edna faded away. A gradual misremembering caused by an Alzheimer’s Disease. At age eighteen I left my safe-sad home for college and emerald mountains leading down to the sea. The harbor glistened in metallic blue as the sea lions basked in the hot hot sun. I discovered a pretty and popular me. And a smart girl who narrowed her fields of study down from 4, 3, 2, to 1.

Bones and stained glass. Shifting sands. Shipwreck. Lichen. Stone. Working as an archaeologist on an English dig, I learned an entire life could be reduced to just teeth and bone. Somehow I found that strangely encouraging. It was more than the mark my mother had left. Whisked away in ashes as I stayed at home. Holding shards of Medieval window glass up to the sky, I watched religious and pastoral scenes in red/green/yellow/blue dissolve in the warmth of the Worcester sun. I recorded shipwrecks off the San Francisco Coast, woken from their slumber by rain and shifting sands. And uncovered prayer seats in Northern California hills, hidden by lichen and fashioned out of stone.

I moved so frequently during those years my father called me his “Goodby Girl.” All my worldly belongings fit neatly into one carload. As to my location? A page of addresses crossed out and rewritten in my family’s address book. Always in motion like a tumbleweed.

Boom. Crash. Billowing smoke. Waking up that morning like many others, I watched the Twin Towers coming crashing down. In an endless loop of video on a friend’s color TV. As people fell from buildings (helplessly, repeatedly) I was reminded of the painting in my father’s front hall. The one with people falling from the earth, in black, yellow, and blue. And I felt cold and frozen again like when Mom had died (needlessly, finally). But remembered that when evening fell we were a family again, though it seemed like our life should have been in ruins. So, as large buildings collapsed into billowing smoke, I turned away from that sad sad scene. Remembering Grandma Edna’s warning about watching too much TV, I drove into the mountains.

Black. Yellow. Blue. Much time has passed since those first uncertain days and I am no longer my father’s “Goodbye Girl.” A wanderer with one carload, and an address book filled with crossed out addresses. With a husband, a home, and a family now, I am rooted down. On our peaceful farm (our oasis in these troubled times) life has settled in. And when I think of the painting in my father’s hall: the man, woman, and dog in black/yellow/blue, I realize that this will happen to us all some day. A falling, a disappearing, a fading away. But I also know the calm will come again, like on that cold January day. The loss and then the reconstructing. Black (for New Mexico skies on a starry night). Yellow (for the Zia Sun), Blue.

Rebecca Grace Larivee grew up in the San Francisco Bay Area. She previously worked as an archaeologist in England, Washington, and California, as well the American Southwest. Rebecca currently runs a small counseling practice in New Mexico's Four Corner's region. Her works of nonfiction and CNF have been published in "Cause and Function," magazine, "AZ: The Journal of Weird Anthropology, and "Empty Mirror" press. Recently awarded a Connie Gotsch Arts Foundation Grant, Rebecca lives on a farm in Northwest New Mexico with her husband, Normand, and their lively menagerie of "critters."