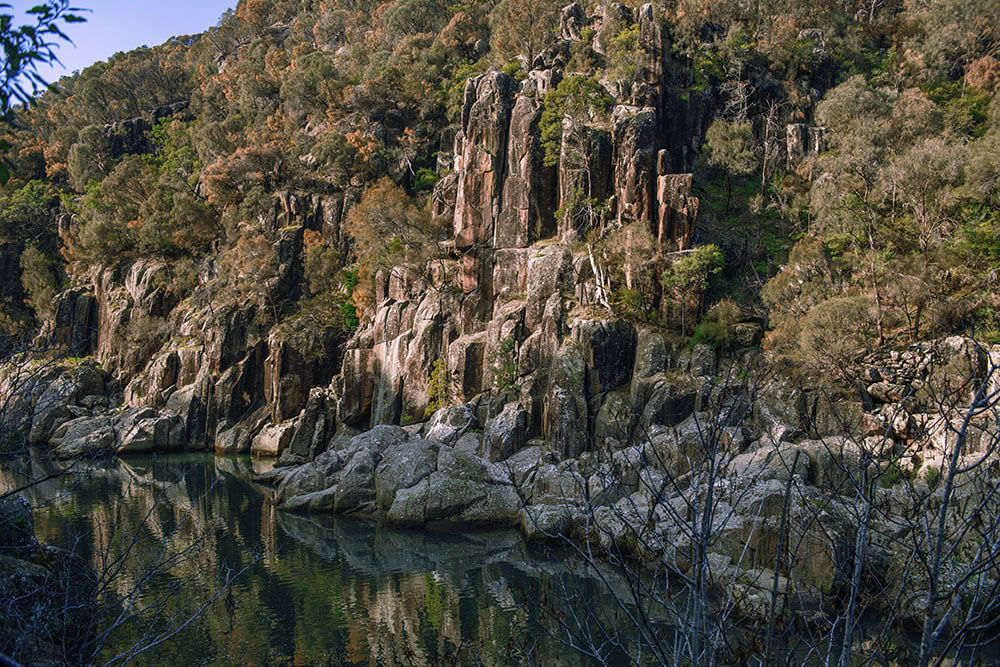 I often visit a special place not far from my home. Here I am revived, here I can observe, and here my soul feeds on nature in all its forms. I feel privileged to be able to call this place my own: Cataract Gorge in Launceston, Tasmania.

We owe the discovery of this unique site to explorer William Collins who, in 1804, ‘...observed a large fall of water over rocks, near a quarter of a mile up a strait gully, between perpendicular rocks, about one hundred and fifty feet high; the beauty of the Scene is probably not surpass'd in the world; this great waterfall or cataract is most likely one of the greatest sources of this beautiful river, every part of which abounds with swans, ducks, and other kinds of wildfowl.

At the time Collins was searching for a source of fresh, clean water for the early settlers to use; the gorge then became a vital link in the growth of the new settlement. Prior to this it is thought the aboriginal community was present in the gorge, using the water and perhaps food and shelter, but there remains little archaeological evidence. Some aborigines believe evil spirits occupied the gorge in order to protect their people and future generations, and aboriginal women in particular have felt uncomfortable upon entering the area, believing it may have once been a sacred site for their men.

The history of the gorge dates back hundreds of millions of years, to its volcanic and explosive creation. Deep beneath the first basin is a concentration of fault lines that coalesced millions of years ago to form not one, but three devastating earthquakes, giving rise to its creation. Local geologist Peter Manchester says, ‘You can actually see the cross-section of the movements of the faults on the sides, up near where the suspension bridge is, down the centre of the Gorge.’ These movements and fault lines have not been weathered away, he says, which explains how the current landscape formed.

Down the gorge, the South Esk River winds its way past Jurassic dolerite cliffs to the Tamar Estuary. And the cataract section was probably created some 10,000 years ago, also following a massive earthquake.

So why am I drawn to the Gorge? I am intrigued by its violent past; and the contrast of its serene waters and sheer rocky cliffs is dramatic and breathtakingly beautiful. I also feel a respect for those who walked before me, whose lives were not easy at settlement nor during the eons before. But the Gorge is a mecca for native birds and animals, and the chance of seeing its unique inhabitants again brings me here, time and again.

As I wander down through the southern entrance of this 192-hectare site, I spy a superb fairy wren on the branch of a shrub. I stop to watch him. His brilliant blue feathers match the cloudless sky with perfection, and he appears unperturbed by my presence as he goes about his daily preening.

I reach the ford at the first basin, where water gathers in slowly before rushing beneath my feet to create a second waterfall on the downhill side. It is here that water birds abound and ducks and ducklings, swans and cygnets are frequent visitors. And I am told that hidden beneath the waters of the basin is an aquatic wonderland of blackfish, long-finned eel, redfin perch and brown trout, to name but a few.

Occasionally, an adventurous Australian fur seal makes its way up the Tamar Estuary to sun itself on the cliff face above the Gorge. There it will stay for days at a time, feasting on eel. Today, however, only one lone cormorant perches on a rocky outcrop in the basin, his wings spread full, taking in the sun.

I take the path to the cliff grounds. In 1904 the local mayor noted that ‘strangers who visit them for the first time are lost in wonder and admiration of the beautiful scenery.’ The same can surely be said even still. I go right and climb even farther up through a forest of tree ferns that slope down sharply to the river, hundreds of metres below.

At the top two giant sequoias, Californian Redwoods, guard the entrance to a beautiful dell. One of these trees was planted in memory of prominent early residents William and Isabella Barnes who, in the late 1800s, gave this land to the city for the people of Launceston to enjoy.

The dell is a place of shelter and refuge for humans and wildlife, enclosed by oaks and London plane trees, along with gardens of blue, pink, purple and white hydrangeas, and azaleas and rhododendrons that bloom brilliantly in spring. An enormous native olive tree fans its branches out towards the centre of the dell, and beyond, amid a copse of bright green tree ferns, sits the ancient rotunda, the site of evening entertainments in Victorian times.

To my right a rock wall is submerged in dark green ivy which trails down to meet the grassy floor, partly laid in a carpet of bright green moss. I take a seat on a bench under the canopy of a large birch tree.

Today I am thrilled to see a pademelon nearby, busily foraging. I remain still, hopeful he will stay a while. The Tasmanian pademelon, also called the rufous or red-bellied pademelon, is just one of many mammals to be found within the Gorge, in addition to snails, spiders, frogs, lizards, skinks and even snakes. At other times I have seen wallaby and an occasional echidna, but never the shy nocturnal bandicoot that inhabits these grounds.

Recently, I was introduced to the Japanese art of shinrin yoku – or forest bathing. The Japanese believe the benefits of simply walking through a wild or natural area in a relaxed way can induce feelings of calm rejuvenation and increase our flow of energy. Now I relax onto the bench, take a few deep breaths and listen.

To my right I hear the loud ‘whip’ of a Golden Whistler, and I follow its flight to the lower branches of the olive tree. On the ground, a common blackbird pecks amongst leaf litter on the floor of the dell, discovers what must surely be a worm and flies off to its nest. I close my eyes and then, in the distance, hear the coo-coo of a dove.

A breeze sighs through the shrubbery and brushes my arms. I take another deep breath and as the scent of the forest envelopes me, I find myself at peace. But my contemplation is broken by a screech. Startled, I look up to see a peacock nestled in the branches of a magnolia tree. Peacocks are the most striking of the gorge birds with their iridescent blue-green feathers and long graceful tails. They were introduced early in the twentieth century as an exotic feature and now, sadly, less than a dozen remain; all males.

A rustling in the bushes reveals a curious peacock that makes his way slowly towards me. He stops a metre or so away and cocks his head, his eyes trained on me. I say hello and he moves closer, pecking at the moss on the ground before me. He seems completely unafraid. At last he wanders away, and I see that the pademelon too has left me, so once again I close my eyes.

Now I am aware of the crash of cascading water down at the ford and imagine it rushing down over the rocks that break the surface at the top of the South Esk River. There it begins its kilometre journey to meet the Tamar Estuary, between those impressive dolerite cliffs.

Eventually, muted voices tell me I am no longer alone. I open my eyes and watch the shadows of overhanging branches dance across the mossy carpet. Then, stretching, I rise and wander over to the olive tree. There, on a leaf, a pair of Harlequin Bugs is joined together in a strange mating dance, their brilliant red and black shells spectacular against the rich green of the leaves.

Following the rocky path from the dell with the river to my right, I cross a narrow bridge to reach a wire-fenced viewing platform overlooking the tranquil gorge. Once, further upstream, a fourth basin existed but decades ago it was dammed to become the Trevallyn Lake. Now, in heavy sustained rains, water released from the dam barrels down the gorge. I can still visualise the rapids from last winter as flurries of white foam spiralled up the cliff faces on both sides whilst masses of spectators looked on, cameras at the ready.

Now the vegetation has changed, and here sparse windswept scrub and trees with exposed roots hang from rocks metres above me. What a contrast to the lushness of the dell. I step around Dog Rock, one of the gorge’s natural rock features and pass a set of hewn stone steps heading up and a series of shallow caves. I wonder who created them – was it the first settlers or the elusive indigenous peoples. Naturalist John Muir said, ‘In every walk with nature one receives far more than he seeks,’ and I can’t help but think there is so much to this place that I have yet to discover.

Towards the end of the path, the majestic Kings Bridge Cottage is perched high above me in the cliff. Built in the 1890s, it was home to the gorge’s original gatekeeper. Now, there is no gate to keep and the cottage is home to an Artist-in-residence program.

From the earliest days of discovery, artists and photographers have rendered the gorge in a variety of media. Even in black and white the beauty of the gorge is evident in the proliferation of photographs that date from the 1860s. The cliff grounds, by 1904, were the most popular place to visit in Launceston. Following the introduction of colour photography in 1907, so many photographs were taken here that in 1912 the Town Clerk was forced to decree, ‘the Council does not permit photographers to canvass for business or sell photographs in the Cliff Grounds.’

In art too, the gorge is immortalised. John Glover, arguably Australia’s most celebrated colonial landscape artist, produced numerous sketches and paintings of the gorge including Tasmanian Gorge, and The Cataract on the South Esk River near Launceston, Van Diemen’s Land. But it is Gladstone Eyre’s watercolour The First Basin that captivates me the most. This atmospheric painting hangs in its heavy gilt frame in the Queen Victoria Art Gallery in Launceston.

In it, a woman sits alone in a rowboat just metres from the rocky shore. The water is dark and in parts rippled, the rowboat reflected in its mirrored surface. From beneath the tree-topped hills beyond, ancient dolerite boulders jut out at odd angles as if having suddenly risen from the basin.

This painting embodies all that I love about this place. Each time I come to the gorge I make new discoveries; changing foliage, other wildlife, unique sounds and smells. And I leave with visions and memories, and the desire to return.

As Marcel Proust said, ‘The real voyage of discovery consists not in seeking new landscapes, but of having new eyes.’

Penny Garnsworthy is a freelance writer from the beautiful island state of Tasmania, Australia. She loves to research and write, and is published in both the educational and commercial markets within Australia and overseas.