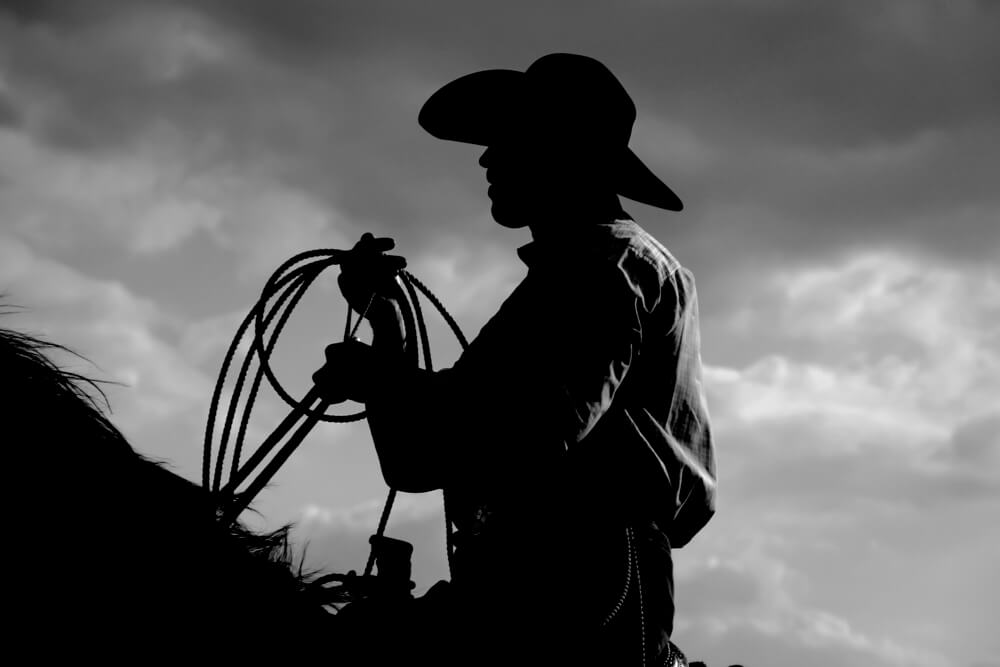 The Merrick house was on a hill so that, from the porch, you could see down past each farm and, on clear nights, the lights from Moravia. Large cottonwoods blocked the property from Route 11, but from the fields down south you could see directly up to where the home loomed above the town like a castle. If a stranger were to see Hazel standing on her porch, they might simply think she was surveying her property, looking upon her dominion of trees, grass, flowers and rolling hills like a queen looking upon her kingdom.

They wouldn’t be able to see the man riding his white horse along the furrows of Nate Leibengut’s freshly ploughed cornfield next door. They wouldn’t see his jeans, his denim jacket with no shirt underneath, and his deathly skinny body. His skin seemed vacuum-sealed to his bones. He wore a half-gallon hat upon his head, which he kept hung real low to keep the rain from his pale face.

The Cowboy came to her sometimes in different shapes and sizes, all comforting. If there was one consistent thing in her life, it was him. She’d seen him in her tea and in the soap and even sometimes the constellations, but this time it was different. He was both there and not there, like a two-dimensional figure in a three-dimensional world, and this paradigm shift of her reality could mean either one of two things. That he was truly real after all or that everything, including herself, was as fake as her hallucinations. That she had become a hallucination herself and become a citizen of the world of slow time.

If Ira were to see her there, he would look out at the field and see nothing but the fresh furrows and the storm. He would not see The Cowboy no matter how many times she told him he was there. And it wasn’t just that he couldn’t see him. He couldn't even entertain the possibility of his existence.

Ira would say there is no Cowboy and she’d reply with, then who has been there my whole life? And he’d say Hazel, it’s something in your mind. You know that. You know that.

Only Hazel saw The Cowboy because they were one and the same. She understood that in the opinion of her psychotherapist, her psychiatrist, her husband, and her husband's family, The Cowboy was a symptom of a larger disorder that they liked to label schizophrenia.

Yet The Cowboy was as real as the sun and the stars to her, omnipotent and constant, forever looming in every dark alley she walked by and every car she passed on the road. He was everywhere and everyone.

The Cowboy raised his head and looked up at her, and although far away, she felt his penetrating stare. Two deer in separate forests, aware of each other.

Then she felt his will to communicate. That subtle way she had heard his voice in her head. The first time she heard it was in the Sunshine Theatre over in Auburn. Her boyfriend, Craig, snuck her in to see Scream in 1996. When Drew Barrymore bit it, she didn’t look to Craig for comfort. She felt a presence behind her, turned around and saw The Cowboy in the back row of the theatre. He tipped his hat to her.

Her eyes, beautifully blue, blinked, and the man had pulled back the reins of his horse and turned around, going back from where he came, following the furrows with his head real low. It was always hard to process when he would appear, but it was even harder to process his departure.

She was alone now, and all the creatures of the world fell silent and time seemed to not only slow but cease to exist. The cicadas stopped singing. The birds stopped flying from tree to tree. The rats in the walls stopped running, and the bats that hung by their toes hadn’t a thought to disturb the rain.

The front door behind her creaked open, calling for her to enter the dimly lit house, the sound of her name being whispered from atop the staircase by a thousand mouths stuck in the walls, lips pressed against the cracks in the wood like they were drowning and desperately clinging on to any air they could find.

She turned her back on the country and walked inside, closing the door gently behind her and leaving the sound of the rain to muffle the sounds she was about to create.

Each step she took up the stairs was like climbing a mountain and her legs ached with contempt for the creaking floorboards, feeling the dark basement underneath looming there like a troll under a bridge waiting to grab her and pull her, kicking and screaming, into the darkness. Even after all these years, the basement of her mother’s house...it was like she never left. Her bare feet pressed into the old wood and it seeped into her pores and she had a thought to light a match and burn it to the ground so no one could trace her footsteps and neither she nor anyone else would ever have to go into that basement ever again.

Her wet hand glided along the railing, and the light from her mother’s bedroom guided her way, a lighthouse calling her to port.

There was the whispering again. She’d heard it before, late at night, next to her ear, and in the shower when her eyes were closed and she felt breath on her neck. One time she’d opened her eyes and saw an eyeball staring back at her from inside the showerhead. “You’re new,” she’d said to it.

“The house,” she whispered to Ira over the phone as she looked at the studs on the couch transform into blinking, gouging eyeballs. “It’s watching me.”

“Do you need to come home?”

A bubble of spit appeared in the corner of her mouth as her eyes widened and her ears opened to the secret whispering and glaring eyes.

“We made a deal, Hazel. Do you need to come home?”

“She needs to fucking die.”

“She will,” she had said with a little bit of venom. “But for now she needs me.”

The little mouths, lips, and eyes in each crack and imperfection of the house—they usually tormented her as soloists, but now they sounded like a chorus leading her down the hallway step by step and creak by creak. A symphony written just for her. All for her.

“All for me,” she whispered.

Once in the doorway, the whispering grew even louder and she looked down at the floorboards to see The Cowboy’s face underneath the wood moving his lips, his black eyes full of galaxies spinning and spinning.

She’d heard Neil Degrasse Tyson say on a NOVA special that a galaxy only makes a complete rotation once every billion years and that the cycle isn’t noticeable and can only be quantified by mathematical estimation. It shocked her to hear that because she has always been able to quantify such a rotation.

It made her feel special that she paid attention to a subtlety missed by every other person on the planet, and she knew those spinning starry eyes beneath the floorboards were her guardian Cowboy giving her his blessing.

And sometimes, when she would look into Ira’s eyes and all that stared back were mud puddles, she wanted to leave him. Just pack up what little she had and look for The Cowboy with the galaxy eyes that defied the laws of physics. Turning all for her as if the universe offered out a hand and said this is why you are alive.

Ethan Steers has an Undergraduate from Purchase College in Theatre and Performance and is currently in Syracuse University's Graduate program for Clinical Mental Health Counseling.