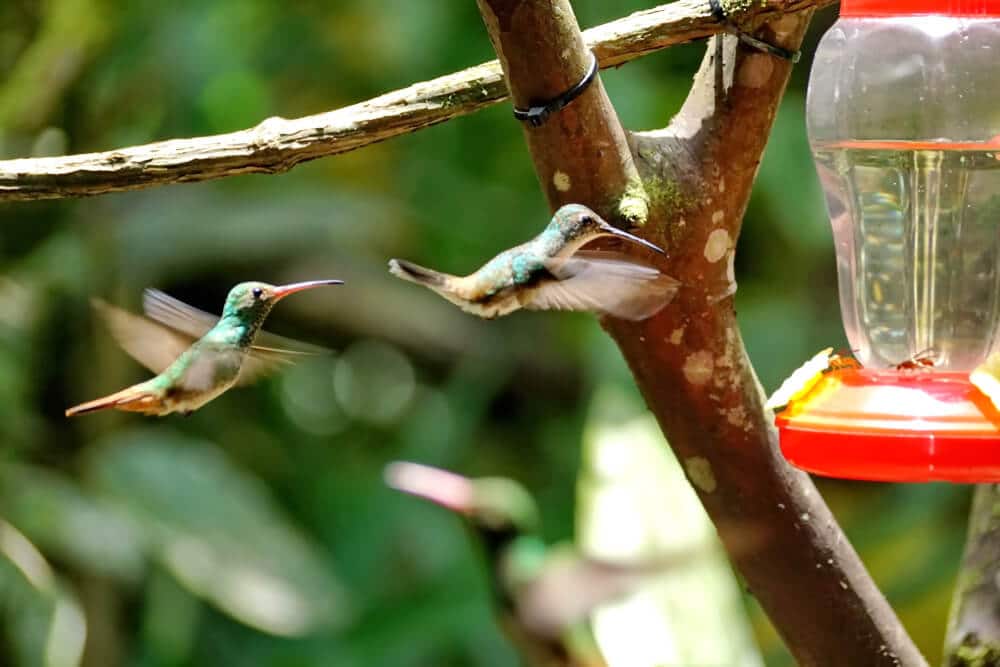 This is my first “solid” memory, by which I mean that I know it happened. I can grasp it firmly with my mind and replay it like an old filmstrip – bad quality, perhaps, but largely intact. It was not a dream. It was not something I saw on television and absorbed. It was not otherwise altered by the unstable physics of childhood recollection.

I remember tree trunks, briar patches, handmade fences, dry yellow grass. Hummingbirds shimmer and dance, chittering to each other in great swarms around hanging feeders filled with artificially colored sugar water. The sun returns from behind a passing cloud, casting beams of red and green light through them and onto my face and hands, on the walls of the house. There is distant commotion inside: a clanking of glass and metal, my grandmother singing Patsy Cline from the kitchen. The box fan above my head rattles in the ill-fitting window frame it has been placed into.

Dogs are sprawled in the grass of the yard, portraits of lethargy, speckled coats shining in the sun. I am tempted to leave the shade of the porch and go to them, press my face against their upturned sides, feel the accumulated heat there until my cheek burns. But I won't get the chance. The mail carrier, Faye, pulls into the driveway, her boxy red Subaru filled to bursting with envelopes and parcels to be delivered. She drives her own car to deliver the mail, normal for the time and place: a tiny, rural town, safe from the eyes of the fast-moving world sliding up and down the interstate too quickly to notice us. It is 1980. I know nothing else.

The dogs are up, even as the car begins to slow, fully awake and surrounding her, announcing the arrival in a chorus of happy barking and raised tails.

My grandmother exits the house into the daylight with a squinting grin. Her face is not yet lined by age and troubles, her hair still black. The damp dish towel in her hands is bordered with fat little owls. She loves owls; they dominate the house's décor in soon-to-be-outdated shades of brown and rusted orange.

"Well, hello stranger," my grandmother says. Her demeanor is so kindly, so infallibly welcoming that it is impossible to tell if it’s genuine, if she’s truly in the mood for company. That's how good she is. Never crack. Never show anything but that smile, that warmth that you wish the world gave back. It never does, not nearly enough for her, but she’ll never stop trying.

Faye does not smile. She does not get out of her car. Her face says she'd kill every last dog if she could.

"Hi, Wilma." Her voice is dull, mannish, unintentionally harsh as she greets my grandmother. A long life of work and cigarette smoking has supplanted the original sound of her. She holds out a thin stack of envelopes from her car window, unusual only in that they are already torn open. Two are white. One is piney, Christmas green.

"Oh. It certainly does." My grandmother takes the envelopes and laughs; a clucking, rehearsed sound that says “let it go” to my experienced ear. They are both careful to avoid looking at me. The sun seems no less bright than in the moments before, but the air feels somehow heavier for the exchange.

I wait for the inevitable would-you-like-some-coffee that comes after every car that parks in our driveway. Faye wastes no time, though, and my grandmother does not offer, even though she is technically family – a distant relative-in-law of some capacity, like so many that come to call. Some other weight, though, something I can’t see, has overtaken the moment. My grandmother wants her to leave. Her smile doesn’t waver, but I know enough, even at my age, to know what she’s thinking. Her hands are already on my shoulders, gently turning me away from Faye, from the dogs, from the yard and the sun, in the direction of the shaded front porch, to the house, in which something will be said but just between the two of us. In private. I know this already. It’s how she deals with everything, with everyone.

"You have a good day," Faye says, and if she meant it who would know? Her eyes, nearly obscured by the photochromic lenses she wears in every memory I have of her, meet mine for an instant. It might be a look of sympathy she gives me, the only pity she’s capable of offering. It could have been something else entirely. Of course, she would have known all about my situation. Half-relative or not, she'd have heard. Word travels at the speed of sound in small towns, in glaring contrast to the slogging slug's pace of everything else. The seasons, even, take their time in the farmlands.

Faye’s car pulls away, grumbling up the driveway and down the main road, the paved boundary of my existence. The dogs escort her halfway, then return to their lazy posts in the yard. Excited insects hum and buzz through the air around them.

My grandmother leads me into the house by the hand. She seats me on the floral print couch that remains fixed in my memories, though it was gone by the time I was in school. She seats herself across from me in a wicker-backed rocking chair that she has pulled from its home in the corner. I’ve never seen it moved from that place before. She says nothing, at first, and her eyes do not meet mine. A pall, a white shadow of worry, clouds her kindly features. The sight is enough to pierce my heart, even then.

I look at the envelopes, hanging loosely from my grandmother’s sun-burnished hand. Rows of up and down lines, like endless chains of M’s zigzagging over the printed addresses and images in place of words I don’t know how to write, on letters already mailed and opened. A plea written in a nonsensical script known only to me and one other: the woman I tried to send the letters to, hoping she’d know what they meant. The woman whose face remains absent from my earliest memories, though images and sensations, like trails of colored smoke, come to me in my quieter moments. Brown hair and a pale blue nightgown on the other side of the bed; a familiar-yet-unfamiliar voice both stern and musical, laughing above me; a crackle of driveway gravel and a wisp of dust like the small line drawn to mark the end of a chapter.

My grandmother sees me looking back and smiles, quickly but too late. I've seen past the mask, if only for a moment. She was afraid of this. She feels guilt, and other things I am too young to decipher. She'd hoped the separation had occurred when I was young enough to simply not remember. Easier that way, for everyone.

We sit in silence, for a second or for an age – time seems to lose its grip on the moment. The train is crossing the tracks at the far end of the property, a clanging, uneven song that announces the afternoon. I can't tell if I've done something wrong, broken some rule I was unaware of. It's so hard to tell what is wrong and what isn't.

She hesitates. Her throat flutters as the words are formed carefully.

"It took more love for her to give you up than it would have to take you with her."

Her voice is deliberately soft – tremulous and careful. It saddens her to say it. The song of a wounded bird that sings to give itself comfort. As though a misuse of tone will fracture the unseen barrier that protects that place, that keeps us content and together.

The words will be repeated many times throughout my early years, as though rehearsed. As though read from a prompt in her mind.

Her hand caresses my hair, the same color as her own, and she returns to the kitchen. The house stays silent for a time, and then her singing fills it again. The electric fan, though it never stopped running, resumes its whirring. The hummingbirds return to feed.

The volcanic mountain in the north of the state has just erupted. The sky is still clear, but soon – in a day or maybe two – it will darken. Quiet black rain will fall, fine but everywhere, filling the air with a firework smell and coating the world with ash, with a film of grayish grit that will last until the rain finally washes it away.

Dustin Hendrick is a writer of fiction, nonfiction, and screenplays. His first published work, a collection of essays titled "Where to Begin," will be released in November 2019. He lives and works in Portland, Oregon, with his husband, Nathan Pacyna, a filmmaker.