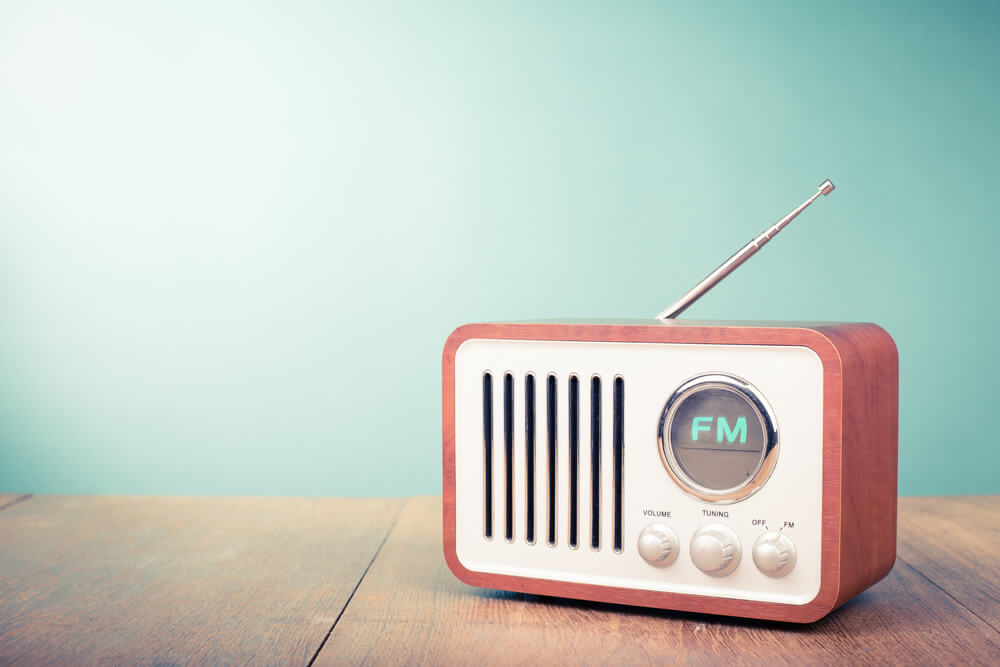 In 1974, my mother and Richard Nixon developed thrombosis. By that time, the old radio was broken, and she relied on a square transistor about the size of a jar. First Nixon resigned. My mother dialled into the news to hear his crackly yet smooth voice: “By taking this action, I hope that I will have hastened the start of the process of healing which is so desperately needed in America.”

We desperately needed healing. Then he developed thrombosis. My mother’s was worsening. She already had varicose veins. Gnarly blue arteries clustered on her calves. Before marrying, she had been a nurse. Her legs never recovered from long days, always on her feet on old hard floors. The Avon lady sold support hose, which helped, but of course things got worse. And now, she and Nixon were both in bed with no sign of getting up. The transistor spoke to her, and she prayed for their health, forgiving him all his sins. She and the president with this unbreakable bond.

Our first radio looked like an antique clock, not the tall grandfather ones. It sat on the counter with a round red face and green plastic shoulders off to each side. A cheap thing purchased just after they arrived. My parents didn’t bring a lot. Europe runs on a different current, so everything electric was from this side of the ocean.

After the war, refugees spilled out of their countries, thrown out by war and poverty. We had no such excuse—but it happened anyway. My mother withdrew money slowly for months, so no one would get suspicious and think there was a run on the bank. When my grandmother discovered the plan, she was furious. Taking your family to a new world where you knew no one was folly. The plan was a house of cards.

In the early days, my mother turned on the radio only to hear the news or the weather when my father was late and might be caught in a snowstorm. Otherwise, the house was quiet, unless you consider a dust mop or a window sliding open noise. When the Dad’s Cookie Company held a contest, she might turn on the radio to hear the winning numbers. While she waited, Hank Williams and Johnny Cash called out, because we were out west. The rest of the time, she preferred her Danish thoughts and didn’t want English silencing her inner words.

She and the house became synonymous. She embodied the space. The scents conveyed her essence. Apricot marmalade. Ironed pillowcases. Floor wax and baby powder.

If your mother left the house, you may not understand. Did your mother put on a uniform and go out the front door to cook hamburgers for strangers or sell cosmetics in the mall? Did she lace up her work shoes with determination and hope? My mother couldn’t do that. She barely knew the language and had nothing like a uniform. She had only two kinds of outfits: home and Sunday clothes. The only place she went was church, and my father drove us. He bought the groceries and ran all the errands. And her eyes often teared up. Not right for speaking to customers. So, she stayed inside.

Her sphere stretched beyond the actual frame of the house to include the garden and its perfumes. In the spring, she dug up the earth, releasing its powerful scent. She disturbed the worms and ants that navigated the black powder. She cut knife-sharp rows with her hoe and lay the seeds evenly in the dirt, exactly an inch apart, the same way she used measuring cups and teaspoons in the kitchen and counted minutes and hours. Those were the orderly moments.

The new seeds would flourish—green stems pushing aside the dirt and showing themselves to the light—bursting with life alongside the peonies and grass and lilacs.

As a newborn when your eyes first open, the world is blurry. We grab onto hard fixtures, curl up on our crib mattresses and suck our fists, tasting the soggy knit of a sleeve and becoming accustomed to the clean smell of powders and soaps. Sounds are incomprehensible like cries from a cello. Slowly we learn to touch and distinguish. But we have no way of identifying the irregular or out of place. All we have is this, whatever it is.

My mother held me close against her soft breasts. I could hear her heart pounding. That ancient rhythm always restores us. Most of the time, I felt her thoughts and sensed her listening to the other dimension just beyond, as though a different radio were playing on the other side of an invisible curtain. I knew there was more than we can see. The world doesn’t stop with the physical. The universe is magical and complex. My mother wanted to hear a butterfly’s wings, comprehend the thoughts behind mysterious eyes and reflect on memories that don’t make sense. But over time, the other radio on the other side of the invisible curtain started to sound like constant rain. In her world, there was a steady downpour. Always there. Even on nice days, she sensed the sky darkening. She could hear the thunder yelling, as the heavens opened up. It was horrible and difficult.

By 1974, the old red and green radio was broken, so my mother listened to the transistor to follow Nixon’s thrombosis. She had learned to read English by then. There was no longer any clear distinction between her thoughts and those that originated outside her. It was a jumble. In the Catholic Reporter, she read about the pending beatification of Anne Catherine Emmerich and asked my father to order The Complete Visions of Anne Catherine Emmerich, three volumes, illustrated. Catherine Emmerich was born on September 8, 1774, exactly 200 years earlier. What goes around comes around. She was a German nun who saw and relived the life of Christ. The Virgin Mary put thoughts in her head. For the last twelve years of her life Catherine Emmerich was bedridden like my mother.

Emmerich and my mother and her visions. After The Complete Visions arrived, my mother no longer listened to the radio but instead channelled a full-colour screen. Emmerich invited her into heaven. Through the volumes, Emmerich shared everything she saw. The visions of Catherine Emmerich lifted my mother’s spirits. I could sense their healing power. My mother forgot about her thrombosis. In this earthly dimension, she could barely walk. Each leg from the knee down was blue and swollen as big as a paper grocery bag, but for the first time in many years, the gray clouds weren’t casting shadows, and light shone from her face.

But after a time, she again heard the other radio blasting from behind the invisible curtain. The dams broke and volumes of water rushed toward us at a dangerous speed. All we could do was hang on despite the onslaught of waves. The wailing voices of the damned blared at her, drowning out all her thoughts. I tried to walk into her mind and say it’s impossible to hear the screams of hell. I wanted to hold her head, place healing hands on her skull, so all would stop, but there was no consoling her.

On August 9, 1974, Nixon resigned before being removed from office. In the Catholic Reporter, there was talk about Anne Catherine Emmerich becoming a saint. For Thanksgiving, we ordered a preboxed meal from a hotel. I can still taste the salty turkey skin rubbed with poultry spice—some sick combination of sage and old nutmeg. The potatoes were dry rosettes. She joined us for about ten minutes. I tried to comb her hair, then she wheeled herself back to bed.

In another memory, the sun is bright. Either it’s January when light jumps off snow in a fierce, blinding way or it’s autumn when wind has stripped leaves from trees, and the branches can’t block the solar glare. It’s probably November. It feels like the windows have just been washed, but I can’t imagine her doing that. One of her peculiar traits, though, was the ability to sanitize and sparkle, so perhaps she got up and polished the glass. It is bright and the sun’s rays are strong and my father’s face is perplexed, because denial is no longer possible. And then there’s the alarm of her screaming, loud and then moaning and then loud again, night and day.

“We need to call an ambulance,” I say, because I sense he wants a solution. I make this suggestion, even though I am betraying her. She and I have a tacit agreement that I will always protect her from the authorities who don’t believe in other dimensions. My father lifts the heavy black receiver and presses the 911 buttons. Soon, paramedics strap my mother, still in her flannel nightgown, to the stretcher and rush her to the hospital emergency.

My mother was named after an ancient goddess of the sea. She was born by the ocean and moved to the prairies where the grass barely grows and the sky is still. Perhaps she was simply misplaced. Her spirit refused to settle because she didn’t belong away from water among hay bales and fields of yellow. Here she had no magic and was powerless to stop the torrent of storms that refuse to listen and instead rage uncontrollably.

The General Hospital gives us a pamphlet titled, “Information on Electroconvulsive Therapy for Patients and their Families.” Right on the cover it says, “Electroconvulsive Therapy is called E.C.T. for short. It is often referred to as shock therapy, seizure therapy or electrical treatments.” It tells us that E.C.T. is a minor surgical procedure. An injection puts the patient to sleep. A muscle relaxant paralyzes the body. The psychiatrist administers electrical stimulation through electrodes placed on the head. The electricity produces a barely discernable seizure. Soon the patient returns to the world. There are only minimal side effects, usually.

All we can do is pray. Fold your hands. Let your palms touch, so you can channel the chaos and the current can run through you.

Terese Brasen is the author of the novel KAMA, published March 2016 by Outpost19. KAMA is a feminist novel that explores the Viking trade of slave women in tenth-century Europe. She is a graduate of the Pan-European MFA in Creative Writing from Cedar Crest College in PA, where she studied with author and educator Fred Leebron.