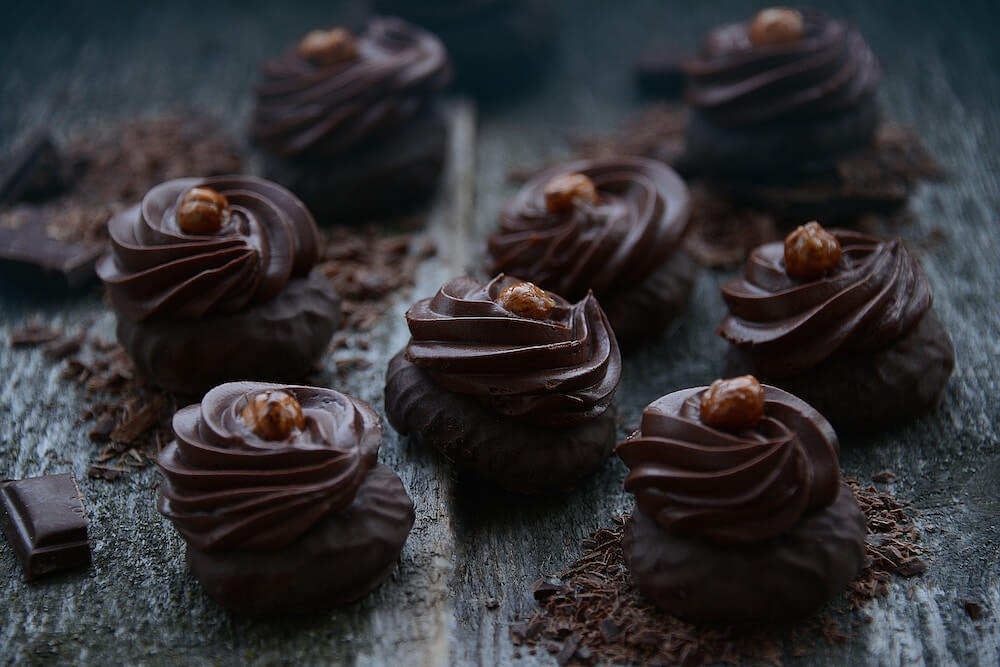 As a seven-year old, my criteria for culinary perfection was the ability to make macaroni and cheese and graham-cracker-white-icing sandwiches with so much icing it squeezed out the edges of the cracker when you bit into it. My mom made good macaroni and cheese and graham-cracker sandwiches. And fudge. When she made any of these, she never used measuring cups or spoons. These were her signature culinary achievements as far as I was concerned.

After we’d been living in Bukavu, in the Belgian Congo, for a few months, my dad was invited to dinner at a customer’s house. My mom was nervous and excited.

This was the first social event they’d been invited to.

“What am I going to wear? I don’t know how they dress for dinner here.” She looked down at her shirtwaist dress. She was wearing ballet flats.

“I wish my French was better. All I really know is a little Swahili, which won’t go over well with the Belgians,” she said. “And there’ll be rich French food — fattening food. I’ll have to go on a diet before the dinner, so I can eat.

“Do you think they’re finally accepting us? What an opportunity for your career.”

My mom stopped and looked at him.

“I wasn’t invited?” she said. “Do they know you’re married?”

My dad put his arm around her shoulders. “Hon, I’m sorry.”

“Did you tell Henri you have a wife?”

“Yes, I did,” he said, and squeezed her shoulders. “He knows I’m married and have a family.”

My mom blushed. “What kind of people do something like that?”

“This is just the way they do things here. They don’t mean it as a snub. Besides, it’s a business thing.”

My mom disengaged herself from my dad’s embrace. “Will his wife be there?”

My mom turned around and left the room.

Neither of my parents were well versed yet in the importance of dodging an issue to protect the other’s feelings, to head off the possibility of future battles and grudges. To practice compassionate deception.

The night of the dinner, after my dad had left, my mom called my sisters and me into the kitchen.

This became a ritual. Whenever my mom was hurt, sad, or depressed, she would round my sisters and me up. We’d go to the kitchen and watch her make fudge.

She got out the Revere copper-bottom pot and dumped cocoa powder, sugar, and butter into it, and cook it on the stove. She mixed the hot sticky ingredients with a wooden spoon and then spread it in a square baking pan.

That night, and other nights — way too many to remember — my mom, sisters, and I would get jacked up on sugar. We’d shit-faced on fudge. It would be after midnight before we could sleep. But my mom would lie in bed, eyes wide open, staring at the ceiling in the dark. Eventually, she’d doze off.

Being dismissed, being relegated to the sidelines, being overshadowed by my dad, happened a lot to my mom overseas, and she never got used to it. It hurt her feelings. It embarrassed her. She came to resent my dad. She became bitter.

She missed her family back in Ohio. She missed pizzas with everything but anchovies from Zavarelli’s. She was hungry for a cheeseburger and fries with a chocolate shake from Heggy’s, a small diner in Canton, that had wooden benches and small juke boxes on each table, the kind with pages that flipped when you pushed the buttons. She was hungry for a sloppy hot fudge sundae with peanuts, whipped cream, and a cherry on top, not the Belgian equivalent, a dame blanche — two perfect scoops of vanilla ice cream topped with a delicate wafer, served with a side of warm bittersweet dark chocolate syrup in a small silver pitcher.

“And Belgian chocolates,” my mom said. “Everybody makes such a fuss about how good they are. Wait until we go home. As soon as we get back to Canton, we’ll go to London’s and get a big bag of their cream-filled chocolates; vanilla, raspberry, coconut, not liquor.”

My sister and I were with my mom on this. Why would anyone put liquor in candy? Why would they use dark bittersweet chocolate? Why couldn’t they just let them be sweet? The Belgians took all the fun out of eating chocolates.

My mom missed her friends from Lincoln High, and Friday night high school football games. She’d played the coronet in the band. Sometimes, when my father was gone on another long business trip, she’d make fudge and pull out her high school yearbooks, student newspapers, and photographs.

We sat on the floor, ate fudge, and looked at them while my mom told us stories about the people she knew. Like Sticky Glue, a boy in the band who had broken her front tooth while she was drinking from a water fountain.

“He was horsing around and fell into me. Sticky was always goofing around. But he was a nice guy,” she said. “His real name was Richard, but we called him Sticky Glue. I don’t remember why. Wonder what he’s doing now?

“This is Eleanor,” she pointed to a picture of a girl with braces on her teeth. She was wearing a dress with a Peter Pan collar and she had a hairband on. “Eleanor didn’t want to crease her shoes, so she walked flat-footed.”

My sisters and I looked up at her and frowned.

“Like this.” My mom stood up and clomped around without bending her feet.

“Why didn’t she want to get wrinkles in her shoes?” I asked.

My mom shrugged and sat back down. “I don’t know. Maybe she wanted them to look new all the time.”

She showed us her senior picture in the 1946 yearbook. She posed at an angle and looked straight into the camera. Her hair was parted in the middle and turned into soft curls and waves that framed her face. Her eyebrows were pencil thin and she wore dark lipstick — probably red. Next to the picture was written, One of our blondes .. lucky girl ... energetic. There were a lot of signatures from her classmates on the page.

She’d been in the Senior Class Student Council and the Friendship Group. She’d been the president of the Biology Club.

She pulled out a stack of black-and-white photographs.

Most of them were of my mom in satin formal dresses, some of them gauzy and off-the-shoulder. In all of the pictures she had big, elaborate corsages pinned near her face, and she stood next to boys who looked nervous. But my mom was smiling. She beamed in every picture.

“I had a good time in high school,” she said, spreading the pictures out on the floor. “So will you girls. You’ll have boyfriends, go on dates, go to school dances, and football games. Just wait.”

My dad had a gift for learning languages. He was fluent in French, and eventually Portuguese and German. He spoke all of them so well that he was often mistaken for being a native of whatever country’s language he spoke. My mom had none of these talents. She knew enough Swahili to hold simple conversations with our Congolese servants and their wives, but her French was halting, and she never lost her Midwestern accent. The Belgians in Bukavu spoke so quickly my mom couldn’t keep up, and they refused to speak English.

Most of them were also blunt about their disdain for Americans, and that extended to all of us, not just my mom.

“Je n’aime pas les américains … I don’t like Americans,” Mademoiselle Peron, the headmistress at L’Athenee Royale de Bukavu, told my parents when they enrolled my sisters and me there.

Even my mom understood that. But it was the only school in town, except for the Catholic convent, which, for my Protestant parents, was out of the question. So, we all sat there and endured Mademoiselle Peron’s insults.

The boys and girls at L’Athenee were separated, taking their lessons in different wings of the school. We never had contact with each other.

Years later, after we’d left Africa and were living in Istanbul, Turkey, my sisters and I went to the DODD — an American Department of Defense Dependents school. It was for children of American military personnel stationed in Istanbul, but, even though we were corporate brats, we were allowed to attend. I was in the ninth grade, Leslie was in the seventh, and Victoria was in the fifth. Miss Calhoun was Victoria’s teacher.

Miss Calhoun was a tall, elegant African-American woman who rarely smiled. She was strict, but fair. She was also a good teacher, and her students loved her.

Miss Calhoun and the teachers of grades three through five planned a student, parent, and teacher get-acquainted event that would be held in the school cafeteria. The mothers were asked to bring food — it would be a potluck affair. My mom decided to bring her signature fudge.

The day of the get-together, the kids raced around the room, screaming for the sheer joy of being kids with no class. The adults gave up trying to rein them in and concentrated on each other and the table of food.

My mom saw Miss Calhoun eyeing the fudge, so she made her way over and introduced herself.

My mom smiled and said, “I make all the girls’ clothes. It’s not easy to find children’s clothes here.”

“Well, you do a beautiful job. Victoria’s a lucky girl to have you as her mother.” Miss Calhoun turned around and looked at my mom’s fudge again.

Miss Calhoun picked up the smallest piece and took a bite. She raised her eyebrows. “It’s rather sweet, isn’t it?” she said.

Rebecca Jung is a writer and poet who lives in Pittsburgh, Pennsylvania. Her work has been published in literary magazines, including: Sky Island Journal, Memoir, The Impetus, Pittsburgh Post-Gazette, Pennsylvania Review, Evening Street Review, Postcards Poetry and Prose, Not Very Quiet, The Write Launch, Sad Girls Club Lit, Flumes, and Purple Clover. Her work has also appeared in two books: Along These Rivers: Poetry and Photography from Pittsburgh; and Burningword Ninety-Nine, A Selected Anthology of Poetry, 2001-2011. She earned her B.A. in English Writing from the University of Pittsburgh, and a B.A. in Art History from Kent State University.