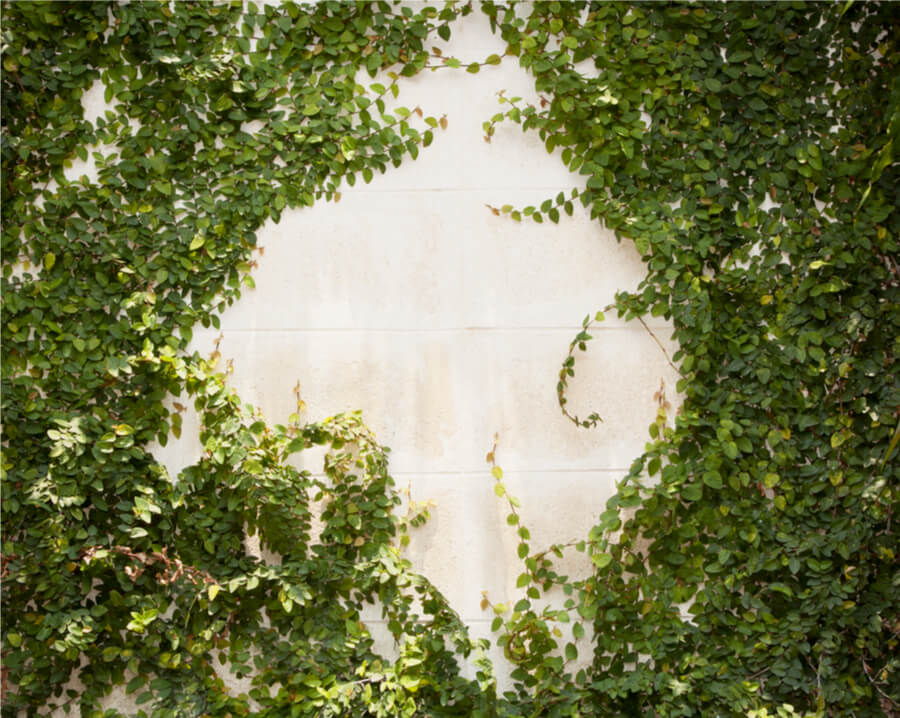 When she is seven, home is a suburban mansion on the outskirts of Manila. It has a deep back garden, aggressively green, encircled by a high stone wall overlain with lush leaves and serpentine vines. Right next door, adjacent to their property, barricaded back by the rough rock, is an empty lot—abandoned after its initial clearing and left to the mercy of tropical flora and fauna. She remembers the next-door lot as wild, entangled, strangely free, its own impenetrable jungle. The closest she comes to exploring it is peering over from the garden, her head barely clearing the wall after clambering up as high as she can manage on her side without falling. The rampant chaos she glimpses feels like peril and risk, the inscrutable and the forbidden. But even her own more manicured garden holds mysterious dangers. Warned repeatedly by adults about disease-carrying insects, the children constantly watch for mosquitoes spotted with silvery white whenever they play outside on the climbing structure or the lawn. “Malaria mosquito! Malaria mosquito!” they shriek, fleeing to the house and into the shelter of the indoors.

On one particular day, it is muggy and overcast, oppressively humid. Her father is at the office; she is back home from first grade. She, her mother, and her sister join her baby brother and his Filipina nanny upstairs in the nursery room. While her mother plays with the baby and she and her sister draw, the nanny, in her starched white uniform, her hair a blunt black bob, folds laundry and entertains them with tales of the Japanese invasion. The nanny tells of families fleeing massacring soldiers by walking deep into the rainforest and digging holes under bamboo trees to hide for days and weeks and months. Of eating rodents and insects. Of capture and torture. Of devastation and death. Although she listens, intrigued, and will remember the nanny’s words, she does not understand them. She only knows that what she hears makes her uncomfortable, vaguely anxious. The sadness, the cruelty in these stories, are new to her.

Later that afternoon, she runs downstairs to fetch more drawing materials and it is then, as she glances out the window, that she sees it. It is huge. At least a full meter long. Its clawed feet, its bowed legs, its tail and torso and throat, are massive. It is a snake—a lizard—a dragon. As she watches, paralyzed, crayons and paper clutched tightly in her hands, the creature slowly, steadily, slithers up the shrine to the Virgin Mother in a sickening parody of Mary crushing the serpent, reaching the bare feet first and the carved folds of the gown, then the outstretched arms and the enigmatically smiling face, and finally the modestly veiled head. At last, still staring, transfixed by a sort of terrified fascination, she sees its thick scaly tail slide over the wall and disappear into the wilderness next door. She cannot know it then, but the dragon in the garden, the monster in her own backyard, will forever embody in her memory the ugliness lurking in human nature, latent even in what should be the most secure of places and the most innocent of relationships.

One night they have a guest over, a colleague of her father’s, American like them, working for a couple of years in Manila before returning home to the States. Their guest has arrived for the evening with his wife and two adopted boys—the older one around seven, her age. Contrary to what she is accustomed to seeing today—U.S. couples adopting children from all over the globe, Chile and China, Ethiopia and Haiti—these boys are American and, what really strikes her then, white, whiter than their adoptive parents, towheads, flaxen blondes with see-through eyes and pale lashes.

She is eager with anticipation—they rarely have dinner parties, even in the Philippines, where they have two live-in maids, a baby nurse, a chauffeur, and a gardener for a house so gratuitously large that five of the rooms upstairs are permanently closed off, cavernous and musty. Service is cheap and the American company for which her father and his colleague work pays for all their expenses. To add to her excitement, her mother has given her a ring to wear for the night, a ring with a single perfect pearl, as precious in her eyes as treasure from a bygone era of sultanas and queens. The pearl is so white and lustrous, so completely sufficient in and of itself, lucent and gleaming, that she cannot help but gaze at it, glancing down every few minutes to admire its beauty on her stubby finger.

Downstairs, the adults gather in the living room for cocktails, hors d’oeuvres, and small talk. She approaches the sofa where the wife sits with her legs properly crossed, her hair, helmet-like, back-combed and smoothed over, sprayed into submission. Leaning shyly against the side of the sofa, she deliberately places her hands on its arm in front of her, ostensibly to support her weight but, in reality, to display the pearl ring to the fullest advantage. She can still see her small hands, with their pudgy fingers and messy nails spread out on the stiff upholstery, the white of the pearl shimmering against her brown skin. She remembers hovering, leaning in, her eyes fixed on the wife, willing the sophisticated adult to notice her ring. Finally, her efforts pay off. “Oh my!” the guest exclaims, “that is a pretty ring!” She beams at the nice lady, drawing her hand up to allow her to admire the pearl more closely. Satisfied, she leaves the adults to search for the boys.

At one point in the years her family spends in the Philippines, they embark on a road trip with her father’s colleague and his wife and sons. They leave the city of Manila in three cars and very soon, almost immediately, are driving on roads barely free of swamp and jungle, darkly verdant mountains threatening to close in on them from every side. Early in the trip, she finds herself a passenger in the wide sedan driven by the colleague, his wife next to him. She is alone with the older son in the back seat. It is exciting, unusual, to drive with parents who are not her own. To be the lone representative of her family. To exchange information with a boy, a boy her own age, until recently unknown to her, a stranger. She absorbs his difference, his strangeness, his utter whiteness. She is brown, a mixture of Anglo and Latino or, as was more commonly said then, Hispanic. Her hair is long, a thick dark black, like the hair of the maids, of most of the girls in Manila. The boy sitting next to her in the car speeding down a road that cuts through dense, compacted tropical growth is, to her, different, other. His crew cut looks bleached, his skin translucent, his eyes shallow pools rather than deep wells. At one point, they position their forearms side by side and compare the different shades. She is curious about him, as he is about her. They talk about their birthdays, their favorite foods. She thinks she knows what adoption means but is too shy to ask. Inspired by the attention, by the complicity of sharing the private and the personal, the boy reaches into a bag at his feet and lifts out a glass bottle of pills. “Look! This is my brother’s medicine. He has to take it every single day,” he says, as his eyes search her face for confirmation of the value of his contribution to their conversation, for appreciation of the insider knowledge he offers her.

Suddenly, seemingly out of nowhere, the mother’s hand flashes out from the front seat and strikes the son across his face. The slap seems to reverberate in the stunned pause that follows. Time, for her at least, slows down as she, in shock, watches him hide his reddening cheek with one hand, tears springing into his clear light eyes. She can still see him, even now, years later, looking at her—this time mortified, humiliated. She does nothing, can do nothing. If she could go back in time, she would wait until the mother’s attention returned to the road unfurling in front of their car, and then take his free hand, his left hand, the one that had lain next to hers to be compared, and she would hold it. And maybe, if she was brave enough, she would roll her eyes in the direction of the mother, silently, secretly, insubordinately communicating her support. Instead, she only stares, acutely aware of his misery, but helpless, scared, embarrassed herself. Before turning around to face the front again, the mother hisses, “You never talk about your brother’s medicine with outsiders! Do you hear?”

Two days later they have reached a resort deep in the countryside, far from the city. Its extensive grounds overlook a lake. There is a pool, two restaurants, a playground with a squeaky metal seesaw and rusted swings. The architecture is all arches and courtyards, the décor all heavy wood and white stucco: the aesthetic legacy of Spanish Colonialism. Nature, however, lies just outside, close by, waiting to reclaim its territory with vines and ferns, drenching rain and monsoon winds, humidity and mold. For a reason she does not remember now, she is in a deserted dining room with the younger brother. She hasn’t spent that much time with him since she considers him a little boy at five years old. Although she does not know what leads up to the push, she does remember being shoved violently backward, her head landing on the sharp edge of a chair, and lying, stunned, among a thicket of wooden legs and table bases. Soon enough there are adults. She is helped up—questions are asked, her head examined. She can still see the blood on her fingers after she tentatively explores the throbbing spot on her scalp. She can still see the mother leading her younger son away, arm around him, protectively, almost comfortingly. Today, she still has a scar, bald and raised, its permanent pallor startling amid the darkness of her hair. She still feels the injustice in the lack of consequences for the younger son. In his getting away scot-free. In the difference between a slap on the face and an arm on the shoulder.

Decades later they are back in California. She learns from her father that the older son of his colleague in Manila all those years ago is estranged from his adoptive parents. She learns that they both graduated from the same large university, but she never saw him in the throngs of students on campus. She learns that he has broken ties with his family; they only hear of him from time to time, second- or third-hand. She is sad for him, still seeing the humiliation in his eyes and remembering his mother’s violent antipathy. She knows now, as an adult, that the mother favored his younger brother. She wonders why. Was it his personality? Was it the inherent cuteness of the smaller boy? Was it something unknown—a mysterious quality the mother herself may never have acknowledged? She knows that as a child he was more neglected than treasured. She wants to believe him liberated now, but suspects he is more lost than free. She wants to believe him happy, but fears he is more forsaken than beloved.

Marianna Marlowe lives in the San Francisco Bay Area. After devoting many years to academic writing, her focus now is creative nonfiction that explores issues of gender identity, motherhood, feminism, cultural hybridity, and more. Her short memoir has been published in Hippocampus, Motherwell, Raising Mothers, Mutha Magazine, FORTH Magazine, and the Same, and she is currently at work on a memoir in vignettes titled "Portrait of a Feminist."