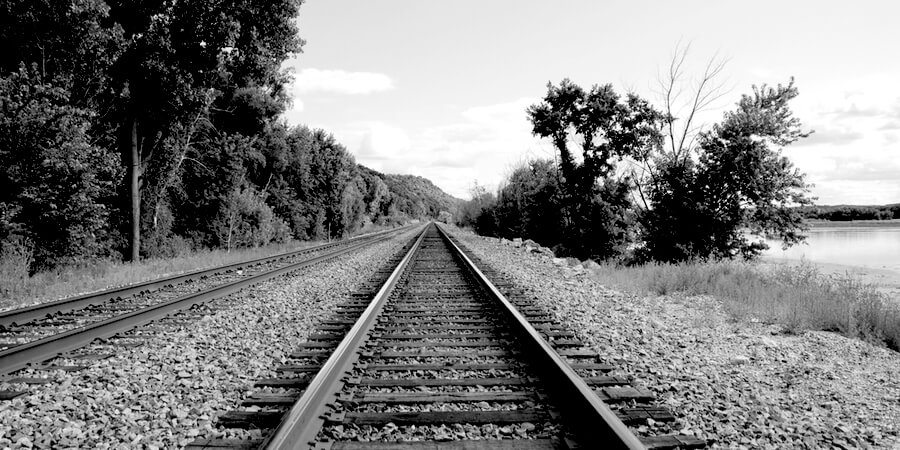 Locomotive, set at odds with us, like a dead god.

A god who always been dyin’, dyin' down the track.

of shucked corn—stillborn on cobs in Missouri fields

where buried effigies and pedigrees remind us —

expect a resurrection. We dream you, like the No. 16 Engine,

you still out there—chuggin’, chuggin’

down the River Runner Line,

down to Kansas City—Dyin', dyin',

we been kickin' up muck, n' the shit that get stuck

‘Till that oil sheen becomes a mud pie,

with marshmallow eyes and smiles slide

down your face, dropping off into rich earth.

Dismemberment—the name given to coordinates

we do not possess—the place where infinite excess

Hierophant of cabooses—who will come to pass by

only in the later and last days. Conductor—paid spokesperson

and prophet—we remember your lumbering voice—

flooding like incandescent light, a soft white pouring from fixtures,

squeezing itself between door hinges and dining cars,

and emerges as statement—all aboard who's commin' aboard.

I don't think, for example, Im’outta my mind.

‘Cause, you see, the Missouri runs north and south.

So, you see, we're either going north or south.

He tell me everything, he tell me this train

goes straight through to saint Louis,

just follows the old Missouri where

dismemberment is a mud pie in June

crossing the entirety of you.

You see, I never rode the train before.

I only got close to the startling metal body

that once. Then, I watched the stars change.

The stars are a bridge over the water.

It's just this road!

Don't ya see that little town

there, they have tractors they don't use.

I give thanks to the dead.

Hell, I’d like to thank all the dead people

who are not here

for not making it

because so many of the dead,

To await the guest,

The face I’ve made

for the dead, I’ve made

The deer in the woods is a buck.

In the woods at dusk, nothing is visible.

The woods are a sometimes father.

At times, a father can become invisible.

But the spiced smell of his Copenhagen longcut

always dribbles over the balcony railings,

whenever he’s decided he’s on the hunt,

whenever deer gather around the wicker furniture

before they become casualty—

who wants to be left alone,

begins the killing of things

to end his loneliness,

to release the solitary feeling of death

which sometimes finds him

on the balcony, at dusk

when the flask has gone empty in his hand.

Aaron Graham hails from Glenrock, Wyoming, population 1159, which boasts seven bars, six churches, a single 4-way stop sign and no stoplights. He served as the assistant editor for the Squaw Valley Review, is an alumnus of Squaw Valley Writers Workshop and The Ashbury Home School (Hudson), and was recently the "Cecilia Baker Memorial Visiting Scholar" for the 2016 Seaside Writer's Conference. Aaron is a veteran of the wars in Afghanistan and Iraq where he served with The Marine Corps' Human Intelligence and Counterterrorism Task Force Middle East as an analyst and linguist. His work has appeared in Cleaver Magazine, Print Oriented Bastards, SAND, The Tishman Review, Rising Phoenix, The East Bay Review, Zero-Dark-Thirty and f(r)iction, His poems have been Finalists in the Tishman Review's 2015 Poetry Contest, Tethered by Letters' 2016 Poetry Contest, Sequestrum's New Writer Awards, and was a national finalist for The Luminaire Award. His chapbook "Skyping from a Combat Zone" was Shortlisted for Tupelo Press’s 2016 Sunken Garden Prize. His first full-length collection, “Blood Stripes”, was a finalist for Tupelo's 2015 Berkshire Poetry Prize, his poem, "Olfaction", won the Seven Hills Literary Journal's Penumbra Poetry Prize, and "PTSD Poem #12" has been nominated as "The Best of the Net". Aaron is currently ABD for his PhD at Emory University and serves as a Lecturer of English at Kennesaw State University.