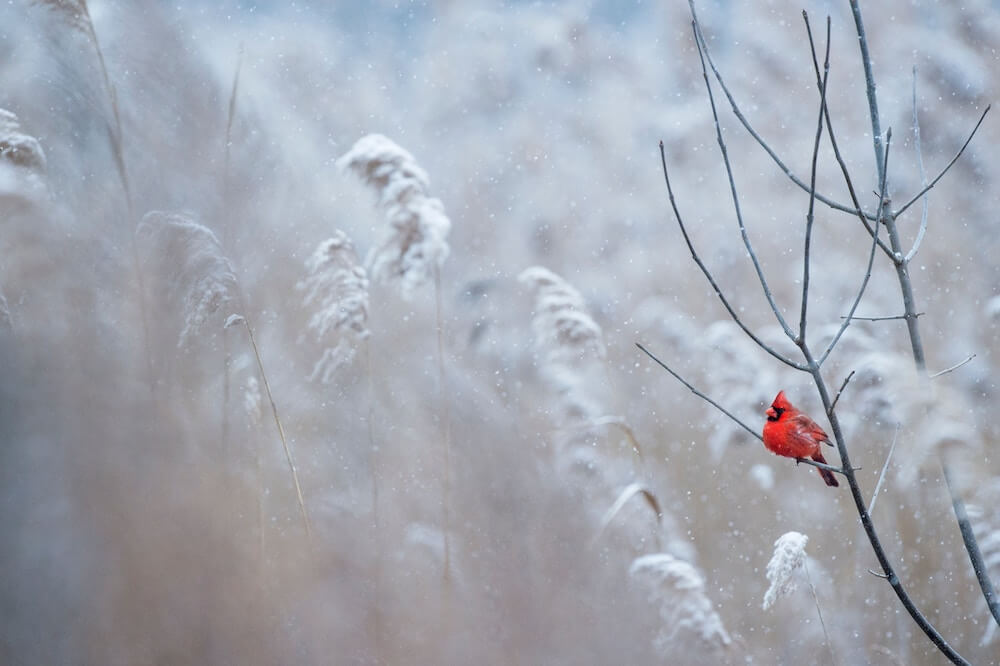 “Lake-effect snow is produced in the winter when cold winds move across long expanses of warmer lake water, providing energy and picking up water vapor which freezes and is deposited on the leeward shores. This is described as an ‘Orographic’ effect, and the areas affected by lake-effect snow are called snowbelts* that are awarded enormous amounts of snow each winter.”

“…when a cardinal appears in your yard, it’s a visitor from heaven…”

The driveways on Verona, the street next to ours, were all snowbound, and I walked up to a home whose drive looked in need of a good shoveling. I rang the front doorbell, and Boubi, recognizing me as the paper boy, gave me a thumbs up to clear out her drive. She was a widow, her children were grown, gone with these chores now on her frail shoulders.

She bundled up and walked me back to her detached garage showing me the snowblower that had been used by her late husband, telling me that I could use it IF I could get it started. The pull chain was not easy, but I was young, strong, motivated. It started and she went back indoors where it was warm.

Snow-blowing isn’t tough if you’re fifteen: cloudy, with wind and snow that after-school late Friday, with the money earmarked and the snowy streets muffling the sounds of cars that infrequently drove by.

I continued, pushing the snow blower forward and back as I worked my way toward the apron of the drive, occasionally pausing to re-aim the snow towards one side or the other.

My back was to the street as I stopped for a moment, looked around, and went a few feet forward before backing up to clear the apron. Doing a few feet at a time, I was about to back up into the street before going forward again when I was distracted by a bright something on the tree that arched high above her house—just a resting cardinal.

Pausing, I looked for a few seconds when a thirty mile-an-hour wind brushed by going west, grazing the back of my coat. The car had come out of nowhere and continued past the youngster with the snow blower—me—who had thoughtfully—accidentally—stopped to allow him to drive on without veering, with the cars’ lights disappearing into the hazy distance. I hadn’t a clue that the car was there until it went by, and the small bird that had miraculously caught my attention was gone. I was cold just for a moment as this miracle briefly smiled down at me.

I finished doing the apron, put the snow blower back into the garage and rang the bell to collect my $3.50. Sabbath evening, but I saw no reason to hurry home for dinner, enjoying the borrowed time I’d been forever blessed with.

Stuart Terman is a physician, previously Assistant Clinical Professor/Ophthalmology/Case Western Reserve and also attending ocular surgeon at the Cleveland V.A. Hospital in his home city of Cleveland. He is now retired.