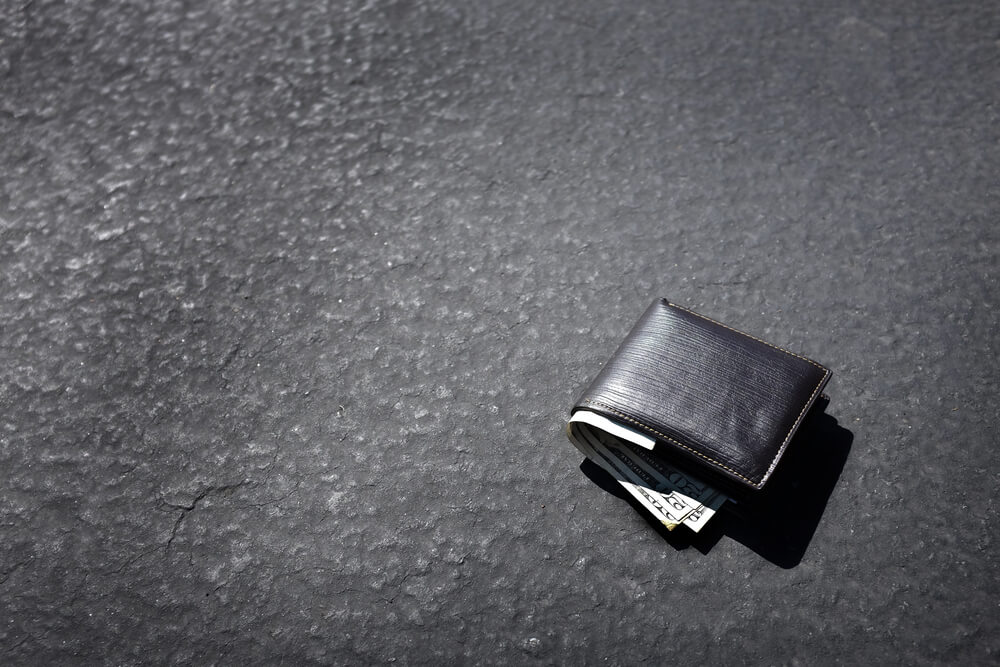 I found a wallet on a sidewalk in the Miracle Mile area of Los Angeles. I might have missed it if it wasn’t white, beautiful white leather reflecting the glow of a distant streetlight. I looked up and down the boulevard. Although lined with multi-story apartment buildings, it was completely empty and eerily quiet. It felt as if the entire city stopped what it was doing to watch my next move. Looking inside seemed like an invasion of privacy, but I couldn’t think what else to do. So, I carefully opened the billfold. It was loaded with cash and credit cards.

Nestled in the side slots were driver’s licenses from two states – Oregon and North Carolina. There was also a green card. This guy was from France and at thirty he was half my age. But I couldn’t find a phone number. My first thought was to mail it to his most recent address, but that wouldn’t help him while he was traveling. He had an uncommon name, so I did a search on my phone to see if I could find his email address. My heart began to race. There were pages and pages of search results, all for a professional basketball player who inked a $120M contract with the Charlotte Hornets.

To put this into perspective, LeBron James signed a $154M contract with the Lakers, so this guy wasn’t a B-list player; he was an A-list player. I thought the name might be a coincidence, but the picture on my phone clearly matched the driver’s license. He played in a French league before being drafted in the first round by the Portland Trailblazers and then traded to the Hornets. That’s why he had a green card and driver’s licenses from both states. I fantasized that he would send an impossibly long limousine to pick me up and take me to an arena where his team was playing. Security guards would escort me to the locker room where I would deliver the wallet amid a crescendo of cheers and high fives from his teammates. But alas, it was off-season, and he was likely in L.A. on vacation.

I naively sent him a message on Facebook that said, “I found your wallet, please call me at...” But then I looked to see how many followers he had – over a million! It wasn’t likely he would see my message any time soon, if at all. The wallet seemed heavier in my hand and I began to feel discouraged. Then it occurred to me that if I turned it over to the police, they might be able to get in touch with him. But this seemed like giving up. I love solving problems and it would be hard to abandon this one. But I couldn’t think of anything else to do, so I started walking toward the local police station. Suddenly a homeless person emerged from an alleyway pushing a noisy shopping cart, shattering the silence of the night. He paused to pick a cigarette butt up off the ground. I passed him without making eye contact thinking it was lucky for the basketball player that I found the wallet first.

A few yards ahead was a luxury apartment complex with a security guard stationed outside. I thought he might have an idea of what to do, so I stopped and recounted the evening’s events with emphasis on the celebrity aspect. Unbelievably, he said he might know someone that could get in touch with the wallet owner. I watched in amazement as he called someone on his phone speaking French and somehow arranged for the basketball player to meet me. It wasn’t long before he arrived in a large white SUV. He was casually dressed in wrinkle-free I’m-on-vacation-in-L.A. attire and was so happy to get the wallet back that he bent down to give me a big hug. I felt like a hero – a very short hero.

Six months later I found myself walking in a very different area of L.A., in the gritty tourist section of Hollywood Boulevard. There was a tall homeless man with long hair and a blanket on his shoulders walking a few steps ahead of me. For some reason, he made me think of Diogenes, the Greek philosopher. Diogenes was a really cool dude and possibly the first hippie. He was lying in the sun one day when Alexander The Great stopped by and said, “Diogenes, you are a great philosopher. Tell me what you want and you shall have it.” Diogenes replied, “Can you move out of the way? You’re blocking the sun.” It’s not surprising that Plato once described him as "a Socrates gone mad."

I was only a few paces behind the modern-day Diogenes, and I think we both saw the fat black wallet lying on the sidewalk at the same time. He quickly bent down to pick it up. I could see it had several greenbacks poking out, and I imagined he thought this was his lucky day. No need to panhandle for dinner! Or maybe there is enough cash to get a safe place to sleep.

Diogenes looked around, I presumed to see if the coast was clear for him to stuff the wallet in his pocket and hurry along before the owner showed up. But instead he just stared at it for a few seconds, and interestingly enough, did not open it to see what it contained. Looking up, he spotted a police car in the center lane stopped at a traffic light. To my surprise, he ran across two lanes of cars to the open window where a young policeman wearing sunglasses in the passenger seat was eying him warily. Diogenes was holding the wallet out in front of him. Racing to do a good deed, to return a lost valuable to the authorities.

As he approached the police car, the cop raised his hand and yelled at him. "Get back on the sidewalk!" Diogenes paused for a second in seeming disbelief, and then reluctantly retraced his steps back to the corner. The light changed to green, and the police car pulled away. He was left standing there dumbfounded, still clutching the wallet in his outstretched hand. I felt confused as well, but at the same time thinking I’d just witnessed some profound event.

The Greek Diogenes would walk the streets of his ancient home city in daylight holding a lantern in front of him. When he encountered someone who asked what he was doing, he replied, “I’m looking for an honest man,” then continued on his way. Instead of a lantern, the Hollywood Diogenes held a wallet, and I imagined him walking the streets of L.A. looking for someone to acknowledge his honesty and take this gift from him. He might be walking for a long time.

He was still standing on the sidewalk with the wallet in his hand, unsure what to do next. Somehow I knew he would find a way to get it to the owner. I recalled my celebrity wallet experience and felt guilty for assuming that the homeless person I passed on that dark street would have kept the money instead of trying to return it to its owner. Diogenes’ choice to do the right thing was much more profound than mine. My life wouldn’t have changed with an extra $500 in my pocket. He might have avoided getting sick, being beaten, or even killed if he kept the money. Or maybe in his mind he didn’t have a choice to make, and there was only one thing you could possibly do with a lost wallet. I thought about saying something to him. Like to thank him for trying to do a good deed. Or to tell him not to despair that his gesture was rejected. But not feeling worthy to offer praise or consolation, not able to improve upon the majesty of this scene, I just stepped out of the sun and continued on my way.

Although Steve Kowalski is the Chief Technology Officer at a financial services company and has a Ph.D. in Computer Engineering, his passion has always been in the arts. His path to writing has come through storytelling and spoken word and he frequently performs at shows in the Los Angeles area.