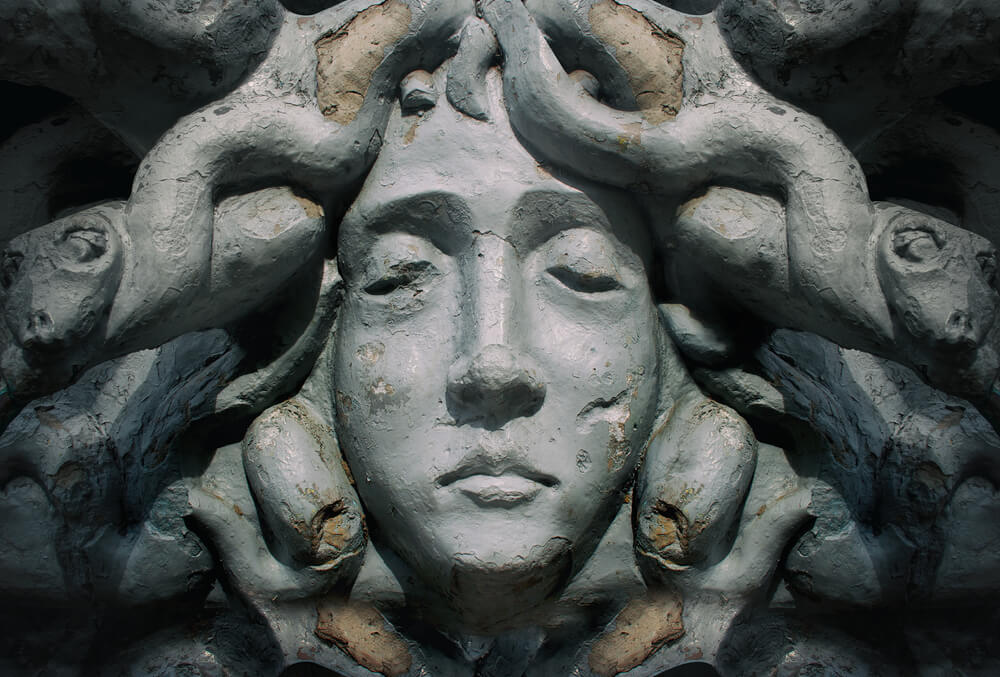 That night in the temple, when he hurt her,

the asps found her ravaged, her hair tangled;

they buried their tails into her scalp

as tree roots sew into earth and soil.

They kept her safe from his sea, enthralled her,

and pointed with their tongues to her escape.

They guided her through meadow and forest

to a quiet cave high atop a cliff.

She crafted many fires there in the dark

to burn away his smell and cleanse her skin.

The snakes whispered their scent into her ear;

she bathed in their musk to make it her own.

When she lay down and closed her eyes to sleep,

their thin bodies would move beneath her neck,

soothe her like a mother’s hand when she cried,

nudge her awake when they smelled men coming.

Sweat and salt, their swords stunk of sex and violence.

Each man shuffled into her cave and wept;

they beheld her strange face, and with one look,

they stiffened and turned into cold granite.

The asps watched as Medusa chiseled off

each penis, felt the weight of them in her hand,

walked to the cliff, threw them into the sea.

You live a banjara life for him

pack your saris and kurtas into squares

swatches of orange, gold, and blue fold them

into a new place, but not for too long.

You leave your home and your temples,

wear the threads given to you,

and never take off your mangalsutra.

He follows not far behind your shoulder

Ten years and more, still he will not

lie under your sunshine and rest.

in a cage of skin

but carry with us

we're ready when it arrives

the end will feel breathless

that punctures your faith

music plays down the street

women scream for their babies

their boys their sweet boys

on the table set for zero

the neighborhood lit up with

no hearts beat in a street of death

so many bodies lined up

a leg a chest a face

all of them beautiful boys

three-hole punches in their stomachs

too many to count

more and more on new boys

they lay upon the death slab

asphalt the color of violets

their skin encloses them

Brittany Mishra helps make airplane engines for a living and writes poetry and fiction as her passion. Originally from the Pacific Northwest, she now lives in New Britain, Connecticut where she is a board member of the non-profit Riverwood Poetry; she helps find local poets to host monthly readings or workshops for the Central Connecticut community. Brittany's poetry can be found in Shabda Press' Nuclear Impact Anthology and the online journals Voice Catcher, Sky Island, and Typishly.