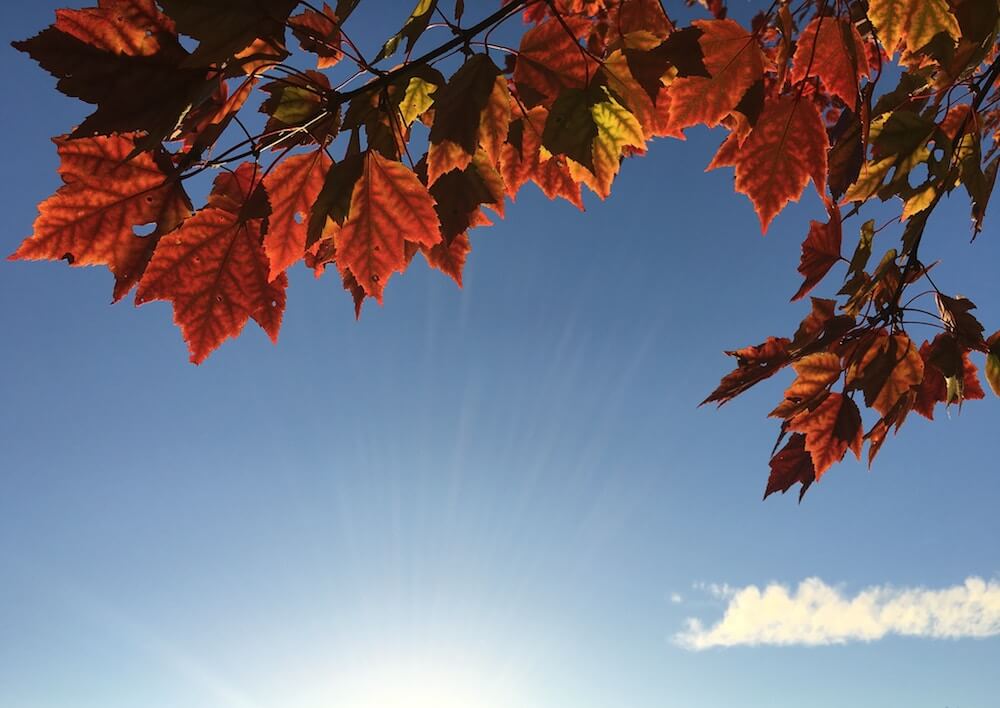 At the heavy sound of human feet,

While snails recoil and pretend not to be home,

And moles find refuge beneath the sod.

But how does a maple leaf keep its secrets?

Trace its veins in the morning sun,

Or count its points or shades of green,

Still the unaided human eye is not enough

To know its essence or internal works.

See even bees and ants as hominoid:

The fertile female lays eggs and eats all day,

And though she never gave an order or wrote a law,

We call her “queen.”

We change our take on language

So we can say Nim Chimpsky “said”

Sometimes we look so hard we cannot see.

Sometimes we look and refuse to see.

Nature may be hidden from human sight,

But she is not always hiding.

It Could Happen To You

On the back porch strewn with autumn leaves, the guitar rests in his lap

As he is looking up at a Beginner’s Guide book.

He tries to wrap leathered fingers around the smooth wooden neck

Frowning with concentration, he adjusts the body against his own.

He wills himself to do it.

This is the hardest moment.

This is the longest moment.

This moment has been in him since the first chord he’s ever heard.

Until now he could hide behind “I wish I could”;

Hide behind all the things he is and has done.

Now he either sees this to the end or admits defeat.

Now he finds out if he can bend his fingers to his will;

If he’s got rhythm;

If he cares enough to put in the effort.

It’s time to replace his dreams with living.

He pins the strings down behind a fret

Plucks the note with a worn and aged fingertip

Overeager it twangs out in a tremulous waver,

It is not clear, it is not full

But it is his, he made it, he wrung it from this lifeless box of wood and metal.

No note will ever be this hard again

Or cost so much

Though many will not be easy.

For hours he sits and learns, note by note

He plays on foggy days and in the summertime as notes turn into chords,

Turn into melodies, turn into songs — this love is here to stay.

No blue rhapsody can be heard from mere wanting and wishing,

But each attempt at doing could potentially be a symphony.

How far apart are they on taste and truth?

An awful taste that nearly makes her cry.

Her hair emits a pear and lilac scent;

But he prefers a sandalwood accent.

The weather suits him best in mid-July;

A season she would rather let fly by.

To join together seems a grave torment.

Both like to plant sweet peas and watch them grow;

Would gladly dress a wound but never cause one;

Hope to drain the swamp of filth and stink;

Prefer a happy life to one of woe;

Wish harm and unearned misery on none;

Have more beliefs that fit than those that don’t.

Nicole Braden-Johnson has published poems in her monthly poetry column "Unheard Melodies," featured in the local publication The Visitor, as well as in the undergraduate art journal Spires of her alma mater, Massachusetts College of Liberal Arts. Additionally, she has a poem co-authored with her husband, David, forthcoming in The Mind's Eye, MCLA's Liberal Arts Journal. In 2016 she received her M.A. in English from Westfield State University. She lives in Conway, MA with her husband and numerous companion animals.